Depends on the store. Some are down to $75 that i see in my price checker. My local store has 7 still in stock, so waiting to see if they drop more.

None have shipping available, but here is 3

D amn you, my daughter works across the parking lot from No Smith Lowe’s.

Lol here we go. This is not a coincidence either, better get her to pik one up after work.

Lucky for my wallet she won’t be out till 11-12:00. There’s always tomorrow though

Ya there’s prolly no escaping this deal. Call it an early Xmas present.

Last week there was one on clearance for $2 at a store near St. Louis. I ordered it with store pickup and amazingly got notification it was ready for pickup. When my “business trip” to the area was “canceled”, I called the central number and asked if they could request shipping it. Just received UPS notification for delivery tomorrow. I haven’t seen an extra charge for shipping. Maybe it slipped into the Black Friday free shipping offer. Score! 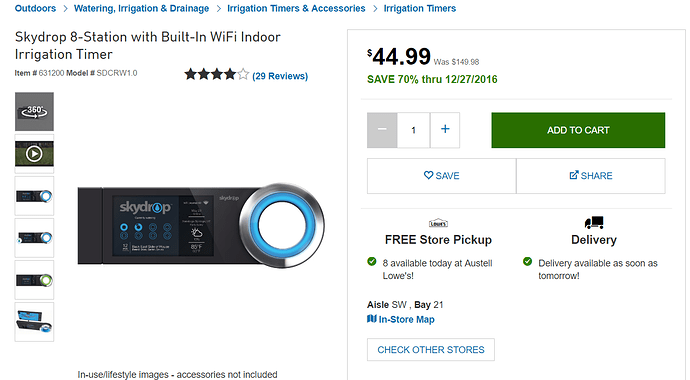 Don’t even have a sprinkler system but figured I better get one anyway! 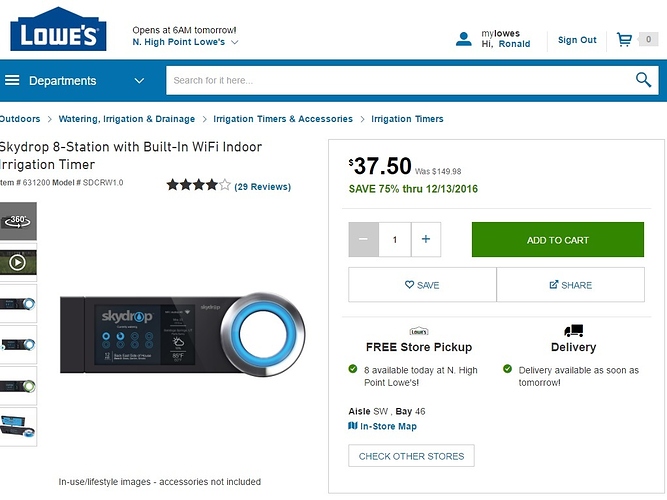 Looks like the deal goes until 12/13, which is nice. I will be in NC next week and can drive to High Point where they have these for $37.50. They have 7 in stock, hopefully there is at least 1 left next Saturday!

They have 7 in stock, hopefully there is at least 1 left next Saturday!

Order now for in store pick up. I believe you have 7 days to pick it up before they cancel the order and return it to the shelf

crazy how they have this listed for $299 at my store

too bad they don’t ship…

FYI they charge to use their app, apparently they started doing that recently and screwed over everyone who bought it expecting full control without fees.

I have been using Skydrop for about 6 months. I have not been paying for anything related to the app. I wonder if this is for new accounts or perhaps specific functions within the app?

I just bought a refurb Skydrop directly from Skydrop for $89. There is NO FEE for their app or monthly charges.

Looks like the basic app is free. There may be a “plus” app that will have a monthly fee.

It states in the app description that a “plus” subscription is required to unlock some features, there are many negative reviews that claim basic remote control features that were once free are now part of that $6 monthly fee.