How come there are times when the app itself does not show the correct status? As shown below, the app shows the switch is off even though the last activity for the switch was to turn it on. It’s turned on/off through automation to reflect SHM’s armed mode. Any ideas why the status are not in sync? 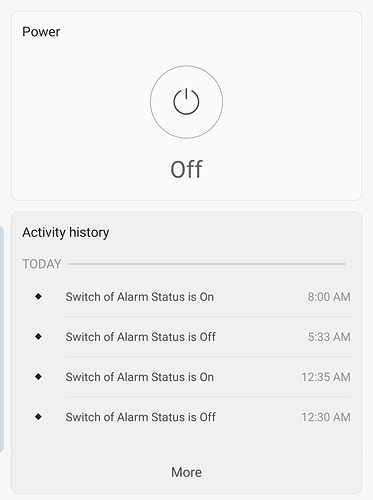 By the way, it reflects the correct state in actiontiles, ST IDE, and sharptools, which is set to ON. Its onlynin the app that it displays off

I am having the same issue, my logs appear correct but the button appears out of sync. When I align the switch in the app back to the correct state, I do not see a record of that being logged. However, if the switch is not displaying correctly, the next automated action for that switch does not execute. Its is strange. I am trying to eliminate possible causes. Would you share what devices or services you have given this switch access to?

Yeah it’s quite a mystery. It shows the same thing on my wife’s phone so I’m guessing it’s an app bug. I actually have 2 virtual switches and the other one also behaves the same way where the app is occasionaly not in sync with everything else that uses it.

Right now, I use the switch in the new ST app, SharpTools, ActionTiles, Google Home, Automagic (android through sharptools). I just use the virtual switches as relays to the 3rd party apps to indicate if SHM is armed (stay or away), and the another switch to give a quick status if any of the doors are open. All of the 3rd party apps always display the correct state except for the ST app when it sometimes is not in sync.

Yea, it does appear to be an app bug. It is nice to know its not isolated to my setup. I had begun to disable third party plugins in hopes I would find the gremlin. Keep me posted if you hear anything, I will do the same!