Is there a single Open/Close button I can put on my phone so that I don’t have to open Smartthings app and go to THINGS and hit the garage door button? 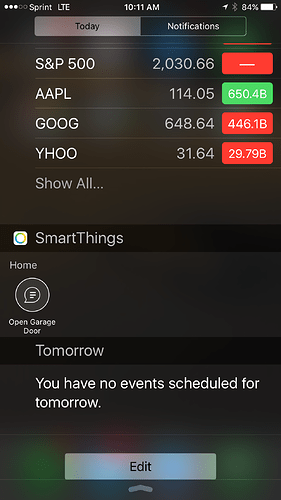 On iPhone there is a widget on the today menu but i can’t get it to work.

I only know Android, but it may help to know that there seem to be two solutions for it:

On iPhone there is a widget on the today menu but i can’t get it to work.

When you press that Open Garage Door button, what happens? Does it flash green? Red?

If you run that Routine from the ST app does it open the garage door as expected?

The widget on my iPhone turns green but no response.
It only opens when I hit the garage door button under THINGS.

Something must be wrong with the way I set up my ROUTINES. I have the LFM20 relay. No problems with that.

If it turns green, then it should be triggering the Routine. It might be an issue with how you setup that routine, but you could check the Messages in the app to confirm that it’s firing the Routine and what action the Routine is taking. Along the bottom of the app, 2nd from right is a little word bubble icon. That will talk you to the Messages/Activity Feed.

I got the “open garage door” widget working on my iPhone. Under routine, I had to turn the switch ON under “lights and switches.” I guess this is the case since I don’t have a tilt sensor yet. I ordered the Ecolink.

Glad you were able to figure this out. If you’re looking for more options, you can also checkout my app, SmartRules, which lets you define rules for SmartThings. One of the triggers is called “QuickTap” which is a button that shows up on your Today screen, or Apple Watch.