I about a dozen of these bulbs setup and working perfectly around the house, but I have a set of 3 in a chandelier and they are constantly going offline multiple times a day. I rarely have all 3 working a the same time. They all have the newest firmware. Any ideas why they might be going offline? Do I just have a few bad apples? Is it an issue 3 being close together? i wouldnt think so as I have 2 in another ceiling light that work fine.

How many zigbee devices do you have? There is a limit of 32 without any repeaters.

Do you have any Zigbee repeaters in your house? Having a few good repeaters can make a hug difference. Also, some devices are known to be ‘bad repeaters’ and can mess up parts of your Zigbee mesh network.

I do not. I have 1 door sensor, and 3 zigbee bulbs upstairs, then 8 zigbee bulbs downstairs. The smarthings hub is upstairs. 5 of those zigbees are in my kitchen and only 3 that are in the chandelier have the issue. There isnt any way to control which ones are repeating is there?

Sengled bulbs do NOT repeat by design. Sengled feels that bulbs are often turned off by a physical switch, thereby killing power to the bulbs. If these bulbs were repeaters, any devices that were using these bulbs would have to find a new repeater to connect to. This causes Zigbee mesh instability. By not including repeater functionality, this problem is avoided… However, it does mean that you may need to add other zigbee devices that do repeat the signal.

There is no way to assign a bulb to a repeater that I am aware of. The mesh network is self-healing and somewhat automagic.

Why not just add a GE Z-Wave Dimmer Switch to control the chandelier ‘dumb bulbs’ instead of smart bulbs. I am guessing you want all three to be at the same dim level anyway, correct?

Well because I already had the bulbs and i have no need for a dimmer and the chandelier is connected to two 3 way switches. Yes, I do think that smart switches are the way to go, but you have to have a neutral most of the time and its a bit more work than screwing in a few bulbs. Obviously not as user friendly as a smart switch, but quick and still a bit cheaper.

Hmm, I still dont think the number of devices is an issue. Ive installed two more bulbs (one even outdoors) with no problems. Im starting to think I just have a couple bad eggs.

Do these bulbs get regularly switched on/off by the three wall switches? If yes, that may be what is causing them to drop off the network. Some bulbs don’t like being power cycled. Just an idea.

Nope, not at all. Ive only had this set connected on this chandelier a couple days.

Ive installed two more bulbs (one even outdoors) with no problems. Im starting to think I just have a couple bad eggs.

Move the “bad” bulbs to a known good location in the house and see if they still have the same issues. If issues go away then the bulbs are fine. This is basic common sense troubleshooting that should be done before even looking on here, but I don’t see it. mentioned.

That’s what I had already stated, they worked fine in individual lamps before moved to chandelier. I just moved them back and they work fine. Since I have other bulbs in that area working fine, I wouldn’t think it would be a distance from the hub issue either.

That’s what I had already stated, they worked fine in individual lamps before moved to chandelier.

I just moved them back and they work fine.

Then your bulbs are fine. You do NOT “have a couple bad eggs” as you put it.

You either need to add more repeaters near that chandelier, or get a new chandelier that doesn’t block the signal. You have to just try different things, the wonders of wireless.

My apologies, you are correct. I was confusing the troubleshooting I had been doing in live chat with homeassistant folks about the issue. I will look into a repeater or moving my hub. Thanks.

As odd as it sounds, you might also want to check the wiring in your chandelier. I had one overhead light that was less than 30’ from my hub and any smart bulbs I would put into it would consistently stop working a few hours after screwing them in. After testing the fixture, it turned out to be that the wiring going to the fixture was bad and the fixture would lose power in “blips”. Those power drop offs were enough to knock the smart bulbs out for up to a second and therefore would drop them off the network.

If it only happened every few hours, how did you end up testing it?

Standard volt meter on the contacts where the bulbs go in.

Then I had an electrician come in and replace the wiring.

Have you tried forcing a rebuild of the zigbee mesh by removing the battery/power for 15 minutes? I had a few repeat offenders that were fixed this way. Since the bulbs used to work in your lamps and now they don’t work properly in the new location, I think it’s worth a shot. Here’s the thread that turned me on to the idea:

According to a message from support, the Cloud had “hiccups” yesterday. Not a local mesh issue. Many people reported multiple issues including missing and duplicated messages. Also, zigbee networks are easy to heal. They don’t require a special system utility like zwave does. Just unplug the hub for 15 minutes (.including off battery). Then repower it and over the next day or so all the routing tables will automatically rebuild. Also, zwave plus does have longer range than zigbee in ideal conditions, but they’re both in the same range in a typical home automation set up, and zigbee does travel slightly better through water, both rain and water pipes. So range is not usually a big differentiator unless you’re trying to go across an open field on a sunny day. See the range and repeate…

I also ended up adding a smart outlet exclusively to act as a zigbee repeater: 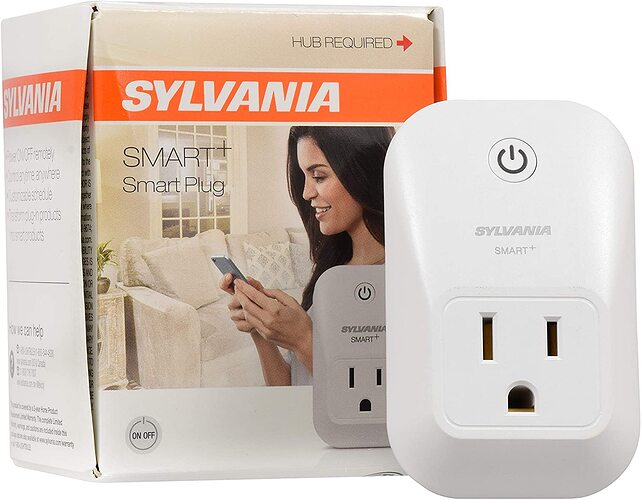 Size:1 Pack Make any outlet a smart outlet. The SYLVANIA SMART+ ZigBee smart plug is simple to use and easy to connect to your compatible smart hub. Run your home on...