I installed a GE light switch long ago, i wanted to buy another one is there any way to see the model number in the smart things app?

Or do i have to pull it out of the wall since it’s probably on the back.

Just get the updated Z-Wave Plus models. They look the same but have more useful functions such as double tap up and double tap down for 2 extra buttons.

What are the extra buttons for? I just need a simple on/off.

I thought the same as well. Then the more I expanded, the more I realized how beneficial buttons were. However, I think there is a white label on the front of the switches that you can see when you take the cover plate off.

I use the extra buttons for all types of cool stuff such as run Routines, Set Modes, Execute Pistons…

Here’s an example of one Switch doing multiple functions: 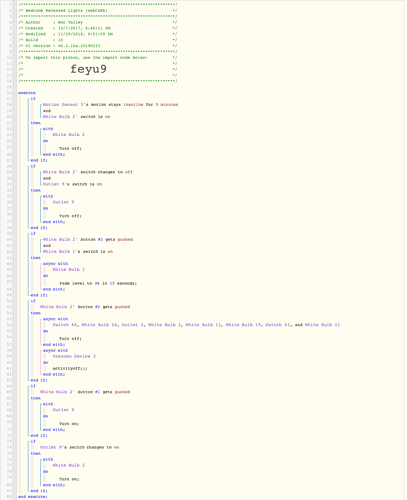 Are there any that show power usage like some of the outlets?

Someone pointed me to GE brand Zigbee switches. They’ve got models that do power monitoring.

Based on what I’m reading about general z-wave problems, I’m thinking of doing Zigbee instead of z-wave