Currently I do not think it can be done. At best, you can get a text notification on the info bar at the top. The clip seems to be a demonstration of a TV that is using the fabled “Extend USB adapter”. When / if the Extend device does become available, a separate V2 hub would not be required as one is contained in the TV (minus the Zigbee and Zwave radios which is rumored to be contained in the Extend or the extend enables the radios).

Here is a link to the Extend for a little more information:

RICCI Thanks for you help on the CoRE piston for notification on the TV. You made it so easy for me

It seems they have an early access program for it but invite only. Would love to be a part of it if someone could send me an invite.

At one point there was a place where you could enter an email address for, I think, getting on a preorder list. I haven’t been able to find it again. There hasn’t been much visable movement on the Extend since CES 2016. If they are still working on it, maybe they will use the new DTH and integration to to look for victims, I mean possible volunteers, for the invite list.

Does anyone know how to monitor the power state of the TV using CoRE? I’d like to change lighting states when the TV is on.

You could use switch>(TV) changes to on to control the lighting.

IF
● TV switch changes to on…

Hmm, mine doesn’t show up as a switch. But I did just find it listed under light bulb devices.

Now I have a problem that the TV device is constantly cycling on and off, even though the actual TV isn’t changing states. Anyone else seeing this? 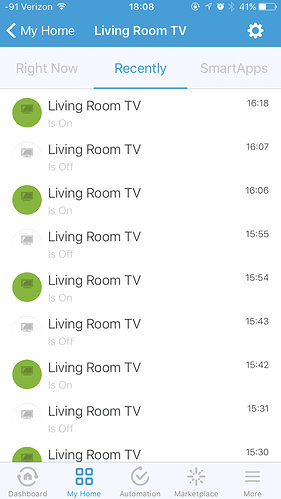 Mine is also under bulb capability but the switch attribute does not show anything related to power,. I am not seeing the power cycling in my recently section for mine.

Did you ever find a way out of this loop?

I had to remove my TV from Smartthings.

Now when I go back to add it, it just keeps asking Allow /Deny on the TV. I hit allow and nothing happens in the app. After 30 seconds or so the allow / deny message comes back on the TV and the cycle repeats.

Hello there, i have a Samsung UE55F8000 tv. I’d love to just be able to turn it on/off with a simple devicehandler. Can someone help me with this please? Ik dont need all the working functions of a tvremote.

See this support article to verify:

Samsung TV as a Thing

Samsung TV as a Thing, like other smart devices, can be connected to your Hub and included in SmartThings Routines and automations. You can also adjust select TV controls from the SmartThings mobil...

My tv/model is not in the list of available tv’s that can do this. I was wondering however if there is some 3th party DH that finds a workaround for this. The only thing i want is turn the tv on/off via ST.

I finally have my tv under ‘things’. Everything works on the smartapp, except for ‘on’. ‘Off’ however works fine, just like every other function. Can someone help me with this? 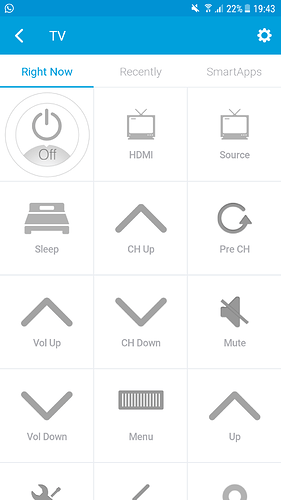 Is that a custom DTH? Which TV do you have? I only get a fraction of the above icons you are seeing.

Thats my tv. To be honest i have no idea wich of the DTH its using now, this popped up yesterday when i tried once again, it never used to work before. Look at the data from the screenshot, makes no sense, yet it works partially. Any idea what i can do to make it work properly? 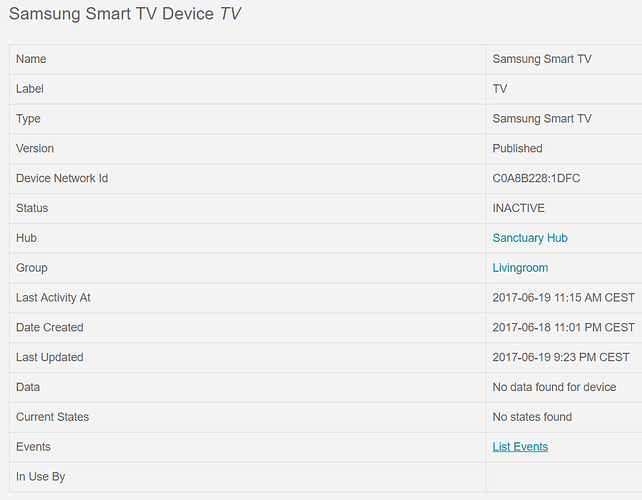 I don’t think you will ever get on to work. It Network is off so it will never hear the command to turn on. Be nice if there was a wake on lan.

This cant be made possible by adjusting the code of the dh?

If the tv had that feature I’m sure it could.

Tech support tells me that Samsung TV’s won’t connect our V2 hubs in Canada, tried connecting my new Samsung KU7000 for the past few days with no luck, contacted Tech support this morning and sounds like Canada is SOL with this.