Thanks for the reboot tip, however that didn’t seem to make any difference. It says “Discovery Started!”, but then never finds the TV. Any other ideas? I have a Harmony, so no big deal if it doesn’t work, but I would prefer to figure this out.

@llarson and @Spurlin, Maybe see if there is a software/firmware update for the TV.

It is. I emailed the ST support team on Sunday on they replied,

"I took a look for myself with a TV we have here for testing purposes. I was able to reproduce your experience.

I am currently, working on a solution here for you. Since it is Sunday a majority of our crew is out, but I wanted you to know that I have seen your message and I am working on this issue for you."

So at least they are working on fixing what ever is causing the issue.

Does anyone know if the J series SUHD work with ST hub ? I tried today with the discovery mode on but no luck. My TV is UN65JS9000 SUHD curve TV. This is a 2015 model. I wished it would have worked for the price i paid for this TV

Anyone with the 2015 J series model have any luck in making it work. ?

Justin if he was able to reproduce your scenario then he should know how to solve it. Seems like BS.

They wrote last month on the blog that they have given up trying to figure out the migration tool.

Migration Tool
In 2014, we announced the SmartThings v2 Hub as the next generation Hub to replace our initial Kickstarter product. At that time, we were hard at work on a “migration tool” to help users who wanted to transition from the original Hub to the newer model. Unfortunately, after several false starts, we’ve come to the conclusion that it’s not feasible to reliably transfer settings and devices from the first version Hub to the newer model. With that, we are no longer planning to deliver a Hub v1 to Hub v2 migration tool.

We regret that we can’t deliver on our initial promise, but in order to release a migration tool we needed it to deliver a great experience. We found it would be extremely difficult to automatically exclude and shift devices to the new Hub, and we’re unable to meet the expectations we set. Our goal is to always deliver the best mix of features and customer experience, and we regret that we’re letting some of our most loyal customers down.

The compatability page in the marketplace says US models 2016 Series 6, 7 UHD & 8, 9 SUHD. They will have KS or KU in the model number. Others have also stated V2 hub is also required.

It is fairly basic. Power, volume, mute, picture mode, sound mode and the ability to send text notifications to the tv. There is no way to change video inputs/source or change channels. I am pretty sure your Harmony setup has more control. But for those that haven’t gone the harmony route, there is some control if you have the right models.

It sucks I don’t know why they have the limit on 2016 vs. 2015 models. They run the same OS and have the same smarttv features. The only thing I want is the text notifications.

RICCI, Other than CoRE, is there any other smartapp to use for notifications. I havent got into the CoRE scene yet.
Craig it might have to with hardware, Seems like only those TVs that are compatible with thier “extend” are the ones working

I haven’t ran accross anything else that exposes the deviceNotifications () for the TV. Notify Me When could not do it and I don’t have Rule Machine anymore to check. There is a learnig curve with CoRE but it is very flexible and well worth the learning time. The current support seems very fragmented, the only access to sound and picture modes is through Routines and the modes are not an option in CoRE.

Not only year, but models too. I have a J series 2016 that was more expensive than a lower end K model and still not eligible!

Update…or maybe J series are 2015 models? Who knows, all I know is that I cannot add it as a ‘thing’ lol

Looks like someone is still tweaking some things. CoRE now has the setPictureMode(…) and setPictureMode(…) under the TV. I can now change the TV’s sound and picture modes via CoRE instead of having to use a routine. Getting better, but still would like to see a source input for the device. I guess I will have try my hand at an automated movie scene piston. 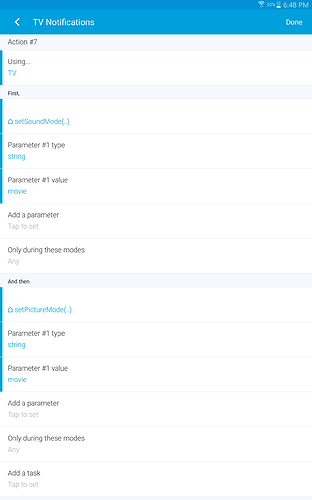 Just install CoRE smartapp, now to learn how to create pistons. Maybe you can post a step by step when you get it notifications running

I have a couple presence and mode change notifications running. I will try to put something together for you tomorrow.

Thanks… hopefully I can find some time to get to know CoRE. My project this weekend is to install home bridge a MacBook.

I’m totally new here so please be gently with me

Anyway actually currently building my smarthome and I’m planning to get the ST 2nd gen and 49" Samsung smart TV (still not sure which one) and also some kind of wi-fi HD video doorbell.

So I’m curious is it possible to connect doorbell to Smart TV? As a matter of fact I would like to get kind of popup at the top of the screen with live stream from doorbell camera?

Has anyone successfully managed to get this working? 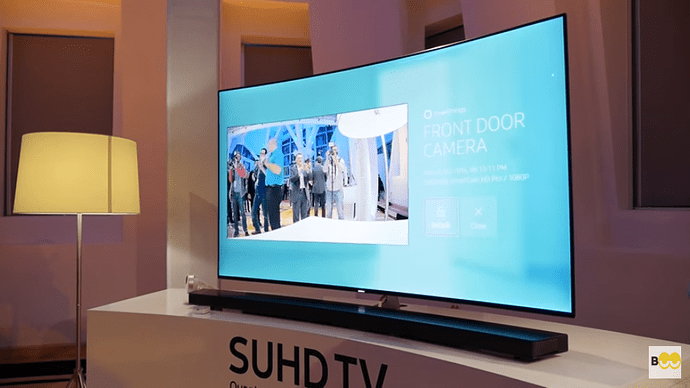