Thanks.
Before trying your suggestion…
re DH, I think I am using BSpranger…from maybe a week ago…how would I check what is being used?
Certainly the tile looks as in the various posts…
In smartlighting,
Only if illuminance is (tap to set)
then I get (greyed out I guess) Beta feature not supported
and also greyed out
Illuminance sensor (you cant currently add this) So, I dont seem able to select a sensor at this point which given it says feature is not supported perhaps is logical !
However,
IS is in bold (equal or higher)
and so is THAN…but if I infill these and SAVE…then back one screen (Only if illuminance) is) still only says tap to set (greyed out)
What value is the illuminance 110,1000,10000 ?!
The motion aspect of the Xiaomi seems to work very well (so far!)
Gavin

Looking at his DH it does NOT have the capability “Illuminance Measurement” if this is the only LUX sensor you have this may explain the message you are getting, as strange as the message is as it cannot find a sensor with that Capability.

I do not have much time at the moment unfortunately but have a hunt above for a DH that does have LUX Capability or perhaps @inpier (Hi Kevin!) may be able to help you out if he has time

You should set the LUX level to be below 5 or so but as each sensor is slightly different then just look at the LUX reading on the sensor and then set it accordingly for the trigger.

Will try the other DH that you suggested… really appreciate your responses, thanks.

Actually just to add in case anyone else has the issue/success with this sensor, the Automation Director says the same thing…you cannot currently add this (illuminance) !

No worries, hopefully Kevin may be able to help you but if not then I will see if I can find the one with it enabled above somewhere when I get a little time. Let us know how you get on.

Update battery back up to 90%

Mine started to report back normally at some stage yesterday also.

Not sure what the ST developers are doing behind the scenes at the moment but I had a load of my sensors suddenly go offline in the last few hours. They are easily restored with a push of the pairing button but I really wish they would stop messing around with the cloud/servers, well at least give us some warning. As great as this system is the software engineers seem to be a law onto themselves not to mention we get zero comms from them before they make changes which inevitably DO affect us!

Is it possible for the Button to register multiple pushes? It seems that if I press it twice quickly, nothing gets registered. Only if I press it, wait a second, and press it again will it register.

Mark,
Kevin has been very helpful and his DH now means the illuminance aspect functions within smartlighting with the Xiaomi. Now I have to find a practical use for it

Can I ask a Q… can a sensor have more than one DH applied to it at the same time?
Thanks for your help, too.
Gavin

You can only have one DH assigned to a sensor but you can have different DH’s assigned to the same type of sensor.
Sometimes when you change DH’s there are residual settings left in the Config screen under the ‘Thing’. I always find it best to go in there, scroll down to the bottom of the settings and delete those lines with the little ‘x’ Not sure if it can effect anything but best do it just in case.

I updated my preference in Temperature from C to F, the background color of the tile didn’t looks the same. Is there a reason why they are different? I think the green color for F is more appropriate than the yellow color for C. 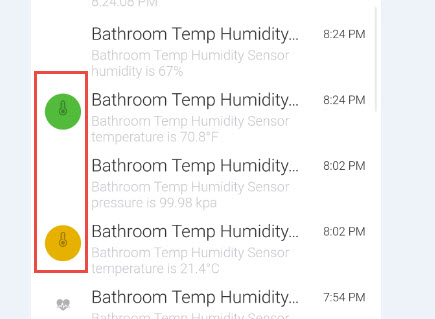 The colour reflects the actual temperature, the colour changes with the temperature, or at least it is most probably written this way but I cannot check at the moment to confirm.

You can amend the DH to your liking. At the top of the DH Code you will see where the settings are for the change in colour. As these are static values and you have changed the ‘unit’ it will most probably not be reflected correctly. You can edit the DH and change the values to suit your preferences. Have a play around but let me know if you get stuck.

I think changing setting from and to C & F should not change the color. Wondering if there’s a bug in the conversion because I only found background color in F in the DH.

Lately, I am unable to keep some of these online. Anyone found any secrets in our months of experimenting? I’m having devices that have been in ST for months, with battery reported, all of a sudden dropping. I have to pull out the toothpick/paperclip to get them back online and they aren’t guaranteed to stay.

The values are hard coded as I mentioned.

So it is still looking at the colour code for the actual NUMERICAL value, it is not differentiating between Centigrade/Celsius and Fahrenheit. You can edit the DH to have 2 separate sections I believe but been a long time since I played. Have a look at a few other DH’s that use temp colours, they may help you.

I am unable to connect a Xiaomi Aqara temperture/humidity sensor.

I tried the catchall method, get the device ID, put in the zigbee and network id, but smartthings values all 0, never receives anything from the sensor.

Tried even swapping the battery for new one without success.

Did i miss anything?

@a4refillpad The temp colors is different than on my other temp devices like Fibaro,Netatmo etc. I use C, and at 22 deg I get a orange color on your handler, green on other devices I changed line 62 to : attributeState("temperature", label:'${currentValue}°', and line 93 to: state "temperature", label:'${currentValue}°', icon: "st.Weather.weather2", Now the colors seem to be converted correctly to C and matches my other temp devices

Try to remove the device and start the process over and use the non aqara device handler for your temperature sensor and see what happens.

I just purchased two of these temp/humidity sensors from gearbest.com and they paired much better than the original “non-Aqara” versions. When I searched for new things in the mobile app the sensors showed up as unknown, then I went into IDE and associated the @a4refillpad device handler and that was it. There non-Aqara sensor took a lot of hunting and pecking for the correct catchall code.