Hey, @erocm1231 that switch you used in post 74, looks like a normal style decora switch, did you modify that to be a monetary switch? The thread you have linked for the Legrand Adorne switch modified doesn’t look like the one in your video. I am looking for the Decora style switch you use in your video.

Stupid question but new to using the IDE in the UK, what do I enter for the repo

To install the app and handlers??

Amazing project BTW, have used a few fibaro’s but ordered a couple of these from china to play with now

It was a normal Decora switch from Lowe’s. I modified it in the exact same way as the adorne switch in the post. I’ve actually done that to dozens of switches and they work pretty well.

Ok, thanks! I got a Leviton switch to try it and it has a metal bracket around the back, making it impossible to pry open. I’ll try a different brand. Thanks again!

I stick a small screwdriver or butter knife in the crack between the paddle and the switch housing (in the middle) and just pry it up.

Ahhh ok - thanks!! I’ll give that a shot tonight.

I was thinking the other day and not sure if this is possible, but would there be anyway to set the switch up where if you single tapped it would do one command, such as turn on just white lights, and if you double tapped it would turn on RGBs?

I was thinking the other day and not sure if this is possible, but would there be anyway to set the switch up where if you single tapped it would do one command, such as turn on just white lights, and if you double tapped it would turn on RGBs?

I definitely have this on my to do list. I have been working mostly on a sdk related bug that has been hard to resolve. This has been taking a lot of my free time.

Do you happen to have the settings you used to create your fire effect?

Downloaded latest bin file which appears to be much smaller than any thing I have seen the videos and posted images. Flashed with no problem but wifi never shows up. Tired using 12v and still nothing.

Do you happen to have the settings you used to create your fire effect?

@nickelk13386 Make sure you have the firmware in the github repository. I rolled it back a few days ago because of a bug. I tested and uploaded it again tonight just to make sure.

If it still isn’t showing up, do a factory reset:

NEW FIRMWARE - I have been playing with methods of doing factory reset on this device. The new firmware has two methods of accomplishing this. Since the device doesn’t have any buttons by default, I wanted to create a way for everyone to be able to do a factory reset. This method might be easier to do with a surge strip with a button attached. Unplug controller and plug back in. Within 2 - 5 seconds after plugging in, unplug and plug back in. Repeat this process 4 times. You can know you are doing it correctly because on the second plug in the LED Strip will light up GREEN, the third it will light up BLUE, and the fourth it will light up RED. After it turns RED, you can just leave it alone. The little red led will blink 5 times slowly and then the RED LED strip will start to flash as th…

Finally got the bin to download correctly, flashed and works.

I have a REAL dumb question, and i apologize. But where do i get that blue jumper cable, or just a jumper cable in general? I have everything else in my cart for amazon to try this and the 2 Wifi Adapters coming tomorrow…Just trying to make sure i have everything to attempt this.

The one @dalec shows in his pictures? That’s just to short the two pins for J3, you can even just use a small piece of bare wire for that. I like old CD-ROM audio cables, but any spare cable/wire you can find laying around should work, just make sure you don’t short anything out. I’m sure you can get pre-made cables of that type on Amazon as well.

Yes I didn’t know if I could just get that exact one since it seemed to work real well for him. I don’t have any old wires around but I’m sure I can pick one up from somewhere maybe? Figured I’d try and tackle the project this weekend. Any idea what it might be called?

I think I had one in my post, anything like this, male to male is what you want: 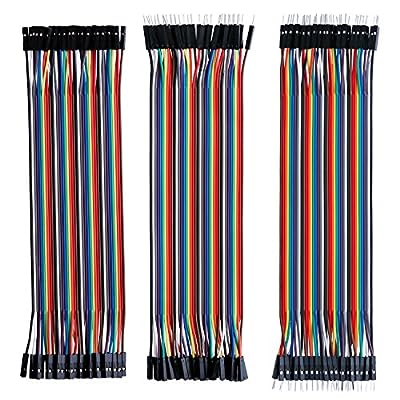 We have the manufacture factory, making productions and selling by ourselves. So we can control the quality of our productions by ourselves for you. We’d like to receive your valuable suggestions for ...

Oh OK good I ordered pretty much everything you listed. Except I went with a different strip of led lights. Do I just take one of these a d use it for the jumper?
I’m looking to get it set up for kitchen cabinet lighting so I went with rgbww setup. I have been reading everything you wrote so hopefully I can get this going. Thanks for all the answer back.

Yeah just peel one of these off. Make sure you take it slow, one step at a time, shouldn’t be too rough, let me know if anything comes up though!

Will do!! Thank you very much!

Hello. I am new to SmartThings and have been eyeing this thread even before I got my hub as I’m really interested in this. The only question that I have is how much current can this device support? My plan is to run about 10 M of LEDs (2 separate 5 M runs for top and bottom of cabinets) which would be about 12A of current draw.

Additionally, I have seen reports that the LEDs at the end of the run will be dimmer than the ones up front. Does it make sense to split the runs into 4 or 5 through a terminal block or something?