I use the Visonic and it’s working fine so far. Pairs instantly with ST. Battery life isn’t great, but that may be a function of being in the cold garage.

Add the newly created Garage door switches to the alexa smartapp in Smarthings, if you have not done so already.

I went ahead and got one anyway as it was cheap enough to take a chance on. I also got an ST multifunction sensor since it was on sale for $20 in case this one doesnt work out. If it does, then I can find another place for the ST sensor.

My MyQ lite stopped working today. I’m new to smartthings but had this set up and everything was fine until today. I tried to go through setup again but it says there’s an error saving unnamed page… I’ve tried to remove the myq lite app to set it all up again but it says “an unexpected error occurs” when I try to do it on the ST app… I tried deleting it from the ST IDE but it says “this smartapp cannot be removed at this time because it is installed by one or more users”… Any advice would be appreciated!

Have you installed/updated to the latest version of the MyQ smartapp?

It finally let me delete everything and I was able to start over and everything is working fine now. Not sure what the issue was

Noob question here, how do you utilize the door sensor for garage door? I was looking at my garage door and find it difficult to put the magnets on the door rail since wheels are going through the rail.

Noob question here, how do you utilize the door sensor for garage door? I was looking at my garage door and find it difficult to put the magnets on the door rail since wheels are going through the rail.

Is this an ST Multisensor? If it is, then modify the device in Things to act as a Garage Door and then it will act as a Tilt Sensor and you don’t need the magnet. You just mount the Sensor to the front of the garage toward the very top. Problem solved.

Thank you! My multisensor is not here yet, just wondering if I get the Visonic door sensor like @wildrover did how to put on the garage door?

Thank you! My multisensor is not here yet, just wondering if I get the Visonic door sensor like you did how to put on the garage door?

I will let wildrover answer that question for you. There was another thread for this device as a garage door opener so hopefully you don’t experience that:

Does anyone use following sensor for Garage door open/close? If yes then are you using a modified DTH? Visonic MCT-340 E Wireless Door Window and Temperature Sensor 2.4ghz ZigBee I had a ST Multi sensor which recently died so trying to find a replacement which can notify me when garage is opened/closed.

Seriously, spend $10 more and get the tilt sensor over the visonic 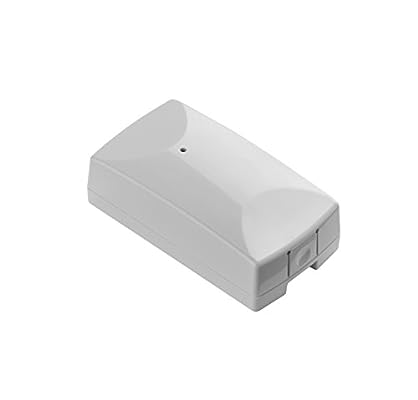 From the leaders in zwave plus technology, the ecolink garage door tilt sensor allows you to improve the safety and security of your home and family easily and effectively. Built with premium componen ...

Yeah I think better to get a multisensor or tilt sensor, yet it’s so expensive here in Canada…

I put mine on the top. There is a gap of about an inch or so between the outside of the door and the wall, which is actually inside the garage. One thing I noticed is that putting the magnet on the metal door decreases the strength of the magnet, so I stuck the magnet to the wood wall and the sensor to the metal door.

Yeah I think better to get a multisensor or tilt sensor, yet it’s so expensive here in Canada

But you will get a better bang for your buck in my opinion.

Also being in your garage, chances are this is a lot further away from the hub than most devices. So make sure that you test to make sure that devices in the garage communicate all the way to the hub, or look at additional devices between your garage and hub to act as a repeater for a better and stronger mesh.

To save yourself a lot of headaches, you want to go with a device that can act as a tilt sensor (meaning you don’t have two parts to make it work), otherwise you are asking for more potential trouble with the garage door and railings being metal and then the magnet. Do without the extra headache. I originally was using my ST Multisensor on the garage door as an Open/Closed sensor (using the magnet) and I didn’t have any issues. I had it mounted on top of the garage door (on the ledge) and the magnet was mounted on the wall. The issue I had was when the wind blew hard, the garage door would push slightly in just enough to separate contact from magnet resulting in a false openings.

So what I ended up doing was simply going into the device and modifying it to act as a garage door. I then updated MyQ Lite and populated the Tilt Sensor with my ST Sensor. I then mounted just the contact sensor to the front of the garage door towards the very top (without the magnet). You want to place this as far up to the top (upper panel) because if you place it toward the bottom, the sensor will be vertical before the actual Garage door is Closed and register as Closed in ST and possibly start the loud beeping/chirping on the MyQ siren until the door fully closes. It’s a timing issue.

So I would recommend that you go with the Ecotilt or the ST Multisensor and make sure that you have a strong mesh built between garage and ST hub for better communication and reliability. That’s just my opinion based on the positive results I have experienced.

Thanks a lot for the info, this really helps! Just got a bad news from my friends visiting US this week, all multipurpose sensors are sold out in Bestbuy… Guess I just have to got with the tilt sensor then…

Yeah I heard people saying that too, though it’s cheaper but I don’t wanna take the risk if it’s not 100% reliable, go with the tilt sensor then…

Totally understand that. Mine seems to be working fine but it’s lost 25% battery in a few weeks, so I don’t know if another sensor would be better. It’s only been in the 40’s and 50’s (F) so not freezing, but this seems unusual.

Brian, installed your code to integrate my craftsman (Chamberlain) GD opener. This model uses the separate hub to work with the MyQ app which has been re-labelled to Craftsman. It works like a charm on Smartthings - thanks a lot. PS - do you know where can I get some relevant icons for the pushbuttons, such as an open/closed garage door?

do you know where can I get some relevant icons for the pushbuttons, such as an open/closed garage door?

That’s an interesting idea. I had not thought about modifying the push-button code to include garage icons instead of just straight-up push-button switches. I’ll see what I can find.