@zcorneli
Is there a way to use this in a different capacity, more like a multi button remote?

Think like an aeon minimote or isis Button or Iris FOB.
Obviously no hold, but press a button, and it is assigned as a trigger.
So rather than it being a keypad, it could be a 10 (numbers only) or 12 Button remote. It would be a very cheap multi button remote if this DTH can be adapted or a new one written for this purpose. Thoughts?

Thanks so much for the work! It’s amazing!

Everything works great except one thing I just discovered for the iris brand keypad.I am new to this so please bear with me

After I Arm Stay via SHM, I can see the LED status changed to Red, however, if I entered a wrong code to try to set it off on the keypad, it actually changed the LED status to Green again with a Hi-Lo (error) sound.The status in SHM never changed because it was a wrong code, and the keypad and SHM is not in sync.

Sorry if this is something we already know, I kinda search this topic but was unable to find a related solution.

I know this question has been asked a million times but what is the best solution to integrate with SHM (Smart Home Monitor). I want the a exit delay for 45 seconds after enabling the system for the on (Armed (Away)) mode. Any tips??

My first attempt to integrate my new Iris Keypad failed. I loaded and published the DTH and the ULM app, and from all indications, the keypad was at least sending temperature status to the ST Hub. I make this assumption because the keypad device status looked similar to what other “things” display when I selected MyHome->Things->Keypad. Unfortunately, its other status indications, e.g. Motion, never varied. The Live log showed a few exchanges with the keypad but I never saw any indication that pressing keys on the keypad yielded any kind of communication to the hub/app. I have removed the device, and before I attempt to re-pair again, I have some basic questions: How is the keypad ‘supposed’ to work? It has Off, Panic, Partial, On, # and * buttons in addition to the numbers. What do the other button do? What SHOULD they do? A security keypad I’m familiar with uses 4-digit PINs to ID the person, and then subsequent numeral entries to direct the action to occur, e.g. arm or disarm being the two most common actions. What is supposed to happen when the PIN is entered on an Iris keypad since there is no obvious Arm or Disarm button? Is there an “enter” function, or is the PIN sent immediately upon entry of the 4th digit? How do you direct it to arm vs. disarm SHM? I seem to have been able to get some part of the keypad “trees” working – at least the device appeared in the Things list and was selectable in ULM configuration – but I need a big picture “forest” overview to understand how others are using this keypad. What are the main actions and responses that are available for this keypad using this DTH and ULM? [Note that I did not install SmartAlarm, which appears to offer some additional features, but I did not believe it was essential to getting an initial keypad capability established.] Since I write software for a living, I hope to be able to contribute to the community in the future. For now, I’m just trying to get familiar with ST and setup a basic capability so that designated visitors can arm/disarm our home when we are away.

This is my setup…basically I want to use my Iris Keypad to wait 45 seconds before running Goodbye and arming SHM.

I created a new routine called “Goodbye -D” and a virtual switch with the same name. When the routine “Goodbye- D” is trigged using the keypad, it turns on the virtual switch. 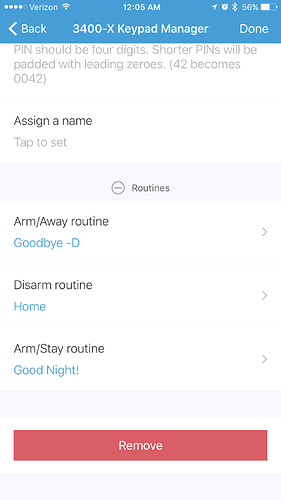 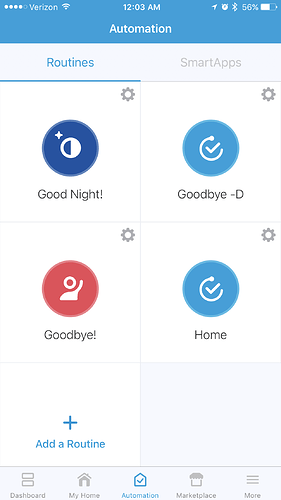 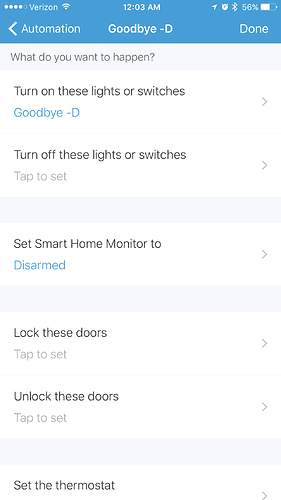 Core should do the test and run the routine Good bye. 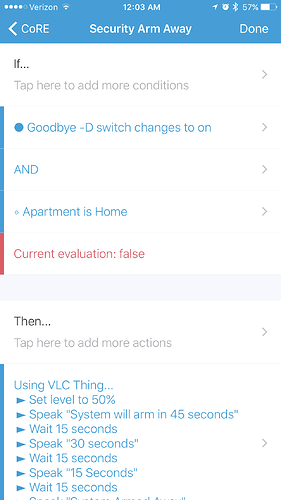 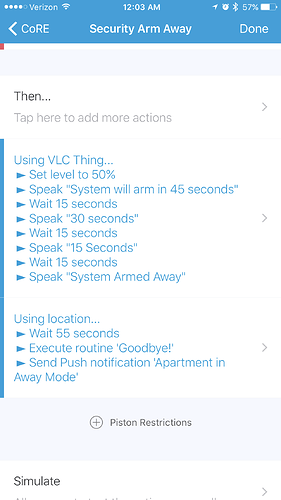 MY PROBLEM - Unfortunately SHM monitor is arming immediately, NOT after 45/55 seconds. How can I resolve this??? Any better solution to tackle this problem??

Have you looked into Lock Manager? I know in the old User Lock Manager, a delay was built in. I would think this feature is still in the new and improved Lock Manager.

Should I use this as an alternative smartapp or device handler? And which child smartapps should I use? Thanks!!

Lock Manager would be an alternative smartapp. To use the keypad, you would
need the parent app and the user and keypad child apps.

Is it possible to also use my speakers to say exit in 45 seconds, 30 seconds, etc… using core or something. As I did previously??

My battery died after 12 days of use, do I have something setup wrong? Or is it possible my new unit just came with bad batteries? SmartThings app still says 100% but the unit is dead

Had the same Issue here. My batteries died after 22 days of use. Seems very sub par. I am hoping they are that the batteries it came with just aren’t that good. I ordered some rechargeable batteries last week that should come today and I am hoping that these will last longer. And if not I can at least swap them out really quick and toss in the backup pair that is charged and keep switching them out that way. Which isn’t ideal but at least that way there wont be any downtime.

The battery issues are due to a firmware bug in the keypads, where the LEDs don’t shut off after the delay like they’re supposed to. The keypads go from pretty fully (reporting 100% or more) to completely dead in a matter of a couple of hours, so they don’t report their “real” battery status when they die. I was tending to get about 1-2 months from my batteries before I hit the bug, but it seems like it could happen anytime

The only way to get a firmware update so far is to connect the keypads to an Iris system, which will update the firmware automatically. I haven’t found a way yet to get the new FW from a keypad, or get ST to accept a firmware update to give to the device.

I eventually just purchased a $20 used Iris hub v2 from ebay in order to do the firmware update. Not the best solution, but it seems like it might be the best solution we’ve got at the moment.

Thanks for the info! Before mine died it started reporting false temp. info. (5, 19, etc… degrees). The lights on mine don’t stay on but I do have an IR camera pointed at the keypad and their is a blink every second (stopped after batteries died). I received this from lowes.com recently so I assumed it would have the latest firmware. This keypad is at my 2nd home, the one at my house last 7 months on batteries and I got it over a year ago.

I hope the new batteries last for much longer. Also @mightythias let us know how the rechargeable batteries work out for you, I was looking into those yesterday but couldn’t find any with good reviews.

The IR blink is “normal”, it’s how it does the motion detection.

The lights only need to stay on once for the batteries to die. It happens quite quickly if they get stuck.

I would have assumed the same on getting one with new firmware getting it straight from Lowes, but the one I got as a replacement about a month ago (For one that triggered this light issue repeatedly) also had the bad firmware on it. Seems they’re just relying on Iris to update them, instead of producing them with the update on them already.

Does the Iris hub have to be a second generation hub? Most of the cheaper models on eBay are the first generation.

It does need to be the v2, the v1 hub won’t work with this keypad.

My Iris logo sometimes stays lit. Any solution to remedy this problem??

The short term fix when you notice it is to wave your hand in front of it again.

The only long term fix right now is to use an Iris hub v2 to update the firmware on the keypad.

I would be willing to mail mine (to anyone on the forum) along with a fee to update mine with an Iris hub. (:

Alternatively, what are your thoughts on using an external power supply like this: POWER SUPPLY

I have a light switch under the keypad, I assume they keypad just need 3V? So would this option work?

I just ordered one to update my two keypads. Shoot me a PM and I’ll update yours when I do my two.