I definitely REMOVED the original (older version) thanks…

will play with the new a little more - stay tuned.

I see u mention about placing a blank user in a slot to erase… Is this a work around? Because I was having a huge issue where if I deleted the user the code still remained no matter what I did…

And u asked me in my other thread if my app was reporting if I unlocked the door… It is inconsistent. Yesterday I couldnt get a lock to set at all… I had to manually set a lock with the the lock itself.

What’s the best DH to use? I have the Schlage Connect touchscreen.

See messages in the start of this thread. This was a design decision made for various reasons, but the app does not delete code slots in which it does not manage “deleted” users. The app user (you) has to be conscious of codes left in slots when ‘deleting’ users. At least for now.

This is also the behavior for the old app for various reasons. Here's my thinking: My idea is that there will be a STRONG mode (default) that will manage all the codes. This means that it will strong-arm all the slots that arent set by the app into a deleted state. STRONG mode will be able to be toggled OFF so that you can let other apps manage slots that aren't being managed by Lock Manager. I have a feeling most people will just choose STRONG mode, but if someone toggles strong mode OFF and then removes a user, it will not delete that code. If STRONG mode is on, the code will be deleted. Thanks for the input!

First I wanted to say fantastic job with the application. I like the idea of switching to managing user profiles and the way it is handling the codes.

Do you have the ability to poll the lock for a breakdown of what code is in what slot like the legacy app?

Really impressed so far. Good luck and thanks again for the help.

It will have that feature in the future for sure.

If any of you are using my ZigBee Universal Lock with Lock codes, please update to the latest version “0.5a” as it fixes an issue with sometimes not reporting user used codes back to the smartapp.

** Version 1.6a Released. Added fingerprint for Yale YRD226 and YRD246 locks. ** If you are using a version prior to 0.7a, after upgrade, you must remove and re-add your lock to SmartThings. For fresh installs and all others, hit force reconfigure in the mobile app once after installation. Added Features: Setting/Deleting/Updating Lock User Codes as well as reporting their use to lock manager SmartApps. Enhanced lock action status: jammed lock, used code information, manual/remote notification. Yale Locks Only: Volume, AutoLock, Privacy Mode, Wrong Code Entry Limit, Invalid Code Entry Lockout Time, and One Touch Locking are all configurable. This DTH has fully implemented the following commands: command "resetTamperAlert" command "setCode" command "deleteCode" command “reque…

@jhamstead @ethayer Thank you jhamstead for your awesome zigbee device driver. I have waited for nearly a year to be able to fully use my Yale YRD240.
Thank you ethayer for your awesome app. The beta version works great with only a minor bug mentioned earlier in this thread when initially selecting the slot for a new user…you must do this twice.
Wahoo…now I really have a smart door lock!

I downloaded and installing my first lock today, which is a Schlage. Do I still need the DHT for that lock brand like the old app required? If so, I can go into that thread to get that DHT correct?

Yes. You’ll need the lock DTH, as you cannot do any of the code operations on your lock without it. The default DTH does not have that ability.

It would help if I could see your live logs. I don’t think support would be able to help as this is a user developed app. Unfortunately, I’m not the developer of this app and can only offer so much support. @ethayer may be better able to help. In any case I would recommend moving your questions to the new thread I linked below

I installed the new beta smartapp (installed both the parent and child) and left gary’s DTH that I had for the old smartapp since I have a schlage connect. Went in to ‘market place’ --> ‘smartapps’ --> ‘my smartapps’. 2 “lock manager” smartapps are listed, both with the same name. I open each and assign my front door lock and get the green light that they are installed and automating. I then go back to automation and click ‘new user’ but only get the thinking graphic for a second, then it goes away and nothing else happens. The ‘right now’ screen shows the added buttons for alarm on/off and volume, auto lock, lock and leave.

Did I miss a step somewhere? I cant add users, or see any other options like scheduling.

What are the live logs you need to see? Screenshot of the events list under ‘live logging’ in the IDE, or the ‘list events’ in the device details?

You should only add your lock to the lock manager app not lock user. Delete anything you’ve added there.

Live logging and the output of the lock and smartapp when you get the timeout.

Operator error… both smartapps were titled ‘lock manager’. Somehow I added this smartapp twice in IDE instead of the ‘lock user’. Got it working now. Really appreciate all of the quick and helpful responses.

Taking some time off of work next week, going to work on this application a bit!

Anything else I’m missing feature-wise from the old app? I’m not planning on support for a key-pad only device as I don’t have one, so I’m not able to test. Sorry!

I think the above list will get the app out of “BETA” as the features will be robust enough to replace the old app. At that time, I will remove the old code as to keep new users out of that path.

I’m not sure if ever that this app will be a market-place app. Right now, it requires a custom hook on the device type that SmartThings doesn’t seem to want to implement in their default app. If they don’t put it in the default DTH, then marketplace users will be sorely disappointed in the functionality. I’ve asked for this to be added the the DTH a few times and it doesn’t seem to be possible at this time. I even offered a pull request, but it has gone apparently un-noticed.

I’ll also be spending some time seeing if I can’t remove that requirement. It may be easier to do given the planned functionality of ‘Easy Mode’

Speaking of old code, I had to use the old ‘zwave-lock-reporting.groovy’ from “User Lock Manager” since I got an error (“Updated 0 devices and created 0 new devices, 0 published (1 skipped due to errors)”) trying to check-out and publish the DTH from the Beta version in github. Doing a diff on the two DTHs revealed very minor changes (color changes and I think an additional debug statement for the log).

Except for trying to get the new ‘zwave-lock-reporting.groovy’, the Beta is working fine for me.

Yeah I took the most recent DTH from ST and then inserted the hook. I didn’t test it well enough apparently.

All my battery levels for locks report 1% levels even though the IDE shows actual levels… 80 - 40% in most cases. I’m guessing the fix is somewhere in the default DTH.

I’ll work on this also.

I didn’t read the whole thread here, but would it be possible to update the OP on what the explicit goal features are for this implementation? I find the statement about “It will lack features of User Lock Manager” a little hard to understand. Maybe even just stating which features aren’t or won’t be available from that project would help. I find the previous implementation usable, just has some minor concerns which cause me more work.

Support and documentation takes time. Time I’d rather use just adding the features in.

Right now the app can…

For those using ZigBee locks, I have released a newer version of my Universal Enhanced Zigbee Lock with Lock Codes. Upgrade at your soonest convenience. Added Privacy Mode and a better tile layout for Kwikset locks.

** Version 1.6a Released. Added fingerprint for Yale YRD226 and YRD246 locks. ** If you are using a version prior to 0.7a, after upgrade, you must remove and re-add your lock to SmartThings. For fresh installs and all others, hit force reconfigure in the mobile app once after installation. Added Features: Setting/Deleting/Updating Lock User Codes as well as reporting their use to lock manager SmartApps. Enhanced lock action status: jammed lock, used code information, manual/remote notification. Yale Locks Only: Volume, AutoLock, Privacy Mode, Wrong Code Entry Limit, Invalid Code Entry Lockout Time, and One Touch Locking are all configurable. This DTH has fully implemented the following commands: command "resetTamperAlert" command "setCode" command "deleteCode" command “reque…

FYI - I’m using version 4.1.5 of User Lock Manager, and I’m also seeing constant User Lock Manager entries in my Activity Feed and in my “Recently” tab of my Schlage Connect lock. Here’s what my Events List looks like: 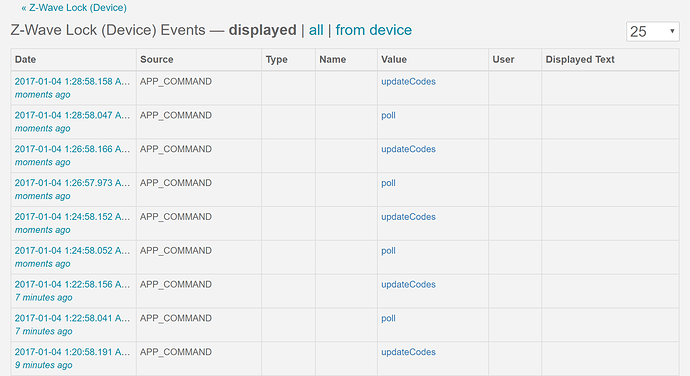 Is it a good idea to power up the lock in the family room and connect it to my system before installing? The installation location is through two walls and about 25 feet away. Figured I could insert batteries, connect the lead between the keypad and the other module, connect it to SmartThings, and then take it apart and complete the physical install tomorrow.

EDIT: Got my answer, going to install it on the door, then add to my system. Also adding a GE 12722 switch in the entry near the door so I have nearby beaming. Good excuse to add another switch that I wanted.