Hi -
I read the documentation but didn’t go through the whole thread - so may be this buried in one of the posts, can existing sensors on a ST hub be incorporated with Konnected? Same for other devices - like turning down thermostats when connected is armed etc?

Konnected basically just turns wired sensors into SmartThings sensors. You can then control all your sensors wired and wireless within the SmartThings app. It turns dumb things smart

Thanks - so the app doesn’t do actual home security system type functions, like take actions based on rules, and that is something that has to be done separately using other automation apps?

Their video made it seem like it was a home security replacement.

If any ST devs here are interested in helping on this, I’m open to a contract engagement to get it moving quicker.

What are the drawbacks to this currently available, tested, and rapidly evolving Community solution?

While it may be getting a little cluttered, I suppose it could be slimmed down to the most important use cases, right?

Version 2.0 now available Please try out the easier to use Version2. Purpose This smartapp simulates the Entry and Exit Delay parameters currently missing in Smart Home Monitor (SHM), allowing for some time on entry to disarm the system, and time to exit the facility without triggering an alarm. Entry and Exit delays operate on contact sensors selected in Delay Profiles. SHM is generally fully armed while using this smartapp, tripping a ‘non-delayed sensor’ immediately triggers a SHM intrusion alert. This means a motion sensor that ‘sees’ a door with a delayed sensor, or ‘sees’ a arming/disarming device such as a keypad, may trigger an intrusion alert while you are arming/disarming the system. Motion sensor issues may be mitigated by specifying the motion sensors in the Delay Profile. A…

thanks appreciate that - I have been using ST mostly for controls, just getting into the sensing and security side of things

I think the main drawback of @arnb’s delay solution is the need for simulated sensors for each sensor that you want on delay. I think that’s fine for most of us here who understand how ST works, but gets really confusing for other household members who aren’t automation geeks.

I agree. The end goal needs to be a solution that makes this easy and seamless for an average user. My entire home is basically in “Beta” mode right now because I can’t go 100% online if it doesn’t work 100% of the time. My wife would not be happy if she opened the door and was greeted with a high db siren because her location did not catch up with her soon enough.

My kids are the same as 2 of them don’t have phones yet. They do not have any geolocation and I think the best option for them is to incorporate a delay so they can reach the ActionTiles panel to disarm.

I think the best option for them is to incorporate a delay so they can reach the ActionTiles panel to disarm.

We agree that using ActionTiles to perform the “traditional” arm/disarm function is appropriate for many households, including perhaps alerting which Contacts are still open when attempting to Arm, etc…

ActionTiles can implement the “Arm delay prior to Exit” (for all SHM Sensors), and maybe integrate related functionality with Konnected; so the discussion and brainstorming on this is valuable.

Yes, more brains! Leaving the house is the easy part. Multiple people with different entry methods is where it gets tricky.

My wife likes the old alarm company panels and she was a little hesitant when she saw me take them out and replace them with tablets running ActionTiles. She also thought I was out of my mind when I ripped out the old security board and replaced it with the tiny Konnected board.
Now she is greeted in the AM with the forcast and schedule when she cranks up the coffee and every few days she walks up to the always-on wall mounted tablet, with our family photo as the “screen saver”, to check the 7-day forcast.

She enjoys it now because she doesn’t have to think about it at all.

The entry delay is all that I am missing to go from Beta House to Alpha House.

I am trying different things using webcore to accomplish the delay but in the end it will only benefit the few that work on that level. The hard part is making it easy for my in-laws.

I am trying different things using webcore to accomplish the delay…

If you are “WebCoRE capable”, then installing and using @arnb’s solution shouldn’t be a problem, right?

Kind of agree with @Apexdestroyer13 sometimes trying to be smart can end up in activating high decibel sirens at wrong times. The old alarm panel is something familiar. Doing the same with smart tiles is probably ok. Then there is the vagaries of the cloud and ST downtime to deal with. You can live with those for turning things on/off and notifications but activating alarms is another thing.

I am new to this conversation but @heythisisnate have you guys thought of a Konnected keypad/API the SmatTiles calls that is not tied to ST but connects to Konnected - it can do a couple of things - introduce delay immediately after hitting the first key by delaying sending events to ST, after that let the user enter a code and disarm ST. Keep the sensor data queued and push it to ST after a delay. Alternatively you can listen to another ST device real or virtual and if that changes state, delay the sending events to ST. Doing it in ESP code on an event should be a lot simpler than round trip from ST hub. And it solves your making it an appliance goal.

I am new to this conversation but @heythisisnate have you guys thought of a Konnected keypad/API the SmatTiles calls that is not tied to ST but connects to Konnected - it can do a couple of things - introduce delay immediately after hitting the first key by delaying sending events to ST, after that let the user enter a code and disarm ST. Keep the sensor data queued and push it to ST after a delay. Alternatively you can listen to another ST device real or virtual and if that changes state, delay the sending events to ST. Doing it in ESP code on an event should be a lot simpler than round trip from ST hub.

I can’t speak for @heythisisnate; but I can say that we at ActionTiles is interested in helping achieve this - when the time is right. We love Konnected and I personally believe that “traditional” alarm control panels (in the form of ActionTiles!) still have a place in many families smart homes; either as an alternative to presence sensing and/or smart lock codes … or as a secondary backup mechanism. I totally agree that avoiding false alarms is critical: We all know the “cry wolf” story.

But ActionTiles is still a rather new company and product; and Nate is obviously focusing in meeting the commitments made to his generous Kickstarter backers.

After that: The future is bright!

Let’s all be both optimistic … and patient, and enjoy the creative ways this might be implemented… Thanks! :

BTW: SmartThings has commented that they are indeed working on new code for SHM; but (1) It wasn’t and shouldn’t be an official announcement; and (2) There’s no time-frame and there’s no guarantee that it will fulfil the desired requirements or not come with new issues. So whatever “we” implement could be an interim bandage and no longer needed - or it could be something that requires substantial evolution as SmartThings (etc.) also evolve.

MVP and iterate is the name of the game and the best way to win. TBH you guys should think merger, both together and expanding Konnected from alarm to ST_Anything like things. plus Konnected ActionTiles has a ring to it.

Best of luck to both of you.

I am a supporter of both Konnected and ActionTiles and I appreciate your dedication to your work and to your customers.

I have followed all the steps to load the firmware and lus files to nodeMCU and connected the device to WiFi.
I Used the GitHub integration and updated the SmartApp and Device Handlers from repo.
I powered up the device and can see it on my WiFi. when I am trying to add Konnected in SmartApps on mobile device then at first screen itself it is giving error “Sorry, but there was an unexpected error”, SS is attached.
Please help me if anyone else also had same similar issue.
Thanks. 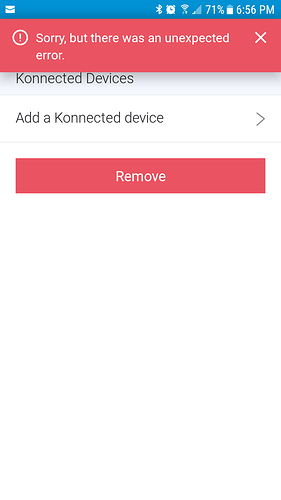 Check the Live Logging tab for the actual error message. Likely something is missing from your SmartApp setup. See this video for a complete setup walkthrough:

I use Konnected to control lights with my motion sensor without an issue!