So, got an interesting thing on this Smart plug.

I bought one to basically act as a repeater to control landscape lights in my backyard. The GE Outdoor outlet would not connect to my Hub (too far away I guess). I followed all the advice above, and got the smart plug to install, and work (I had it controlling a light just because I had it). I also then “installed” the Zwave portion of this smart plug, to act as a repeater.

Try as I might, I could not get the GE Outlet to connect to the hub.

So, I just installed an Aeon ZWave repeater RIGHT NEXT to the Smart plug. The GE Outlet connected right away, and works without any issues.

So, my question/comment is: How do we know the Smart Plug is “working” as a repeater? From my simple experiment, it sure does not seem to be nearly as effective of a repeater as a dedicated ZWave repeater.

Maybe the Zwave portion of the plug is not installed properly, but all appears fine? From everything I’ve read, there is no way to “TEST” the Zwave signal without some sophisticated/expensive testing equipment.

Just an FYI for anyone looking for a repeater for their ZWave network.

Very interesting. I don’t have any gaps in my mesh in order to test if the repeater is working or not. The plug has z-wave plus in it so it shouldn’t be a range issue. Maybe @slagle or @jody.albritton could see if there is any way of ensure the repeater is actually working?

Does anyone know if this shows the power usage in watts like the smarthings outlet?

It does show the power usage in watts. I wish it was aggregating it over time and showing it as energy used for x hours and an option to reset these 2 values.

It does show the power usage in watts. I wish it was aggregating it over time and showing it as energy used for x hours and an option to reset these 2 values.

Ye… thats the idea. Basically it will work as a Killa-Watt. I’m sure some smart people here can write up some type of app for that?

Is that even possible? @smartthings can a SmarThings SmartApp do calculations?

You can always log the power usage using this smartapp:

Then you can graph it or figure out total energy usage.

Thanks. I will try that, but considering how unreliable the time scheduled events are, I thing it would be much nicer if it was integrated into the device handler code.
I know it is possible. I got the idea by looking michpond’s code for the Quirky Outlink smart plug. The Outlink does not support the moment power value, only supplies energy usage. So Mitch is calculating and displaying the power value using the energy and the time between events. I tried to do something similar for the Iris Smart Plug but I don’t know enough Groovy and got frustrated with it and abandoned it for now.

If we have it displaying energy used for certain time, we could then use this google logging smart app to put the values in a spreadsheet and maybe reset the usage statistics on the device (that one would probably require a custom smartapp).

The logging smartapp isn’t scheduled, it listens for the device itself to push a value which it does at automatic intervals. If you changed the devicetype it would no longer work locally.

OK, that is great. I will definitely try this.

Why would I care if the device runs locally. As far as I know that only matters for lights because only the SmartLighting app is capable of running locally. So even if the smart plug is running locally, I won’t have an app that could use it locally. And if I have a smart plug that is capable of measuring power and energy usage I wouldn’t waste it on controlling lights with it.

You can use the SmartLighting app to do most basic automations for the plug such as having it activate based on motion/contact sensors, specific time of day or even based on sunset/sunrise.

Ben, I think I managed to make it display the energy the way I wanted. I’m new to this and I don’t know if I am doing it right, but I think by creating a pull request I am sending the changes to you for review and if you approve them you can include them in the code. Is that right?

Is the code working properly for you? Can you share a screenshot? (I’m using the default SmartPower devicetype for local control) 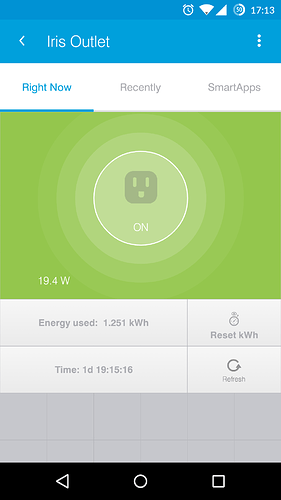 That’s awesome do you think that can work with the SmartThings outlet as well?

I don’t know what device type is used for it, but if it is the SmartPower Outlet - yes.

I’ve merged your pull request on Git. It should be live now. Thanks for the work. I personally won’t use it as it won’t allow local execution but I know this is a feature that some have been looking for.

I just updated to the new handler…the images for refresh and reset are squished on iOS, and the tiles don’t seem to update with any data. FYI

I personally won’t use it as it won’t allow local execution but I know this is a feature that some have been looking for.

What exactly would be the diffrance. How is running local better? Just in terms of speed?

For instance by hub acces has been down for me, since the last outage a few days ago, support is useless. Local or not I can’t access anything.

Local support only deals with automation. During your outage if you had it set up locally using Smart Lighting for automations it would still follow a schedule and be able to be triggered using other locally running devices (motion detectors, open/close sensors, etc).