Hello I have two of these set up in my home and really like them. I don’t miss the programming since I can control them with my phone remotely. The only issue I have is adjusting the temperature is very cumbersome. It’s a slide circle that you move left and right and its really tough to get it to the temp I want…especially with my fat fingers. I am using the ST IOS app. Are there any plans to add a keyboard so we can just type in the temp and hit enter? Does anyone else agree the slide mechanism is clunky? Thanks.

Yep, I am having the same issue.

What’s more is that once a let go of the slider, it takes a second or two for the temperature to clock in. So I can’t correct my input right away. Not sure if that has to do with the fact that I am running my CT100 off batteries, instead of the C wire.

No I am using the C wire (and using batteries for backup) and I’m having the same issue. The thermostats are terrific its just tough getting it to a specific number. Really surprised there is not something that can be done to make it easier to set a temp.

I have the same issue with my CT100’s. I think the issue is not directly related to the CT100… but to how the SmartThings iOS app was coded for the thermostat device.

As you move the slider left and right, it seems that the iOS app is sending commands to the CT100 thermostat after every single time the value of the slider changes.

I think a better design would be to:

That way in our example, with the new design, the SmartThings app would only send ONE command to the thermostat when the user stops at 65.

Is there anyway we can try this somehow?

Another suggestion would be to also add some control arrows on each side of the slider. That will make it easier for the user to make small, incremental changes to the temp. Here is a very rough mock up.

Love the control arrows. Would make it simple to go up or down by a few degrees. Well done!

Yes, something like this would be awesome. Also an update to the dimmer control would be helpful as well!

These suggestions would have to be made directly in the iOS app by SmartThings.

Is there anyone from SmartThings on here that we can share this with?

I forwarded this to Ryan from Smartthings support. He said he would forward to the design team. He also told me they are coming up with additional functionality around setting up some programming for this thermostat. Right now everything is manual.

This may be with a try. It didn’t work with my brand of thermostat, but it may work for you
http://build.smartthings.com/forums/topic/better-different-thermostat-device/

Marc - did you hear anything else from Ryan/Smartthings? I was so frustrated last night - literally took my 2 minutes to get the thermostat set to 68. I kept missing it - 66 – 67 – 70 – 69 – 65 – 69. I don’t have chunky thumbs (haha) so it shoul dnot have been that hard. The control design is flawed. I hope they offer some better control options.

Kevin - Thanks for that link. I tried to use that device type, but I couldn’t get it to work with my CT100. Has anyone else been successful?

Any update on improving the control UI for thermostats?

With my central air kicking up these days, it is increasingly frustrating with the current finicky IOS device UI.

Anyone figure a way around the current challenges?

@edgespresso, did you take a look at Twack’s “better different thermostat device” thread that Kevin mentioned above?

If you tried it way back when and it wasn’t what you needed, maybe take another look, it has evolved. I’m using that with a CT30 and it’s much better than using the sliders, at least for my Android devices.

BTW, @twack, if I didn’t mention it before…thanks for sharing your work on the thermostat device.

CT 100 works almost perfectly…it paired easily (no c wire), didn’t need a “programmable thermostat” since I set according to presence, modes, etc. little sluggish but so am I, now the but; same as above real frustrating to set temp. Have to think twice about making adjustments which kind of defeats the convenience factor. Any update on a resolution?

Any updates for programming with this Thermostat? I’d like to set up some hourly changes that were previously capable with my last thermostat. Is there someone at ST to reach out to?

I am getting ready to make the jump into SmartThings and I currently have a CT-50 wifi but I have an old regular dumb thermostat for my upstairs. I would like to know if this issue you all are talking about has been fixed, if so I will ditch my CT-50 and get 2 of the CT-100. Thanks for the reply in advance.

What are you looking for? There have been a few improvements in other threads that dealt with the slider issue.

Thanks for posting! I followed RBOY’s steps and opted to leave the sliders in place instead of the up/down controls. I am able to display humidity and battery perfectly in the App for one of my ct100’s. Looks like it auto-sets the clock as well (looking at the activity log). On my other ct100, the clock auto-sets but… the humidity and battery tiles were each displaying a pair of hyphens ("–"). The only difference I can see between the two ct100’s are in the Device List. One shows Status as INACTIVE and the other shows as ACTIVE. The one showing Status as INACTIVE displays the pair of hyphens for battery and humidity. After closing the App and terminating it a couple times, the Humidity started to display correctly on the device that had appeared as INACTIVE. Checking the Device LIst, agai…

You have to tweak the device type, but it’s certainly doable. Here’s what mine looks like: 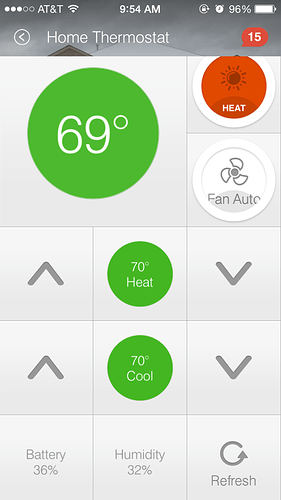