This past Christmas Santa gave me a Smartthings Hub and a few Aqara sensors. All of them seem to work great till now. I even have a Bluetooth speaker connected to a Raspberry PI 3 that tells me change in state of any of the sensors. A PI camera is coming soon. I have already tested on an old laptop that I run Ubuntu and a Playstation eye we already own.

I cannot thank enough the community of developers for their work in creating device handlers and putting out step by step documents. I do not think without these forums and the helpful contributors, I would have even considered buying hub. Thank you all.

So, here is my issue. I have a glass sliding door facing my backyard. I consider it the weakest point in my house when it comes to security. All I have right now is a motion sensing bulb attached to a regular light fixture. It works, but I do not consider it to be enough. All I really want is some kind of added notification on top of the lights coming on. I tried reading up as much as I could on outdoor sensors but there does not seem to be a good solution out there. I was looking on amazon for a better looking motion sensing light fixture, seems they work better than motion sensing bulbs.

Instead of a regular bulb, what if I connect a ZigBee or a Zwave bulb to it ? Will it be able to send me a notification to my smartphone that the light turned on ? Maybe there is already a thread on this and I missed it.

Appreciate all your help.

Ok I’ll try and be as gentle as I can. If your light fitting has a motion sensor, separate to the light, that trips the light when there’s motion, if you can expose the wires, I would stick a Fibaro 212 relay in there as a middle man, so you’ll get notified in SmartThings when it trips, and then trigger other stuff, also with the relay, you’ll be able to turn on the light with the Fibaro relay if you want, without there being any motion.

Depending on what options you have for sensor placement, you may have decent results using a Lowe’s Iris indoor motion sensor outdoors. I’ve been using Iris sensors outdoors for going on a coupe of years now and they have exceeded my expectations. After weeding out a couple of battery eating duds, I’ve seen acceptable 6 -10 month battery life in temps ranging from -13 in winter to high nineties during the summer. Try to place them under a sheltering eave with a bit of GE silicone to harden them somewhat from water intrusion, avoid (if you can) letting them see direct sunlight to minimize false alarms if you want them to alert you during daylight hours, and they will probably work fine.

Here’s what works for me: Zigbee smart bulb (Osram Lightify or Cree) in conventional switched fixture (take care to keep the indoor switch ‘on’ if there is a possibility of the fixture being manually turned off). You don’t want to put a smart bulb in a motion controlled socket like the Heath. As the entrances I want to protect are somewhat sheltered by an overhanging eave, I mounted the Lowe’s Iris motion detector (the ‘purple box’ variety that works with SmartThings) under the eave so that its field of vision includes the doors. I use one sensor that monitors two sliding doors on a deck about forty feet apart, mounted under an eave on the far side of one of the doors.

I have an automation that (depending on the time of day) will either sound a chime, turn on a light for a set interval or play an audio track of barking dogs if no one is home (see Core, or WebCore and Aeotec Doorbell). I also mounted a smart button nearby so I can override this behavior if need be.

A current sensing device of some kind wired into the light fixture, as @alwas suggests, is certainly an option, but if you want something simpler you can just put a separate battery operated light sensor outdoors near the light and if it is triggered during a specific range of hours you could then use that event to Act as the trigger for anything that smartthings can do.

The Aeotec Multisensor would be one option as its light sensor is spec’d To operate outdoors, although its motion sensor is not because of too many false alarms due to temperature changes. 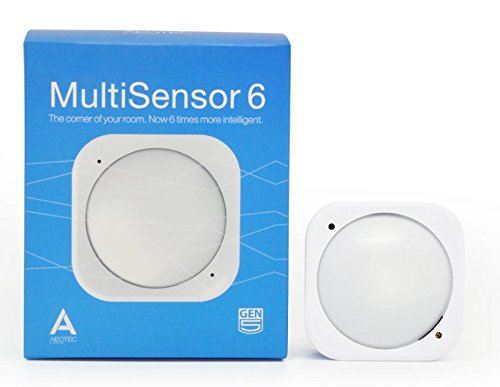 MultiSensor 6 is the foundation of a modern smart home. Its perfectly small exterior hosts the technology for real-time intelligence. Designed and calibrated to be as accurate as it can be, MultiSenso ...

There may be some other brands to consider as well, I’m just using this as an example because I know the case is hardened for outdoor use.

As far as putting a Smart bulb into the fixture, It might be possible, but All the brands are intended to always have power and then to draw for themselves the amount of current needed to change the brightness level. That means they don’t work well with devices where the switch or controlling fixture keeps changing the current level, which is how the motion sensor lights work. So first of all, you are likely to greatly shorten the life of what is already an expensive bulb. And second, it probably isn’t going to report the way you want. So I don’t think that idea is going to work in this particular case. There are definitely times when smart bulbs can work outdoors, just not usually in combination with a non-networked motion sensor light.

Edited to add @burd Posted while I was still composing mine. That would be another good option, and is an example of what I was mentioning about how smartbulbs can be used, just not with the particular fixture you are using now. So you are going to have a number of options, just depending on your own preferences.

I have several Smartthings Motion Sensors outside and as long as you keep them dry, (mine are mounted under the eaves of my house), they work perfectly. They have not failed me even down to 6 degrees farenheit. I also have Smartthings Multi-purpose Sensors inside my storm doors, (and naturally on all my entrance doors), and they also have not failed me.
I use them for various uses - to notify me of motion, fire my outdoor cameras to start recording and certain ones to turn on Smartthings outlets which in turn activate lamps. I also use them to monitor the temperature. If they get over/under the temperatures I have set. to send me a notification. I have Smartthings Multipurpose sensors attached to my outside cameras, (under the eaves of my house), to notify me if someone is tampering with the cameras.
So, I think with careful placement, you can use the Smartthings Motion Sensors and the Smartthings Multi-purpose Sensors.

The only concern I have about outdoor sensors is that they will be totally out in the elements without any cover. It will not get a whole lot of direct sun, it would not get cover from rain either. Eaves would be the only place it might get some shelter, mine are 40+ feet above ground in that part of the house.

I might just take a $30 chance and stick a sensor on the wall by the light fixture and use the fixture as partial shelter and see how it does.

Thank you guys for all your suggestions.

@rumrunner424
Be creative and look around for some sort of cover you can use. I used a $2 plastic electrical junction box, drilled out a hole big enough to point one of my cameras through it and put the camera inside.the box. Wasn’t pretty, but it worked. I mainly made the modification to the box to make it more difficult for thieves to take it down. To get the proper angle I mounted it using some cheap window shims and painted the box and shims to the color of my eaves. What I am saying is put a little thought behind it - and be creative.

I put one of the Bosch motion sensors outside to trigger a light and it works great so far. Was only $12 on sale, currently $15. People have complained about the 3 minute reset between motion triggers, however if your only using it to turn a light on for say 5 minutes like mine is doing them 3 minute reset doesn’t matter. Also it now works without having to have a custom DH so it will run locally. You need the custom DH to pair it but after pairing go into the IDE and change it to a “SmartSense Motion Sensor” and now it will run with Local Execution