Mine have been working great, however one day last week one of them which is supposed to be turned off by ST between 5-8pm (air purifier during peak electric rate time) was still running during that time. I didn’t investigate further and the following day it was working fine.

I just bought one of these Peanut switches. I have it set up as a Zigbee switch, but it seems a bit unreliable. I don’t see the option for the GE Zigbee switch in my device handlers. Does anyone have the code/GitHub for that handler? Thanks!

Unfortunately you need a Securifi router to update the firmware on them. Latest firmware made vast improvements to them freezing up & dropping off the network.

To whoever interested in using peanut plug in their smartthings system. I am posting a new peanut plug device handler here, which in additional to switch on/off function, it also displays power and energy usage. Here is the display in smartthings. 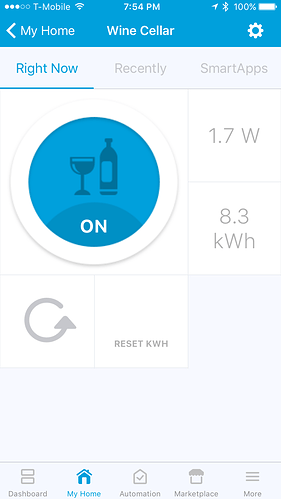 However, in order to display power and energy, latest firmware is required. As someone mentioned here, updating to latest firmware require Almond 2015, Almond+ or Almond 3 (Almond 2012 will not work because it does not support zigbee). You can still use the device handler if you are not updating the firmware, the power and energy will be zero. The energy display is the accumulation of the power * time, if you press the reset kwh button, it will start counting from zero again.

We neee an almond device we can ship around lol paying 80 bucks for a firmware update kind of stinks unless someone knows a place to get a cheap one?

Thanks. Yes, agree. Hopefully smartthings can do support firmware upgrade for devices other than light bulb in the future.

One thing I noticed with your DH is that in the recent activity if I turn it on or off I see the message in their twice.

Is this expected or on purpose?

I do not seem to have this problem. Is it happening on all your switches? Here is my dump of the recently page. 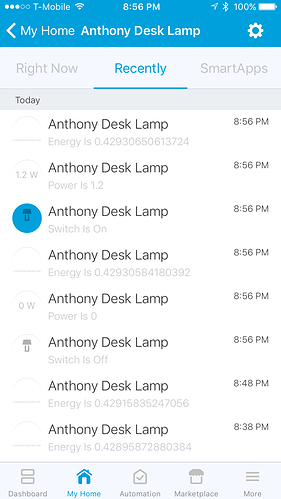 good question - I will have to put the DH back on a different outlet and test. Could be the older firmware I suppose on my devices?

Unfortunately, I upgraded all my plugs to latest firmware. If I come across one without firmware upgrade later, i can give it a try.
Did you take a look at the IDE log for the device to see if it shows two lines for on and two lines for off too?
In my case, i only see one for each said

Hmm, I was hoping this handler would work with my Peanut plugs since I bought them not too long ago, but the firmware update must have been very recent. No big deal, they are still functioning very well.

I’m using the DTH “Zigbee Switch Power” with a Peanut that I just received - wanted to use a stock DTH to retain local processing.

pakmanwg your device handler works on/off flawlessly thank you. Couldn’t get the consumption but doesn’t matter for me. Thanks again.

I just got a peanut plug and I am unable to pair the device.

Could it be my old school hub? It does support Zigbee…

You can try the following, after pressing the pairing button for 10 seconds.

If you don’t see it flashing several times, try repeat pressing the pairing button for 10 seconds and unplug and plug again.

You should see the device found on the screen within ten seconds or so.

Great to hear that it is working for you. You need firmware upgrade to get the power data. Somehow they don’t update the firmware when they ship it. I got several new ones from Amazon, they are all old firmware.

To whoever interested in using peanut plug in their smartthings system. I am posting a new peanut plug device handler here, which in additional to switch on/off function, it also displays power and energy usage. Here is the display in smartthings.

Would you have the GitHub settings so I can add them to my update settings? Thanks.