The beta test has actually concluded. They are compiling the results. Hopefully they will release it to the community soon. Once they do, you will not need the OSRAM hub.

I use the default DTH but there are other options, including the one here:

Intended for the US HA version. May work with the European ZLL version, but not tested. Implements: Custom On/Off dim duration (in preferences) Custom dim duration for level change (in preferences) Custom duration for color transition (in preferences) Pulse (aka ZLL breathe) and blink (custom commands) Color loop/cycle UI enhancements Updated 6/6/17: set default color/level code by @ranga To set default initial (power-on) color/level: set your preferred color/level wait for a few seconds, then tap the Set Default tile wait 3-5 minutes for the process to complete (do NOT switch off or change any settings during this time) the main (on/off) tile will turn orange with “WAIT” status during this period; if it does not reset after 3-5 minutes, tap the refresh tile after that, you can try…

I am NOT on Beta Hub FW, I never signed up for it, but my Gardenspots ore receiving OTA FW updates.

I will say That if you are only on 01020205 that you definitely need to get them updated.

Checked for Update or Receiving Update?

My Osram are at a higher firmware than what you are showing. I used the OSRAM hub to update.

After the beta firmware was installed on my hub, my OSRAM lights updated to Version: 0x01020492

You have the latest firmware.

Did they roll it out and not tell us? @slagle

The updated version SmartThings hub firmware is 16.00012. If you have that version then you got the OSRAM firmware updates.

I have that version, but it’s NOT for EU Osram updates unfortunately. At least that’s what support have told me.

The updated version SmartThings hub firmware is 16.00012. If you have that version then you got the OSRAM firmware updates.

I’m in the US and do not have this version. I hope they push it out soon I would like to be able to update the firmware of my bulbs from within SmartThings.

I dunno but lately I am getting more then random turning on of osram products. Bulbs light strips and garden spots. At least two to three a day now.

Any word on that firmware update being rolled out to the masses @tpmanley? I believe that I could really benefit from a little more stability with my ZigBee bulbs.

@tpmanley, is there a time frame for the rollout for the firmware update for Osram devices? I am going to shutdown my Garden Spots until this is available. Can’t deal with the constant resets.

Mine are all up to date and I still have resets. Firmware will not help. It’s one bulb and now my light strip turns on about 6 times a day.

@joewom What is the firmware version on your OSRAM lights?

One of the theories is that it’s related to the small buffer size of the Osram bulbs. During heavier traffic, some speculated that this caused the bulb to turn on (this also caused reliability issues as messages were dropped). I know ST slowed the traffic down to minimize the problem. If this is correct, I wish the repeater function of the Osram bulbs could be turned off.

I’ll look but yesterday I connected it to the lightify hub and said it was up to date. 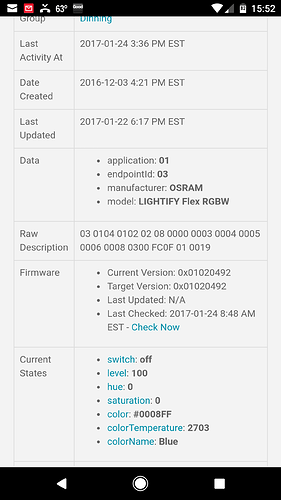 I can’t say when the OTA firmware will be released, but it is moving through the release process. In the meantime, if you are having any issues either with OSRAM (or GE Link bulbs for that matter) or you have OSRAM/GE Link and you’re having problems with other devices, this is what I recommend:

This will try to force any end devices to join through other routers or directly to your hub instead of through OSRAM/GE Links. In my testing this significantly improved the reliability of the OSRAM/GE Links and kept them from turning on unexpectedly. Note that if you don’t have any routers besides these bulbs then this method may not help.

Ill chime in. The updates to my osram bulbs was rock solid, before i was having random bulbs turning on and half the bulbs just would not work. After the up;date, no issues at all since.

Wonder why I have issues on two of the 6 devices. Going to call osram.