You’re not doing anything wrong. Xiaomi devices aren’t always so easy to pair.

Sometimes a catchall message seen in the Hub Events will be different from the one that can be used for the “catchall” method to add a Xioami device. However, in your case, the raw: message contains everything you need to add that device:

dni is the Device Network Id and ieee: is the device’s Zigbee Id.

So if you haven’t long-pressed the reset button since you saw those messages, you could try copying those hexadecimal strings to add a device manually: 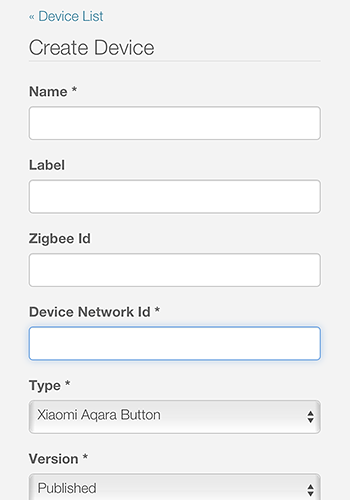 Otherwise, I would suggest trying to pair again. Sometimes it takes several attempts.

After I re-applied power within 5 minutes all of the sensors (including the motion) that stayed offline automatically started reading again. (no pressing the joining button)

Thanks a lot, Keith! That was an easy to follow explanation.

I had a better experience with aqara door and motion sensors. Paired them up within 5min of efforts.

I will try out the way you suggested.

Edit: Got 2 original switches working. To me, they are less reliable registering a press. I am comparing with the responsiveness of Aqara door sensors and Aqara motion sensors. Could anybody compare between Aqara and Original Switches? TIA.

Happy to report that after powering off all my Hue devices and the two ZigBee light switches at the time of pairing, the Xiaomi Aqara sensors have stayed connected far longer than they did before. I have one more I need to pair. Going to try just powering off the two light switches and seeing if that does the trick

I have around 20 xiaomi sensors and about 6 xiaomi outlets.
For me this has been working quite ok, but i still have the occasional dropoffs.
Dropoffs mostly occur with sensors on windows/doors that are not frequently used.

One thing i’m about 100% sure is that Orvibo products don’t play well with Xiaomi.
I have a few Orvibo (door) sensors, and these fall asleep when using the Xiaomi outlets. It takes one door-opening to wake them up. Basically you miss the door being opened.
I still have one Orvibo sensor in use, connected directly to the hub and works 100% fine.

As said, The Xiaomi sensors have been working fine with the Xiaomi outlets, but i still have one droppoff per month. Sometimes they reconnect automatically and i have installed a few more Xiaomi outlets to improve the mesh, which seems to work.
Although i don’t have many dropoffs i have replaced all the major doorsensors with z-wave.

yes, thanks will have a go at this soon.

Hi, just got myself some Xiaomi motion sensors and buttons and they work great, I was so surprised about the size of the motion sensors

Can I mount the motion sensors upside down?

I bought three Aqara contact sensors and succesfully paired them with my Samsung Connect Home, which supports hub functions.
I am using up to this date DH, pairing was easy, but all of my sensors are going offline after cca one hour after battery check. Before that it worked fine even showed battery 100%.
Do you have any idea how is this possible? I dont have any other zigbee devices. Paired them again and again and same results.

So far the only ST hub that has worked has been the Hub V2.

@ArstenA - can i suggest a quick and small edit on the motion sensor DTH? At the moment, the default time for motion to be reset is not set. So i think the motion resets pretty fast. For the Aqara sensor, the hardware stays blind for 120 seconds. Can that be put in as the default?

I recently switched to the new DTH and all my automations went wild. Once i has set the default to 120 seconds, everything was back to normal.

I think I’ve mounted a couple of them upside down and they seem to work fine. I just test them before I stick them to a surface.

I updated the aqara sensor, can you test it? Made the change from my phone, which is dangerous…

Cheers, il give it a go

Mine all come in at 60 seconds. Remember that when you first pair (or if you click the button) the motion sensors go into test mode for 2 hours - during which they reset every 5-6 seconds. After 2 hours they settle down to the regular 60 default.

For the Aqara sensor, the hardware stays blind for 120 seconds. Can that be put in as the default?

I have two Aqara Motion sensors, and like @AlecM, when in normal mode the hardware is blind for 60 seconds after detected motion, not 120 seconds. All other user reports I’ve read here on the ST forums and elsewhere online show the hardware reset normally happens at 60 seconds.

The default of the DTH preference to reset motion before @ArstenA just changed it was 60 seconds, same as the hardware. It even says that in the text of the preferences. The code is written so that if the preference is left blank, it will still use a reset time of 60 seconds.

Did you re-pair the Aqara Motion sensor when you switched to the new DTH? As @AlecM mentioned, when the sensor is paired or if you short-press the reset button, the sensor will start a “test mode” which lasts for about 2 hours. During the test mode, the sensor hardware is only blind to motion for about 5-6 seconds.

I think the problem relates to the fact that the DTH doesn’t ignore any motion detected messages from the sensor during the countdown to the 60 second reset (or whatever the user entered in preferences.)

We could change the DTH so that even if the sensor is in test mode, the frequent motion detected messages are ignored, until the DTH countdown is finished and it resets with the “inactive” event.

EDIT: I looked around again, and even in this (somewhat badly translated) Xiaomi device API document, it confirms the 1 minute hardware motion detection timeout:

@veeceoh I wouldn’t want to change the DTH to “ignore” the frequent motion sensed during the 2 hour test period, if I’m understanding what you’re suggesting. I find it very useful to use while figuring out where to best place and how to point the device (which is the whole point of test mode). If it were messing up an automation I’d temporarily take device out of it or disable automation until it settled down. (or cover the sensor or temporarily point it to wall - whichever is easier).

I wouldn’t want to change the DTH to “ignore” the frequent motion sensed during the 2 hour test period, if I’m understanding what you’re suggesting. I find it very useful to use while figuring out where to best place and how to point the device (which is the whole point of test mode). If it were messing up an automation I’d temporarily take device out of it or disable automation until it settled down.

Yes, I agree with that idea, but then the user could still set the “inactive” reset time to be shorter.

However, I realized my idea won’t work well, because it would prevent the “inactive” countdown from being extended by subsequent motion detected events.

I think the problem has to do with how automations are set up. If the automation is only looking for new motion “active” events, then during testing mode of course they will go crazy. If they are set up to only happen when changing from “inactive” to “active” then with the 60 second default in preferences, they would act normally even when the sensor is in testing mode.

The best happy medium I can think of is to add a second countdown timer which is 5 seconds shorter than the “inactive” reset counter. That second countdown timer period would then be used to ignore subsequent motion detected messages. Also, I now realize the default reset motion preference should be changed to 61 or 62 seconds to allow the first countdown timer to be extended if motion is detected exactly at the end of the hardware “blind” period.

Here’s what would happen in a couple of different scenarios:

This is the only way I can think of to avoid issues with automations being constantly triggered if a user short-presses the reset button or needs to re-pair the sensor for some reason.

Well checked the 45856GE and all the Xiaomi devices fell off. Definitely doesn’t work as a router/repeater.

Not sure why the Orvibo outlet works but will reconnect to it and see if there are any longer term drop offs.

@veeceeoh How about a solution (if possible) that would identify "You are in test mode for the next 2 hours…etc. etc… "- I think your suggestion, though well thought out, would be very difficult for the average end-user to understand - (I had to chart it out and I still have a hard time keeping on top of the details ) -