Once tested will your DTH be updated? I believe I am seeing the same issue.

Once tested will your DTH be updated? I believe I am seeing the same issue.

I just published the new version, but please confirm that it fixes your problem and doesn’t break anything.

I won’t be converting the Zooz RGBW Dimmer DTH into an Edge Driver, but most of the functionality should work with a built-in driver once the Groovy platform is retired

I contacted Zooz support and this is the response:

The ZEN31 does not have an official driver yet; in the meantime, one of the users created a custom driver that will take this device local.
It can be accessed through this link: SmartThings. Add a little smartness to your things.

You’ll then need to install the “Z-Wave Bulb Mc” driver from the list, delete the current groovy handlers if you have them installed still, and re-include the ZEN31 to your system.

I don’t know why, but I am totally shocked that community programmers are having to “save” people like me. I’m even more shocked that a request for company support referred me to a community programmer. They owe you @Mariano_Colmenarejo! Thank you VERY much! It’s working for all my automation and control needs with the exception of Alexa. Alexa only sees this as a dimmable light with no RGB control.

Why are they going to pay their developer to make the driver if it’s already made for free?

@Mariano_Colmenarejo Quick question if you don’t mind… The control works great within the smartthings app. But is there something special about it or am I missing something for sharptools? There are a lot of configurable items in the settings and I’m not sure what they are. I get “error sending command” when I try to use the color picker in sharp tools. 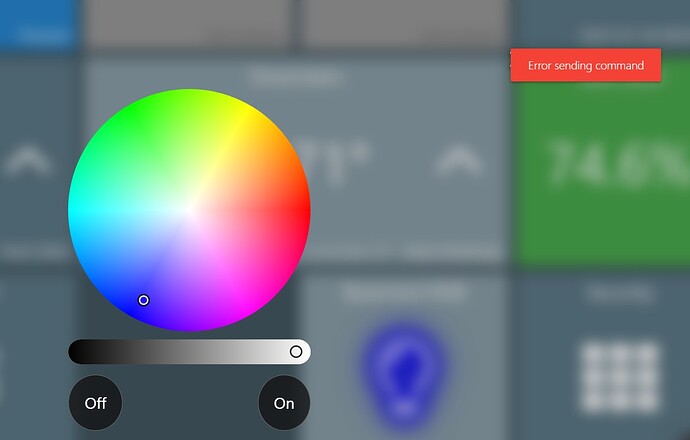 The control works great within the smartthings app. But is there something special about it or am I missing something for sharptools?

I don’t know if SharpTools can control secondary components and if that can be the problem.

Maybe @joshua_lyon can answer this for you.

Yes, SharpTools can control components other than the ‘main’ component.

It sends across the command setColor({"hue": XX, "saturation": YY}). Of critical note is it does not send the level across as part of the color map. I’ve seen some drivers require that in the past and it’s caused issues.

@jsdray if you want to send a note to support@sharptools.io with the approximate time (and timezone) of a time that you tried to control the color and got an error, I can try to pull the logs to take a closer look.

It sends across the command setColor({"hue": XX, "saturation": YY}). Of critical note is it does not send the level across as part of the color map.

Rookie mistake… I failed to resync after switching from DHT to Edge Driver…
You guys are awesome. Thank you very much @joshua_lyon and @Mariano_Colmenarejo

Can this controller be used with a tunable white LED strip? This would be a 3 wire strip that mixes just warm and cold white.

This device will only work with simple LED strips that don’t feature any wireless capabilities or don’t have addressable LED’s or tunable white LED’s. You can use a single color LED strip with this controller, a 3-channel RGB strip, or a 4-channel RGBW LED strip.