Ah right that’s a bit different than my problem , mine always work when paired just won’t stay paired.
Have you tried manually adding a new device on yours through the ide using the zigbee code it might get yours working

Yeah, tried that multiple times. Had to add them manually through IDE using the catchall and then selecting the DTH, Got 2 out the 3 sensors working (1 door and 1 button working and 1 door not working)

We probably have a bad batch by the look of it.
I’ve tried most things except moving my hub to rule out interference but all my other Xiaomi products work.
I wouldn’t mind having the xiaomi gateway to see how that is.

Here is my experience with the temperature sensors. I originally paired them about a month ago (had 3 of them, twins room, sons room, and dryer) and they all worked fine for 2-3 weeks, never dropping out. I used the catchall method to pair. They were in pretty close range of the hub. About a week ago, I wanted to use one in our treehouse which is about 150ft away from the house where I have working contact sensors (likely repeating from a Centralite outlet also in the treehouse). So I took a working temp sensor (sons room) and just moved it to the treehouse. It didn’t have a connection likely because it was trying to reach directly to the hub). So I did the usual pairing procedure and it recorded the catchall data so I saved it and it seemed to work fine… The pairing only lasted a few hours and it dropped out. I tried multiple times to repair at night and by the morning it dropped. I then thought maybe it was a low battery so I put a new one. Same thing, dropped within about 2hrs. Then I took another known working one (dryer) from inside the house and paired it in the treehouse, again, only lasted a few hours. After reading more of the posts here, I see that others are saying that these Xiaomi sensors might not be repeating thru repeaters. Then last night, I tried to pair the same sensor that had worked prior inside the house and now it won’t hold the pairing! The one sensor that I originally paired (twins room) and haven’t touched is still working fine. Now I don’t want to touch this one at all in fear of never getting it working again.

This has lead me to believe that:

Other notes: I also have a Xiaomi motion and contact switch that I paired when I received all the temp sensors and the contact switch is working fine but the motion dropped out Jun 1st (maybe an update came thru?). I really hope we get to a solution because I have since purchased about 8 more sensors after seeing that that they originally worked and stayed paired for the first week I had them. Also, these are the non-Aqara version sensors

I have 0 dropped xiaomi devices in about 6 months. I have around 30 devices, 20 of them are xiaomi’s
I have one distinct difference:
I only use Zwave and Xiaomi Zigbee devices, no other brand Zigbee anymore. I used to have a few Orvibo’s and Osrams, but have taken them off and replaced by other Xiaomi’s
All Xiaomi door sensors are being repeated nicely by the Xiaomi outlets, all over the house.
I have an excellent experience with the (non aqara) xiaomi devices, which in my case are only oulets, door sensors and buttons.

I, too, have about 20 Xiaomi sensors (door/window and motion) and have not had a single one drop off. I have a few other Zigbee devices (Iris buttons, Hue hub and bulbs), but nothing that repeats for these sensors.

Some of my sensors are a decent distance up the stairs, through numerous walls, and all check in hourly.

I’ve made some long overdue changes to the contact and motion handlers. Sorry for the time taken, have had issues getting any free time lately. Will update temp handler later to incorporate better colour compatibility between c and f next.

@RInkelk @paulmike3
Could you guys just give a little info on your hub for me.
Is it located upstairs or downstairs and do you have any possible interference nearby ?
Routers, tv etc
I have my hub behind my tv downstairs next to my WiFi router, xbox etc.

Mine is in the central electrical area in the house (where all the fuseboxes are) There is also my router and all other stuff located.

Trying to locate the battery-info for the Aqara censor. Not that easy, because i don’t know the actual battery %.

If i assume the battery is 100% there is only one value in cluster.data that is that value.
Weird that the battery % location changed in the Aqara sensor, as it is used with the same Xiaomi Hub.

@a4refillpad Battery reporting on my temp sensor is not very good. It started at 90% and dropped down to 1% over a few days.

It still works fine, even after its been at 1% for a few days. Always checks in once an hour 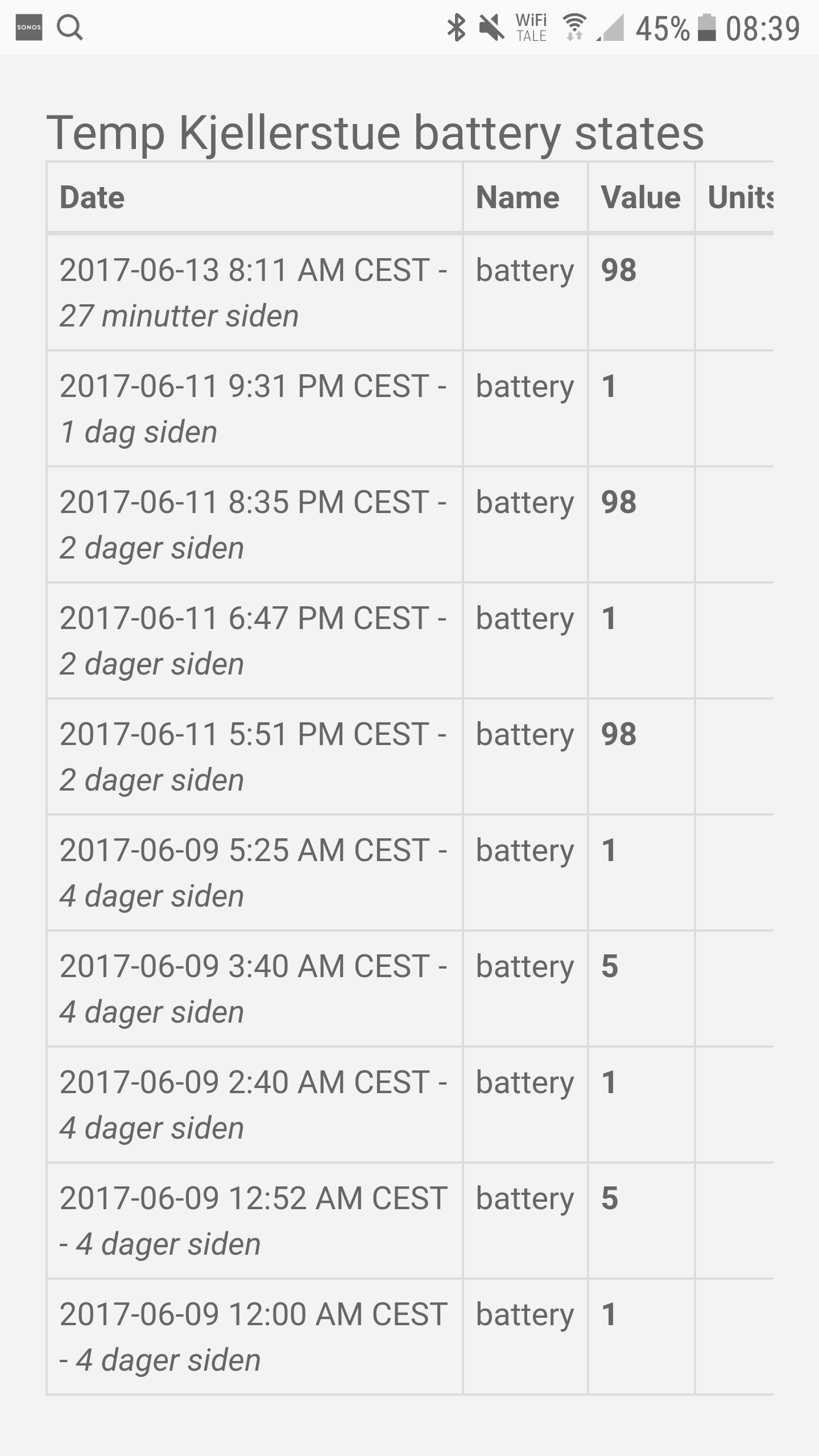 That’s interesting then as a lot of info suggests the hubs location may be the problem but yours is similar to mine and you’ve no problems.

Do you also only have Xiaomi devices like me?
(And maybe some xwave devices)

Yeah I quite new to this but have about
10 xiaomi door sensors
2 xiaomi buttons
2 ikea Tradfri lights (not sure if zigbee or z wave)
5 Sonoff WiFi and Sonoff TH switches
Oh and the devices that came with my SmartThings starter kit.
And I’ve just received my first xiaomi body sensor but it refuses to stay paired I get about 5 hours max until it drops off

Do you ever remove the power from the Ikea lights? Ikea lights act as zigbee repeaters and if you turn off the mains to the lights, the xiaomi sensor might stop working

Thanks didn’t realise the are repeaters :slight_smile but no they are powered at all times I’ve not even moved the sensor yet it’s sat next to the hub.
That’s got me thinking though I had a issue with one of my xiaomi door sensors not staying paired near the hub but when I tried pairing it outside on my shed door it stayed paired so might try that with the sensor lol

I have joined my Aqara sensor since 4 days now, still going strong (at 0%) no dropoffs.

Since it shows 0% (and a warning in the app) i changed the devicehandler to use item 30 from cluster.data (which is 100).
This is just a wild guess, but since the device is new, the battery might be 100%. But i have no idea.

WiFi can drown out Zigbee.

If “right next to the SmartThings hub” also means “very close to the WiFi router,” then that can sometimes be the area of the greatest Wi-Fi interference.

Siting your devices always involves a lot of local factors. Signal can bounce off of metal or mirrors back towards itself, creating interference patterns. The position of the nearest repeater may make a big difference. The traffic on both networks matters. So The fact that one person’s system works just fine when it’s sitting a foot away from their Wi-Fi router doesn’t mean that yours will.

Best practices say to position the SmartThings hub at least 3 m away from the Wi-Fi router and any Wi-Fi access point. And of course to position the hub centrally in the home, both vertically and horizontally.

If yours is working fine in a different position, that’s great, you don’t have to worry about it. But if you’re having problems with dropped messages, it’s usually worth Trying moving the hub to see if it helps.

BTW, even the furniture matters. I’ve told this story before, but one time we went into an office building where there were complaints that a system wasn’t working on a particular floor. Got there, and found that the access point had been put in a conference room inside a red lacquer Chinese cabinet.

As it happens, red lacquer has a high percentage of iron in it, which can definitely scatter signal. We put the equipment on top of the cabinet, and all the network problems went away.

“All home automation is local.” 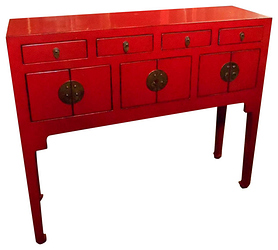