For folks using Nest Manager, these type of features are built-in to the Automations

vary control depending on time of day

The purpose of the zThermostat app is not to run on a schedule, there are many apps and actual physical settings that can accommodate those kind of settings. The idea behind the app is to maintain comfort based on environmental sensors. It does have the Away mode for when people are not home, which basically suspends the self adjusting temperatures and sets constant temperatures. Also the mode based restrictions work in the same way. For example, I use two instances of the app for the same thermostat one for night, which has lower temperature settings and one for day. When I get some time, I will convert this into a parent/child app to allow for more flexible settings.

A Nest Thermostat is useless if you have several units not linked together, rent your place and don’t want to pay 250 bucks times the amount of separate units you own. This app, in other words, is for the poor, or Middle Class in big cities such as NYC (where buying something decent not too far is out of reach unless one wants to leave in a studio), or those who just like technical challenges.

Hi there,
I have a CT100 thermostat that I would like to control with an AccuWeather temp. I have it set to change modes and send me an alert. I get the alerts, but my thermostat does nothing. I don’t see a place in director to assign my ct100 as the thermostat to control, although it’s the only thermostat I have in the system so I assumed that’s why it never asked.
Is there something else I need to do to get this to work? May is a very volatile time for temps and I would love to have the thermostat change modes without my intervention.
Thanks!

Can you post a picture of which app you are using? 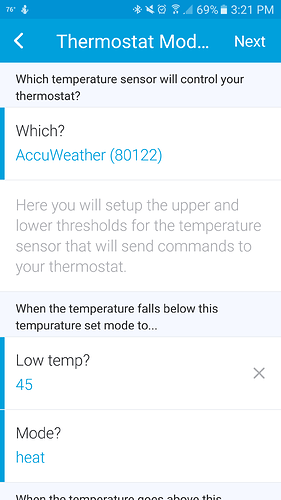 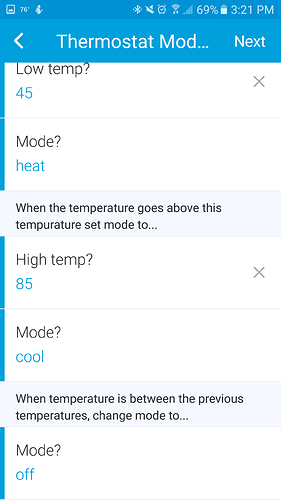 The other screens allow you to select a thermostat to control, but they force you to fill out other fields that don’t apply to just the mode/temp. this one is missing that selection.

screens allow you to select a thermostat to control,

Ah, that’s because those fields are required for the app to work…If I remember correctly, a door sensor is also required or else the app won’t work

It’s odd because I get notifications that it changed my thermostat’s mode, but obviously nothing happened. OK, if that’s the case, I will try another app like Schedule TstatZones and see if I can accomplish there.

You can try mine, is based on @slagle Mode Director app with some added functions and everything optional…

I’m going to check this out, thanks.

For Tim - thanks for the great app. A couple things:

first, I noticed that when picking a contact sensor it says “low temperature” in the box under “if these doors/windows are open turn off the thermostat regardless of outdoor temperature”. Am I missing something or is this supposed to just say “Which sensors?” or the like?

secondly, I think you should add the ability to add more temp sensors for detecting indoor temp and average them for a better overall idea of the house temp, kind of like (I assume) an ecobee 3 would do.

third and last, I think you should add the ability to either disable the app or adjust the range of the high and low temperature by +/- X degrees if nobody is home by checking motion sensors’ activity ("motion detected within previous X minutes), or by checking a presence sensor or geofencing possibly so the temp can get back to normal as you get close to the house. I don’t use modes (home away work etc.) so that feature doesn’t give me the control I’d like. Maybe you could even give the option to change the “boost” button to either boost or simply prepare the house for when someone is coming home but doesn’t use a booster.

Great app though and I appreciate the work you’ve put in.

There is already a smartapp that can do all this, and much more (i.e.,alternative cooling, zoned heating/cooling, smart vent control, fan control based on temp differential between indoor sensors, etc).

It’s called ScheduleTstatZones, and it’s been available for more than 2 years now:

Hello there, ** UPDATE ** My smartapp is now officially approved by Keen Home: [image] This is the ultimate flexible smartapp for anyone who wants to better control her/his thermostat(s), and creates heating/cooling zones using Smart Vents like Econet, Keen Home vents or Ecovents. With this smartapp, you can also create “virtual zones” (without any vents) where you can then adjust the thermostat’s heating/cooling setpoints based on the avg temp calculated from different room sensors with the ‘occupied’ option or not. Actually, it should be the only smartapp that controls your thermostat(s) at home!! Latest versions: ScheduleTstatZonesV9: new major version with added custom capability in MyVirtualZone DTH for Setting Zone setpoint under the new Samsung connect app! V8.8.9 EcobeeSe…

The code is stable and a lot of users love it!
Regards

I’ll keep it in mind if I ever expand my system. I am however interested in a double tap app that works reliably if you’re looking for a new app idea - double tapping a light switch to get it to trigger other lights to turn on/off. Smartthings’ version as well as a community made “double duty” are just way too unreliable.

So I’ve set my app to cool the house once it hits 72 degrees yet the thermostat read up to 74.5 today. Does my programmed swing temperature affect this? Does the scheduling programmed on the thermostat itself override this app?

I know I need to update the app with my latest comments, but here it is…

What does your Main page says?

In my example below, when the average of the remote sensors reaches 76, my thermostat changes to cool and sets the temperature on the tjermostats to 75 (cool)

This is the Ambiance page…

Here is the cooling setting. If average temperature reaches 76, then the mode changes to cool and the app sets a cooling set point (on the thermostat) of 75 …

Does my programmed swing temperature affect this?

Not sure what you mean by programmed temperature? Local schedule within the thermostat itself? If that’s the case, then yes, the two will conflict and potentially overwrite each other. The smart app is driven by ambient temperature, whereas a scheduler is based on time.

Yes schedule programed on the unit instead of an app. Swing temp is when you set a target temp and allow it to vary by +/- X degrees. My swing is only set to 1.5 degrees so thats not the issue, I need to check the schedule because it IS set and may be the culprit. EDIT: Its only set to max out at 72 degrees with a +/- of 1.5 so it shouldn’t be the reason for the temp getting up to 74.5 degrees.

Even if my thermostat schedule overwrote the app, wouldn’t the app recorrect it after the temp was set by the schedule? It sets it once at XX:XX o’clock and thats it, they wouldn’t fight back and forth about it.

EDIT: i wasn’t using your app but I’ll give it a try.

wasn’t using your app but I’ll give it a try.

Oops, I’ve got the threads mixed up… Sorry… I’ll let Yeves troubleshoot his app. Let me know if you have any questions here, or on the other thread…