I’ve read through most of the post and seen at least on other person is attempting to use this dual relay switch to control a whole house fan (with hi/low setting). I’d like to use it for the same purpose and would like to basically only allow either switch 1 or 2 to be On at a time (or both off). Is this possible with this device?

I’ve read through most of the post and seen at least on other person is attempting to use this dual relay switch to control a whole house fan (with hi/low setting). I’d like to use it for the same purpose and would like to basically only allow either switch 1 or 2 to be On at a time (or both off). Is this possible with this device?

@lweisenb I am looking to do the same thing as you. Did you ever move ahead with your implementation? How did you get around the potential problem of turning both switches on at once?

I am going to use the QuietCool Brand . Their energy efficient line called Energy Saver . Model QC ES-4700. It pulls 5.07 amps on high speed and this dual relay is good for 10amps per relay. That sounds good but motors pull more amps on startup and this device does not give a HP rating ( and neither does the fan interesting enough) so I am going to ask the both companies directly to make sure this switch can handle startup current.

I am also going to ask them if I accidentally turn on both switches at once and send current to the low speed and high speed wires simultaneously if it will hurt the motor or if it will just default to high speed. I will find out and post what I hear as many have this question because it can certainly happen by accident. It may or may not be an issue based on how the fan was designed. It sure would be good to know. These fans ain’t cheap!

How did you get around the potential problem of turning both switches on at once?

You can only do that if you send commands to both switches at the same time, or if you wire it such as both channels get the the signal from the same physical switch.
Otherwise the two channels are separate.

You can only do that if you send commands to both switches at the same time, or if you wire it such as both channels get the the signal from the same physical switch.
Otherwise the two channels are separate.

You are obviously not a believer in Murphy’s Law

The Physical switch to change speeds for these house fans is a toggle for a reason. They really don’t want you sending voltage down both fan speeds at the same time. As much as I love Zwave and SmartThings and think it is bullet proof when I turn on and off switches, it isn’t. As much as I trust that I cant accidentally turn on two separate switches at the same or forget to turn off the slow speed switch before I turn on the high speed switch on my SmartThings app, I can’t. It would be cool if you could make these two switches work like a toggle in SmartThings but with the transition to the new App and my very limited software expertise I would dare try to see if that could be accomplished in the short term. And I still would not trust it anyway.

I’ll feel a lot better when I hear these QuietCool fans wont blow up circuitry if voltage is accidentally applied to both speeds at once. If it becomes an issue, a relay can be added to to one of the speed circuits that cuts off that circuit when voltage is applied to the other speed. It makes the implementation a bit more difficult but certainly is not a show stopper.

@lweisenb
I just got off the phone with QuietCool. They confirmed it will fry their ECM (Essentially the control module of the motor) if you apply voltage to both the low and high speed circuits at the same time.

One way around this which I mentioned in my last post is to put a relay on one of the two fan speed circuits that will kill that circuit if the other fan speed is turned on. That is the direction I am going to go in. Would still like to hear what you ended up doing in your implementation!

I AM a believer in murphy’s law which is why I think I’m going to skip the Enerwave for the quiet cool and instead go with 2 smart switches, one for power and one for high/low.

I AM a believer in murphy’s law which is why I think I’m going to skip the Enerwave for the quiet cool and instead go with 2 smart switches, one for power and one for high/low.

I’ll have to find the wiring diagram I’m following, but basically switch 1 provides power, the load wire from 1 then goes to the common wire on switch 2 which is a three way switch for high low control with one travel going to each. The three way switch will only power one traveler at a time. It’s been too hot to install, but we’re getting to the end of August so I’ll most likely install in the next few weeks. I think at this point I’m going to start with switch 1 being a GE smart switch and switch 2 being a standard dumb 3-way (I have a feeling I will most likely only use one or the other speed) and if I find I am often wanting the speed to change I’ll look at changing to a smart 3way. 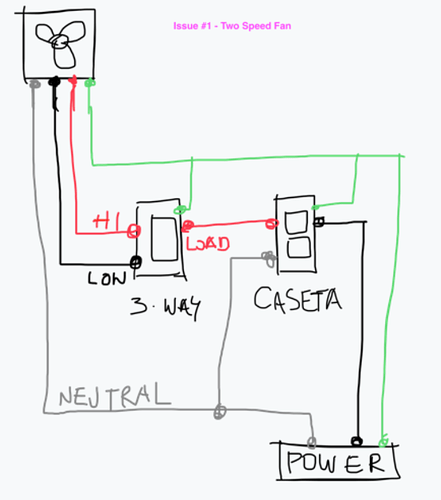 That diagram should work well with a GE Smart switch and a dumb 3 way as you describe. I’m thinking I will use the two speeds a lot. Hi speed for 1-2 hours in the evening to get the large cool down and then low during the night for xx amt of hours until the temp gets to a certain point or a certain amount of hours go by, and the smart system can just turn it off automatically.

I just put together my diagram below as I could not find anything online that matches. It is a single gang box solution as the Enerwave unit, as you know, is small enough to go behind the dumb on/off/low toggle switch. To create a fail-safe if (when- LOL) both of the Enerwave relay’s are turned on at once, there is a simple relay added for the low side (just because it has a lower amp draw it is better to set it up through the relay rather than the Hi side). It will be normally closed and when power is sent to the hi side of the fan it will engage the relay, cutting off the low power circuit just in case that goes on at the same time. 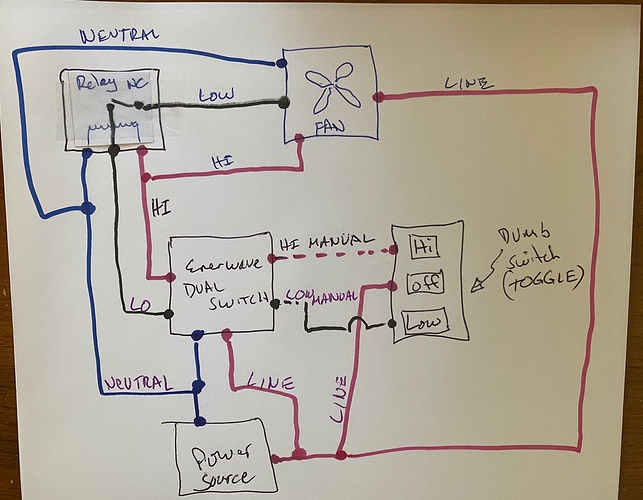 If anyone can think of a better way to do this and keep it in a single gang solution, let me know! The relay in this example will be up near the fan in the attic.

Here is my Final Final (unless, of course, someone has a better idea

)
This incorporates a DPDT relay. Since Hi is NO and low is NC it is a bit safer as both speeds go through the relay. No way for them to be on at the same time. Put a 30A relay in ($18 on Amazon) to ensure even turning on the fan at high speed (5.1 A continuous, more on startup) wont burn out the zwave relay. Low speed just goes directly from the zwave relay through the other relay but low only pulls 1.1amp so even at startup should be well less than 10A which the Enerwave dual relay switch is rated for. Keeps the manual Hi/Off/Low Toggle switch on the wall which is important for the wife who hates SmartThings LOL. And only one gang is required which is nice as the zwave dual relay and 30A relay will be in a box in the attic. 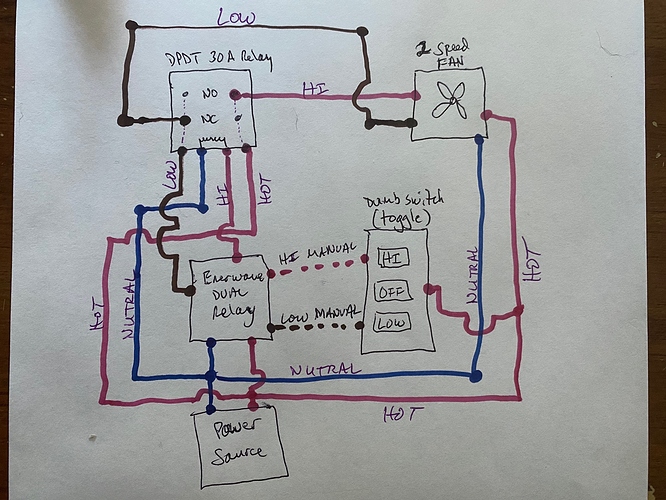 I have 3 of them and they all stopped working once I was migrated to the new Smartthings.

I first tried changing the types, but that did not work. I also tried removing and adding again, but each time it added using Eric’s device handlers.

Here’s how I added them using the new Smartthings App and IDE:

Hope this helps anyone else that is fighting with trying to get it to work. Once I got it to work on the first one, it only took about 5 minutes to do the other two.

I am installing some new [Enerwave ZWN-RSM2-Plus switches, using the new ST app. Per your instructions, @J-man95, I switch the device type to Z-Wave Dual Switch and it creates the second switch for me. That’s pretty cool. But when I toggle the physical switch it does not inform the hub that the state has changed, which confuses my automations.
Do others have this problem? What do I do? I see old messages like this Automating existing outdoor motion sensor with relay that have code to address this issue. But I assume that wouldn’t apply using the Z-Wave Dual Switch device type. Am I wrong? If so, where should I put that code? There’s no custom device anymore.

Note that I’m having the same issue with a Monoprice 11990, but not with my other two of those. They are doing fine updating the status when I toggle the physical switch.

Hello everyone. I just purchased the Enerwave RSM2 dual relay. I haven’t installed it yet but I wanted to clarify a few things. After reading through this tread it sounds like this custom device handler does not support the new Smartthings apps? Is that correct? It also sounds like instead you can use a standard/stock device handler?

I’m also curious if there was any advantage with this custom device handler or was there no device handler available at the time? Were you able to do things like toggle the light switch twice to trigger other actions like turn a light on in a different part of the house etc?

Got everything installed. Was pretty easy to do. I was able to answer my first question. erocm1231 code works just fine on the new smart things app. I used the Parent Device Handler as well as the Child Handler . The parent device controls both switches and the child devices will control each switch independently. One thing I noticed was the icon for both child devices is showing as an outlet instead of a switch.

Does anybody know if someone is working on an edge driver for ZWN-RSM2-PLUS?

@erocm1231 any chance you are working on an EDGE driver?

Sorry, but I am not.

For anyone else looking for a solution. The Zooz drivers work with enerwave