I configure to use with Sonos, choose a Sonos speaker; set Check device status every 5 mins; set volume to 35; choose 6 modes in which to talk; set Don’t Talk Before to “6:30 am”, then…

When I click “Don’t talk after”, no time window appears. If I click it again, the entire ST app (iOS) crashes.

I have version 2.0.4 (1189) of the SmartThings iOS App ( Press the 3 vertical dots in the top right corner, then press Support, scroll down and you should see your ST App version).
My iPhone is running iOS 9.1 (13B143) as seen from Settings > General > About > Version

No problem. The only difference between our setups is that I’m using iOS 8.4.

Any way to get big talker to give me a weather report when a switch is turned on? Would be an awesome feature.
B

I’ve had several requests for weather reports. I just need to figure out how to integrate it.
It’s on my road-map for a future release.

Awesome! A feature I’d be willing to pay for!

I planned to release a new version this weekend. I’m backtracking slightly. I’ve added weather functions tonight and due to this, I am instead releasing a Beta version before calling it good to go.

Important Note: I’m still seeing issues with SmartThings ability to convert some text to speech (mainly new unspoken phrases). I’m catching the error that SmartThings throws when it has trouble converting text to speech ( java.lang.reflect.UndeclaredThrowableException ) and am instead throwing your message to your phone/device/SmartThings App via your notification settings (push/text) so that you at least still get the notification when the speech phrase cannot be converted from text to audio.

BigTalker 1.1.4-Beta1 has been published.
Please test and let me know via PM or by posting an issue (clickable link) to the project on GitHub.
Major thanks to @Greg for using/testing/reporting on several unpublished Beta versions to make this happen and get us this far!
If nothing major is reported, this will soon become BigTalker 1.1.4.

Love BigTalker, thank you. The feature I would like the most is a door left open notification, something that will annoyingly repeat it self 10 or so times after a set time left open.

Should be resolved in 1.1.4-Beta3(clickable link). Thanks @binhton for reporting and testing.

The feature I would like the most is a door left open notification, something that will annoyingly repeat it self 10 or so times after a set time left open.

This feature has been requested and is planned for a future version(clickable link). I’ve been focused mostly on resolving bugs lately and also waiting on SmartThings to fix the somewhat broken textToSpeech() function. Until this is implemented into BigTalker, you could use my modified version of the Door Left Open SmartApp(clickable link) which adds verbal announcements and repeat up to x times.

Just a head’s up… Big Talker works great with my SmartThings/Android driver pair (LANdroid) to turn an Android phone/tablet on the LAN (and also via SMS) into a SmartThings speech device/alarm. Love it.

Can you please explain me better where I can add the zip code to determine the weather?
I would like to be able to add an italian zip code
thanks
fab

It uses the zip code of your SmartThings Hub Location.

I may adjust the variable before releasing 1.1.4 to allow you to add a custom zip code in the variable string. Perhaps something like %weathertoday(xxxxx)% where xxxxx would be your desired zip code for the announcement.

I may adjust the variable before releasing 1.1.4 to allow you to add a custom zip code in the variable string. Perhaps something like %weathertoday(xxxxx)% where xxxxx would be your desired zip code for the announcement.

This is now available in the latest beta code: 1.1.4-Beta6 Available here if you wish to try and give me feedback on it: https://github.com/rayzurbock/SmartThings-BigTalker/tree/1.1.4-Beta

When typing out your custom phrase, type in the custom variable you want

this from live logging

so it seems that I have two problems here 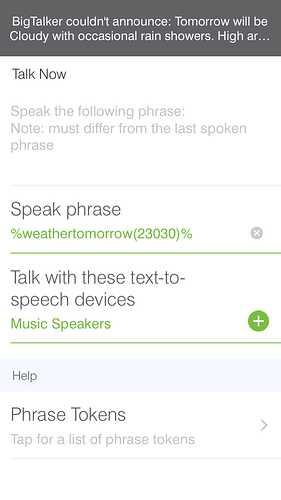 The Weather Underground API uses US Zipcodes. I just tested the following and it seems to work:
%weathertomorrow(italy/valfura)%

I have not tested all of these, but it looks like you could possibly use any one of these in place of the zip code:

I added country/city but I can’t hear the speaker.
As soon As I click done to save the smartapp settings I get this notification “BigTalker cound’t announce…”
Can you help me undestanding what is wrong? 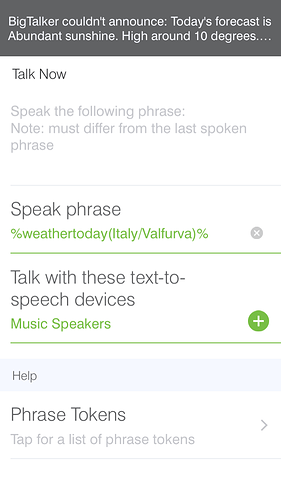