I don’t have any personal experience using these but it seems to generally have positive reviews and already has built in Alexa integration. It looks like an interesting product. 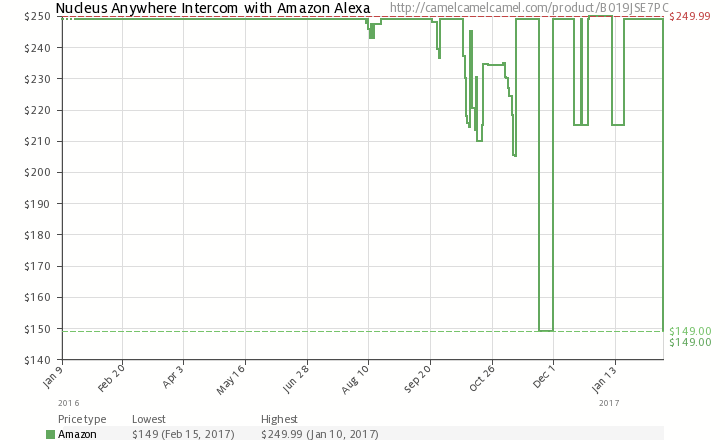 Some community members have it, including @Andy_Armijo . Further discussion in the following thread:

Intercoms through the house? Projects & Stories

The Nucleus intercom is new. It’s basically a pretty UI on a dedicated tablet that also allows you to call in from a phone. You can’t use the tablet for anything else. It also has the hands free Alexa service, which gives you some of the features of an Amazon echo, although not all (for example, no Spotify) and it doesn’t have the echo’s hardware advantage in farfield recognition. But it’s a tablet you can hang on the wall and use to video call another tablet either in your house or someone else’s house, as well as calling from a phone. Pros: should be really easy for kids to use, just press a picture tile to open a connection to another nucleus tablet. Because of the Alexa service, you can also use it for hands-free voice control of SmartThings Has both audio and video Should be ex…

I ordered two from Lowe’s using the $50 off coupon. Seemed like a perfect solution for my kid to intercom to my wife’s dad who lives in our back house. Also interested to see what Necleus announces tomorrow during their webcast. Cheers!

so… the price dropped is because they will have something to announce tomorrow?

so… the price dropped is because they will have something to announce tomorrow?

From what I’ve read they’re announcing new features to the software. I haven’t heard anything about new hardware, but I guess it’s entirely possible. I’ll hold off on opening mine when they arrive today.

I have 4 of these in my home. I beta test for them. I can’t disclose anything, but I don’t think the announcement has anything to deal with SmartThings

But it is still pretty exciting!

How do you manage to get a gig like that?

I got on a long time ago. If you purchase them, you can email them and let them know you want to be a trusted tester and they will add you to the list. Their customer service is always ON TOP OF IT!

I currently have a Blink in my playroom so my wife can keep an eye on the 2 and 4 year old when they are down there. She hates the Blink because she has to constantly click “Continue” to watch it. I thought the Nucleus might be a good option because we sometimes need to chat with our 4 year old as he calls us or we call him. A few questions for you folks who have them:

The one thing that might not work is the kids might just grab it from the tv stand and unplug it. I wish it had a battery backup…

Not an answer about the Nucleus, but if you use live view in @RBoy’s Blink smartapp it does not require pressing a continue button.

Thanks for this. I have that setup, didn’t realize it avoids the “Continue”. I can’t test now b/c my battery is dead and they are sending me replacements since they “prematurely died”.

These have dropped down to $99 at Lowes for a few days now. 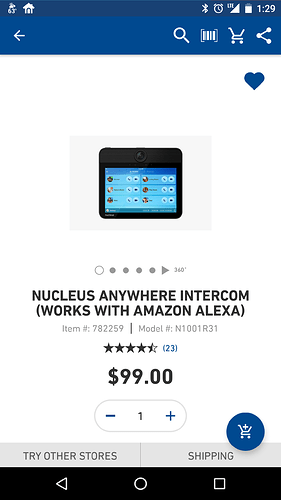 I bought a few of these a while back for a fun way to keep in touch with family in other states and for a home intercom. We use it more often the I would have thought. Not the greatest sound or video but decent enough. Nucleus has continually made upgrades and added features that are actually useful.

Need to get rid of them before the Echo Show starts shipping next week.

Need to get rid of them before the Echo Show starts shipping next week.

Different form factors, so there will still be people who want the nucleus. The nucleus is much easier to wall mount, for example. The price will definitely be part of the calculation for most people.

There is an option in the Nucleus settings to be able to do a “drop in” or something along those lines. You can also set it to auto answer when getting calls from devices in the “family” group. Its how I keep an eye on my dog from work and have the ability to yell at her to stop chewing the couch when need be.