In the US, people typically have two or even three single point locks on the same door. The deadbolt is one lock, the door knob has another lock, and sometimes there is a second deadbolt. So the safety is the same but it takes more devices.

As others have said, I would not have a wall switch in my house that required cloud-based support to turn on a light in the room. Networking delays and service outages will cause great frustration to users that know how conventional lighting is supposed to work. I would recommend adding smarts behind conventional switches that control their loads directly or get an integrated smart switch that does the same. As long as you have power, such switches will work just like a dumb switch would.

However, if you insist on controlling an Aeotec Nano-Switch/Dimmer with an Aeotec WallMote, I would recommend configuring the WallMote to do so directly without any dependency on SmartThings. I have a couple of WallMote Quads with one button that is configured this way. If I have power and z-wave connectivity between these devices, the button will work. There is no dependency on SmartThings, Internet access or cloud services.

I would not have a wall switch in my house that required cloud-based support to turn on a light in the room.

With 200 devices it sounds like this guy is going full-automation, similar to what I have done. With “full-automation” no one touches the switches. Motion sensors, contact sensors, power monitors are all you really need (there are exceptions) to turn the lights on and off.

Which basically for me means forget it!

Than you for these suggestions. I think a meeting with the carpenter making the door is in order. He said the lock is going to be like this one in the pic attached. 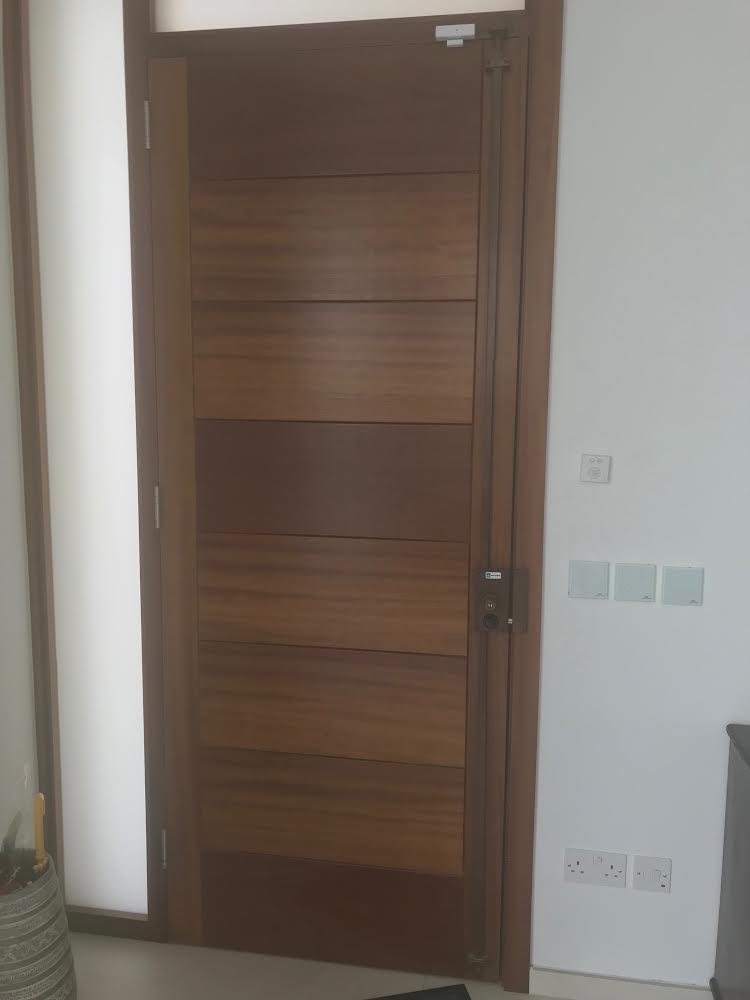 You can see the key inserts at only one point, but locks above and below, and to the side. I think he called it a Three-point system, but am not completely sure. Then I will see what device I can find to somehow open it - but itis quite a bit of mechansim to move using just batteries. I’ll see what comes out of that meeting as I am even less of an expert on lock terminology and so on…

I know what you mean - you do not want to lose the ability to switch lights on or off when Internet connectivity is out. I agree, but now I have ordered a small test kit, and so I’ll test it.

Thank you for the idea on the Wallmotes with direct connectivity to Nano-Switches and Dimmers. May I ask however a novice type of question: If nano-switches and/or dimmers are already paired with Smartthings, then you cannot directly control them from a Wallmote, can you?

But then you still need the switches. Sometimes you just need to override for who knows what reason, but especially if we have guests in the house (which happens quite often here). And so the switches, although they might not be touched - they just need to be there, and they need to be elegant, else I’d have a problem with my wife

Thanks - that’s much better.

I would not have a wall switch in my house that required cloud-based support to turn on a light in the room.

With 200 devices it sounds like this guy is going full-automation, similar to what I have done. With “full-automation” no one touches the switches. Motion sensors, contact sensors, power monitors are all you really need (there are exceptions) to turn the lights on and off.

That’s not what I understood. Anyway, while my WallMotes and Nano-Dimmers/Switches are configured to have direct conversations, they are also SmartThings devices that can be automated. In fact, some of the other buttons on my WallMote affect the same Nano-Dimmers (in ways that cannot be done directly) through SmartThings and they are also indirectly affected (through SmartApp automation) by other sensed events.

Than you all for the valuable input.

Incidentally, I am still awaiting my parcel from Vesternet, took longer than I expected. Through Track and trace, I can tell that I will likely receive the items within 2 days. I’m sure I’ll have plenty of problems then

If nano-switches and/or dimmers are already paired with Smartthings, then you cannot directly control them from a Wallmote, can you?

Yes, you can. Use SmartThings to define/inspect their z-wave network and configure them (I used z-wave tweaker) per Aeotec documentation

Samsung SmartThings SmartApps and Device Handlers. Contribute to codersaur/SmartThings development by creating an account on GitHub.

@martin.borg - with all those automations and pesky guest visiting… make sure you create a lot of virtual switches so you can quickly turn automations on and off. I have about 30 of these… 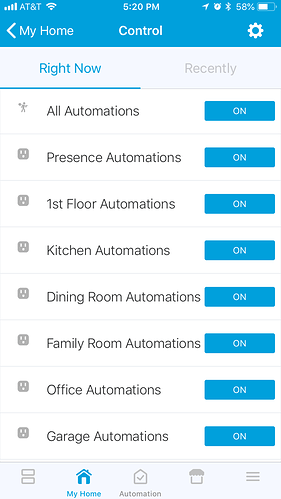 Once set up, the direct association will work even if the hub is missing altogether.

“Multilevel Switch” in this context means basic commands for dimmers.

Here are the associations for the Wallmote:

Remember also that once you set up direct association, it always works in exactly the same way. You can’t limit it by time of day or whether someone is home or not or a smartthings mode. Every time the trigger action is performed, the basic commands will be sent to the target devices. And you will never be able to disable it without completely resetting the device. So you may need to think that through also.

Also note that it doesn’t support double tap. Just touching each of the four buttons activate direct associations as noted at that link.

In a smartthings environment, direct association is most useful for setting up a “virtual two-way” since it’s likely that you always want the auxiliary switch to trigger the master. But once you get into these multi button switches, people tend to be more likely to want to put various logic restrictions on them.

Also remember that the mobile app will likely get out of sync with the other devices when you use direct association.

But you may find it helpful, it’s just probably going to take some careful planning to get the results that you want.

Just remember that you will be limited to only basic commands …

You can turn on/off (press) and dim up/down (alternately) with a press and hold. On my WallMote (WM) Quads, I have the first button directly associated with their Nano-Dimmers (ND) in this way. For me, dimming is a little frustrating because the ND reaction lags the WM action.
This is another reason why a hard wired momentary switch would be better. YMMV, I suppose. For this reason, I use the other three buttons to go through SmartThings (ST) to set low, medium and high levels. While this increases the lag, I know what I am going to get when I press the button.

… and only to other Z wave devices which are within 1 hop of the trigger device.

I did not know that.
Are you sure?
Why couldn’t they get the z-wave route from the hub?
Sigh, I wish there were a way to tell how z-wave devices route in a ST environment.
Anyway, mine work for me.
Perhaps that is proof they are within 1 hop.

Also remember that the mobile app will likely get out of sync with the other devices when you use direct association.

In general, yes, this can be a problem. With the Aeotec Nano-Dimmer this problem can be overcome with a configuration change: Set parameter 80 (which notification to send ST when the state of the ND load has changed) to 3 (send multilevel switch support).

Thanks again - to everyone. It seems associations can get quite complicated!

I will start off with the simpler tasks and take it a step at a time. In the meantime, I have received the package from Vesternet and am already facing a few challenges of a physical nature, but it’s quite exciting to finally have the stuff here. I’ll try to find some time over the weekend to set up the hub and get it up and running, at least. Lots of research to do now to understand the Smartthings environment, but hopefully, I’ll be back with some more intellligent questions after this weekend.

You might find the following FAQ helpful for the next steps:

Thanks a lot JDRoberts!

In the article, the author (you

) says: “March 2018: All of the following applies only to the SmartThings Classic app. If you purchased your hub after March 1, 2018 and are using the new “SmartThings (Samsung Connect)” app, creating rules works differently.”

Well, it’s certainly past March 2018, so which app do you recommend I download, and if it is the new one, then is there an equivalent article for it?

I only have an iPhone, and no tablet. It better be good enough and usable enough from an iPhone

Well, it’s certainly past March 2018, so which app do you recommend I download

While the new App is compatible with officially published Devices and has a few nice new features, there are enough “Classic” Features missing from it that you will have a better overall experience using Classic, IMHO.

More importantly, if you want assistance from the Community and end up being recommended to use any custom DTH (even one!), then we all have much more experience with Classic than New.

Finally, if your configuration in Classic is stable, you can safely also enter the New App and use and explore its features … except for custom DTHs, and no porting of Routines, and a different implementation of SHM. You must take care to confirm that both Apps are connecting to the same SmartThings “Location” (confirm your list of Locations under https://account.SmartThings.com > My Locations.

@JDRoberts do you know of any other links to pictures of whole house implementations, particularly of Fibaro modules such as the Fibaro Dimmer 2. I’m particularly interested in the layout of the central hubs which might house 10 or so Fibaro Dimmer 2 modules in one place.

I think most of Robin’s photos/ posts have been deleted so wondering if you know of others?