that’s the problem. I can’t differentiate the profiles because they have the same parameters in the raw (except ep)

Well, the only thing that occurs to me is that you assign the profile of 2 components to the 2 devices.
In preferences, you create a preference to change the profile so that you can assign a simple socket profile to the component you want.

@Mariano_Colmenarejo i have lost control of my Fibaro RGBW controler using your driver, all available on off buttons when tapped result in a pop up that says network or server error, has there been some ST changes that have changed how the driver works ?

Likewise if ‘off’ i get same pop up error, after a few attempts it occasionally sends the off or on command to the device 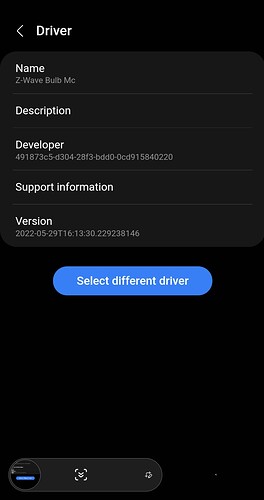 The driver has not been modified since May 29. If something has changed, it must have been the app or something in the hub.

Let’s see if other users have noticed something too

Let’s see if other users have noticed something too

All my Fibaro Dimmer 2 stopped working a while ago with this driver. I also added a new Fibaro Dimmer 2, all the tiles just showed the cloud symbol. Did not have time to troubleshoot, so I uninstalled the driver.

All my Fibaro Dimmer 2 stopped working a while ago with this driver. I also added a new Fibaro Dimmer 2, all the tiles just showed the cloud symbol. Did not have time to troubleshoot, so I uninstalled the driver

I don’t have any fibaro dimmer 2 device to test this.

Please, has any other user had problems with the fibaro dimmer 2, paired with the ZWave Switch Mc driver?

@nayelyz Are there any plans to add the FIBARO fgk-101 to edge driver list? Or has it already been added somewhere and I’m not seeing it? I currently use The stock “Z-Wave Door/Temp Sensor” driver.

I have had no issues with my Dimmer Single using Z-Wave Switch Mc driver, I also have a Switch 2 that is trouble free,

Would it be possible to add more settings for the Dimmer 2 (FGD-212)? For the longest time I’ve been using codersaur’s custom DTH that allowed setting the default switch on brightness level (ConfigParam19) and also the NIGHTMODE options which allowed you to set a lower switch on brightness level between specific times. As I understood from the DTH, it stored the previous value of ConfigParam19 in cache then set it to the new lower value until the end time happened before switching it back.

Hi @Cokecan72
The parameter 19 can be added, But it will be in a while, remind me in August, I won’t have access to the CLI for a long time

I have made a Z-Wave Switch Test driver for you to test the implementation of parameter 19-Forced switch on brightness level.

You can install this driver on your Hub and perform a driver change on the dimmer you want to test.

It is possible that for the custom Capability “Forced switch on brightness level” to appear you have to close the app and clear the cache of the app if you use android.

I don’t think it’s necessary to reboot the hub.

When you try it tell me how it works, please

Is that device connected to a stock driver? It is helpful to know the current device situation, for example:

In this post, there’s further info about the migration of the devices depending on their situation:

If your Zigbee or Z-Wave device is currently backed by a Custom DTH (not published in the ST repo) and you have a replacement community Edge Driver on your hub, ST will migrate those devices for you to the installed community driver (What is highlighted in Option 4 from the FAQs). Please note this will not work for Lan devices. Also, because we don’t know the entirety of the custom DTH was and what it’s replacement driver is, we cannot guarantee the expirence will be exactly the same (as we haven’t reviewed the code of either and it isn’t in our repo). When in this situation, I recommend to please check the name of your preferences between the Customer DTH and the Non SmartThings owned Driver. If they are not the same, preferences will not migrate. I don’t know the previous communicat…

I think this is the device, right? I haven’t found that fingerprint in the Driver nor the DTHs…
https://products.z-wavealliance.org/products/1620?selectedFrequencyId=-1

yes that is the device. i originally used a custom dh but then switched to a stock dh that would show running local.

Thank you for sharing your drivers @Mariano_Colmenarejo.

I’m unable to enrol my second hub to your driver. I have not had an issue enrolling both my hubs for other edge drivers. Is that perhaps a limitation on your side, or could it be an issue on the Smartthings side?

Is that perhaps a limitation on your side, or could it be an issue on the Smartthings side?

@orangebucket may be able to help you identify the problem. I think something similar happened to one of his hubs.

@orangebucket may be able to help you identify the problem. I think something similar happened to one of his hubs.

My current situation is that I have a Location owned by an admin account and two hubs also installed by that account.

When using the CLI I can do a lot of Edge stuff using my personal account but it can’t see my hubs. I have to switch to the admin account to deal with the hubs. Similarly in the apps only the admin account sees the ‘Driver’ option. Curiously when using invitation links etc my personal account can see my hubs. I can’t remember if it can successfully do stuff beyond that.

When I first set this up (it was a fresh install to get my Location onto the EU shard) I had weird inconsistencies between the hubs and what could be seen and done with both accounts with regard to Edge. I’d have to revisit my own posts to remember what.

While trying to get the confusion resolved, I was asked which account had installed the hubs as if that made a difference. I wasn’t aware that hubs could have an owner other than the Location, and if they can I have no idea how you find out who it is.

I don’t recall ever doing anything to fix things. They just started behaving consistently. Which is annoying and no help whatsoever.

Thank you @Mariano_Colmenarejo. It appears to have been an issue with the Smartthings platform.

@Mariano_Colmenarejo
Mariano, is this thread only for Fibaro devices ?
I have a few Greenwave power sense plugs that are zwave, just wandering where to request inclusion into a driver

is this thread only for Fibaro devices ?
I have a few Greenwave power sense plugs that are zwave, just wandering where to request inclusion into a driver

It might be better to put it in the request thread for more people to see.

I will comment this, not for you, for everyone who reads it:

Adding zwave devices to drivers can be more complicated than zigbee.

Zigbee almost all standard devices speak the same language and for the same clusters.

Z-waves, depending on the manufacturer, can send the same information through different command classes and have to use subdrivers, although the defaults usually handle all the posdibilities.

There is also the problem of configuration parameters, which do not exist in zigbee.

That said, I will try to add zwave devices with capabilities that use default handlers and that the driver has a generic profile without parameters in preferences.

Normally the parameters of the device are not changed when uninstalling it from the dth and reinstalling it with a driver.
If you have to reconfigure it, you can use the Z-Wave Device Config Mc driver.
By the way, in the last update of the app they have fixed that the routines are not lost when changing to this driver as many times as you want, I do not know if this will be maintained or in the next update it will be lost again.

Thank you Mariano, i was confused why there were no threads on the forum with Zwave finger prints being added like zigbee, i thought i was going mad

Would you prefer i DM the details or post in this thread ?

Would you prefer i DM the details or post in this thread ?

Please, post it in the request for Edge drivers thread, so other users can see it