This is the first I’ve seen of this idea for motion detection (microlocation) within a home. Somewhat steep price and unproven technology; but very cool sounding/looking idea. Each system would cover an entire floor and using the floorplan input, it would know what rooms have movement. I’m highly skeptical of Indiegogo campaigns and am not backing this, but was curious what the smart folks here thought.

Not liking the $10 monthly fee either…

This smart security company wants to break into your home

Xandem Home, now live on Indiegogo, can track motion through walls, activate alarms and even integrate with your smart home. 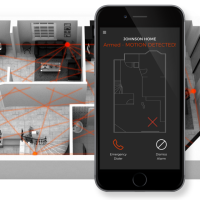 XANDEM HOME tracks the movement of people for security, automation, elder-care and more. | Check out 'XANDEM: Monitor an Entire House Without Cameras' on Indiegogo.

Scott, Joey Wilson founder of XANDEM here. I appreciate your interest in what we have created, and I also understand your skepticism about crowd funding. It drives me nuts when I see products that are basically just concept renderings, especially because they are so often oversold.

We knew going into our crowd fund that it would be important for people to know that this technology really does work, and that’s why I’m responding to your post. A couple of things to give you an idea of the legitimacy of this tech:

If you have any specific questions, we’d be more than happy to answer for you. Hit us up on the comments page on Indiegogo or email us at info@xandem.com,

OK, it looks like the company is for real. They have a commercial product, they have a couple of patents.

However, I’m going to say up front that it drives me absolutely crazy that they didn’t publish the frequency they’re using anywhere in the consumer or indiegogogo materials. I had to go to the website and dig into the product manuals and find the FCC information for the commercial product. This is a blanket-coverage always-on product. The frequency matters.

Based on the commercial product, it’s in the 2.4 band. That can cause interference with zigbee home automation devices.

My guess would be that if you set this system up so that it actually works, your SmartThings arrival sensor will no longer know that it’s home. That would have to be tested, obviously, but it’s a pretty important issue.

As with most indiegogo projects, the timeline looks completely unrealistic. I would be amazed if this ships in the spring. But I could be wrong.

If you have a medium size dog, it’s going to set this off. Obviously that only affects some households but it’s something to be aware of.

A lot of people are looking at micropresence technologies and there’s a lot of interesting stuff out there. Clearly there’s a lot of engineering that’s going into this one, and I can see the value for commercial building monitoring.

I’m just not convinced it’s going to play well with others in a residential home automation set up. Most of us are trying to move as many things as possible out of the 2.4 band to make room for zigbee and thread.

It’s also possible that the Xandem system will think your home automation Zigbee or thread devices are attempting radio jamming of their security system and trigger off of that.

Thank you for stopping by and offering more info! Looks like JD got to the first major question about the frequency used and any real world tests of interference with wifi and other common HA frequencies like Zigbee/Thread/Zwave.

Personally, I stick to low dollar risk ventures in the crowd-funding space, so I’m not your target early backer. But definitely interested in the tech and product for the future of HA!

Thanks for the feedback. You have the option to change frequencies to avoid interference with other devices. We’re adding info about our spectrum use in our FAQ on the page.

JD, we already have our hardware designs done and an initial version of the web interface, so we feel confident in being able to deliver in the timeline that we indicated.

Thanks for the feedback. You have the option to change frequencies to avoid interference with other devices. We’re adding info about our spectrum use in our FAQ on the page.

It’s a question of how much you can change it. Which isn’t going to be much. You can change the channel, which is a good thing, because you can then send a clear message. But you can actually be in the next channel or two over and still cause interference if the signal is strong enough.

It’s like when you turn on your microwave and Netflix starts buffering. The microwave isn’t sending any traffic over the Wi-Fi channel, it’s just that there’s so much noise that it still causes bleedover interference.

Zigbee is a very low energy protocol. It can get drowned out by a lot of stuff. Just boosted 2.4 Wi-Fi will usually kill it. A lot of people with multiprotocol home automation set ups move as much Wi-Fi as they can to the 5 band just for that reason.

So, as Scott mentioned, we’ll just have to wait and see what the actual deployments turn up.

But I don’t think this is going to be an easy problem to solve. Or something as simple as a channel adjustment. I’d be delighted to be wrong, though. There’s no question we need a good micro location technology for home automation. So we’ll see.

Interesting tech. I’ve worked on location aware RSSI WLANs in the past, but this is cool stuff. @Joey couple of questions about the Xandem home units:

Thanks for the great questions. Here are some answers:

XANDEM HOME can integrate with any IP-based system via REST APIs. So yes, it should work well with SmartThings. XH has it’s own APIs that can be called as a URL, and it can also call URLs for other devices. For example, you can set up XH to call a particular SmartThings URL when motion is detected, and then that can cause SmartThings to react in the way you want. Etc.

Plug-level works great. Anywhere from 1-4 feet is ideal for the placement of XANDEM HOME nodes.

The antennas are omnidirectional, but don’t think of each node as a sensor by itself. It’s not. The mesh sensing web is the sensor, so even though the radio waves go out in a sphere pattern, they are only “caught” along the lines that head toward the other nodes. That’s what keeps the detection and tracking limited to within the house, so that trees and stuff on the outside don’t set it off. Does that make sense?

For now, if you want the tracking, each floor will require it’s own gateway+nodes. In the future a single gateway will be able to track on multiple floors, but the initial version will not have that feature. We do plan to push the software update out so that buyers can take advantage of this update later. Once the hardware is in place, we can push out updates to the interface to add features and bugfixes, and we will do so for free.

I’m not sure what you mean by monotonic degredation. But if you are talking about slow changes to the environment that affect the radio waves, like doors, furniture moving, etc, our calibration algorithms are very sophisticated and will not be bothered by these kinds of things.

Thanks again for the interest and let me know if you have any more questions.

Any news on Smartthing integration? I know they were planning on doing some early access units for developers.

Any update for Xandem integration with Smartthings ?