I have a smart sense sensor v1 will that work?

Yes, it works with any ST connected sensors.
Regards.

But it won’t measure temp in another room. That’s all I really want. Measure the temp in a few rooms to normalize the house (or that room).

Hi, look at the virtual thermostat app or a rule engine like SmartRules or Core for your specific requirements…

My smartapp calculates the avg temp from many sensors and adjusts the setpoints accordingly (just like the ecobee3’s follow me feature).

Thanks and I do understand. My point was that some rooms run colder/hotter then others, so an average of all rooms would not account for this. Would it be possible in your app (I paid for it) to have the ability to isolate to one sensor instead of using all sensors and the main ecobee device?

I understand that you contributed to my DTH (My Ecobee device).

If you want to use only certain temp sensors for your colder/hotter rooms at different times of the day, then you can use ecobeeSetZoneWithSchedule smartapp which can create virtual or physical zones (with smart vents) in your home. The avg calculation can then be done on your choice of temp sensors by creating a zone which can be enabled at certain times of the day.

To whom it may concern, My smartapps are now officially approved by Keen Home: [image] The new UI presentation amongst others adds a custom capability (setZoneSetpoint see image below). [MyZoneDevice_Custom_P1_C] [MyZoneDevice_Custom_P2_C] [MyZoneDevice_Custom_P3_C] Latest versions of the smartapps EcobeeSetZoneWithScheduleV9, ScheduleTstatV9, ScheduleRoomTempControlV5: new major version with added custom capability in MyVirtualZone DTH for Setting Zone setpoint under the new Samsung connect app! V8.8.9 EcobeeSetZoneWithSchedule & v8.8.9 ScheduleTstatZones added some defensive coding to avoid conflict when the master tstat is also included in rooms (as a slave tstat) for the scheduled zones v8.8.8 ecobeeSetZoneWithSchedule & v8.8.7 ScheduleTstatZones v8.8.7 - Removed some logic i…

You should look also look into smart vents.

EcobeeSetZoneWithSchedule is available at my store:

Thanks. Your apps are good but very detailed. Takes a while to get a handle on them.

So by using @yvesracine’s app, does the Ecobee3 lite have essentially the same functions as the Ecobee3? I need to buy two new thermostats for a new build and the $139 price tag on the lite’s is looking pretty good right now. Does anyone have an comments or suggestions on why the lite wouldn’t be sufficient? Cheers!

With the Lite, you’ll be dependent on ST. That’s probably fine. Yves’ software is good. But still. Future independence costs only $30 or so more. (If you buy more remote sensors, then it’s a little more. I bought two extra. Unless you have a very sophisticated house, you’ll probably have no need for more than 3 sensors. That’s all I have. Two would have been fine.)

You’ll also loose a lot of data on the Ecobee reports. You won’t have the follow me report. I guess that’s not a big deal. You’ll still have the general system and weather impact reports. Those are the most useful. If you want room by room reports to see how they are affecting the average, you’ll have to roll your own. That’s not so hard. It is a small minus though. . . . I’m not sure what the schedule report will look like. I think it will just indicate a long hold, as the software adjusts things using holds. Again, no big loss.

If you get the normal E3, then you have options. If you buy the lite, you have something nearly as limited as a Nest on its own. You can get a lot of power from Yves software either way. If you have the lite, you are stuck with ST + Yves to get much out of the product. That’s not so bad. But I would pay more for the option to ditch ST. I did, pay more, that is. I still have ST and use some of Yves software for changing modes. . . . 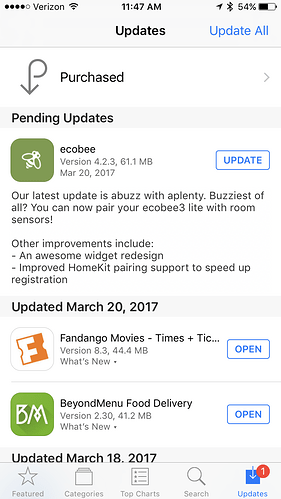 Same notes in the Android update. That’s pretty significant, as there is almost feature parity between the two now.

I found some comments interesting that the ecobee Facebook page has been posting. For instance, they posted links to the ecobee3 lite and saying things like “grab them before they’re gone”. Questions people asked were answered with things like “we only made a certain amount and they’re almost gone” and “stay tuned for updates”.

Sounds like maybe they’re prepping for a new product release, and the eb3 and eb3 lite feature differences will be easier to support long term is there’s not much difference between them at all.

Yes, there is an eb4 coming as I was asked to be part of the beta (but I was finally not selected at the end).

The target release date would be probably around October (the usual date for ecobee HW release).

It could also be released sooner…
Regards.

My zoned heating/cooling solutions (available at my store) can control whole fan or evaporative cooler switches based on an outdoor temp threshold or based on an internal humidity/temp table.

remote sensors are being unlocked in the Lite

I noticed that too. Anyone actually done this yet? I’d be game to buy a few sensors to go with my Lite except would like someone else to be a guinea pig first selfishly as they aren’t cheap.I only have 1 sensor that goes with my other unit so its already paired.

Check out CoRE by @ady624 This community app can just about do anything you can think of. Plus there is unparalleled forum support for it. …oh yeah, and it’s free.

Yes, Core is an option, but although Core is a powerful Rule Engine, there is no way that it can reproduce the logic in my zoned Heating/Cooling Solutions to orchestrate vents/whole fan/damper/ evaporative cooler switches, zone & room thermostats efficiently; all in one package.

there is no way that it can reproduce the logic

respectfully, you assume that your control logic is correct for all my friend.

, No need to translate all, just what is needed and in the case of @joel_eggenhuize who I responded to for weather and whole house fan… it’s a walk in the park. As I love quoting @JDRoberts Choice is good.

Now the big question is do I get 2 Ecobee 3 lite’s for my house or wait until EB4 is released. Unfortunately there is also no rebates in my state for thermostats.