Need some help with wiring a GE switch

I’ve now done a few GE and WEMO switches and all have been pretty straight forward. Even the 3 way switches were really easy to figure out. But I’ve run into one that’s a bit odd.

I went to add a GE smart switch for my garage lights and saw something I’ve not run into before. There are two switches in the box for two different circuits. The switch for the garage lights has a red wire and black wire connected to the copper contacts and a ground. This is the only switch for the garage so I was surprised to see the red wire. I went out to the garage and found that the bulb socket had the red and black wire connected to the brass connections and then a white neutral on the silver contact. I’m honestly not real sure how to wire this up. Any ideas?

I don’t want to say LMGTFY but close. There are plenty of topics on this topic already started here. Check it out:

I have been looking at all kinds of articles and videos on 3way wiring, but they don’t look the same as mine. It is for a patio light. One switch is in family room in a 3 gang box and the other is in the master bath. Now from everything I have seen, both boxes should have 2 14/4 coming into them. We’ll the m. Bath only has one 14/4. This is were I am getting stumped. Any help appreciated. Thanks, derek

Ok, so I thought I was pretty handy with a screwdriver and understood basic electrical wiring. I can’t for the life of me get the switches to work. It looks oh so straightforward. I watched https://www.youtube.com/watch?v=5OW_j_nV-V0&feature=em-share_video_user And followed his advice, but no luck. Attached is a diagram for how I am connecting. I am guessing it has to do with using the Neutral connection. But I am unclear what Neutral is, and why I may need it, so I didn’t try it. (apparently new users can’t attach images) Try this: https://creative.adobe.com/link/72353253-bee6-4bf2-9e09-c68fd5156e24

This is my first attempt to install a new GE 12729 dimmer switch; my smart home currently consists of a very robust SmartThings hub and 2 plug in switches! I purchased the dimmer switch to install in our kitchen; the circuit powers two overhead pendant lights, one over the sink and one over the island. Seems like a very simple swap with one single switch. The switch is in a 3 gang box, but each of the 3 switches is on a separate circuit, as one switch works the lights (the one I’m attempting to replace), one works the disposal and the other the dishwasher. I removed the cover and turned off the 3 breakers (Note: I write the breaker number on the inside/back of the switch plate for easy reference…try it!)… I confirmed each of the circuits were off, and I pulled out the switch in question.…

We might be able to provide some further help if you provided more specifics as I’m not really sure what you are actually talking about. You mentioned 2 switches, but then only talking about 1? You said garage lights and then bulb?

Anyway, I can make some assumptions so here goes:

Short answer, you really probably want a neutral (white) at the switch location but that isn’t always feasible. I know there are ways of doing it without one, but I have never had the need. Poke around the forums, like @Ben said and search for switches without neutrals. I’m guessing that it’d have to be an incandescent bulb though at the very least.

Sorry gentlemen, I know better and should have been much more clear. I’ll get pictures and a better description this evening.

What you’re describing sounds really typical for a 1960s or 1970 US double switch without a neutral.

Remember that in the United States, wire colors are not mandated code. People can and do use whatever bits of wire they have lying around.

Note that this is not a three-way switch. It’s not that both switches control the same device. Rather it said there are two devices on the same circuit, each with its own switch. Really commonly used for, say, a bathroom light and fan. In the garage you would sometimes see this set up for interior lights on one switch and exterior lights on the other. You also see it in utility closet that had one switch for an overhead light and another switch for some device in the closet, typically a water heater timer. You also sometimes saw this for pools, one switch for the lights and one for the pump.

I want to emphasize again that there is no neutral at the switchbox in these configurations. But there has to be a neutral someplace to return the current to the circuit box, and that most typically was done at the light fixture and the other device that is sharing the same circuit. Doesn’t really matter where it is, it just has to be somewhere.

Here is one diagram of this model. It’s a dual switch in a utility closet or basement, one switch controls a fan, the other switch controls the light. No neutral at the switchbox: the neutral is at the light fixture. 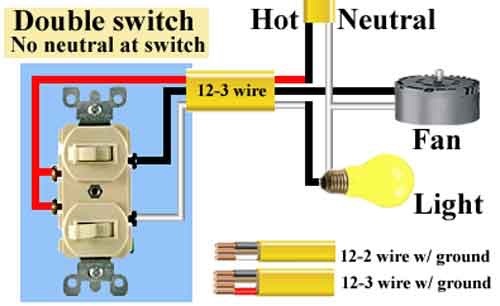 I can’t say for sure that this is what you’re seeing, but it sounds like it.

(All because electrician kits used to just have White, red, and black wire. In the 21st-century if we were designing national code to address wire colors we’d probably have eight different colors and use each one consistently. But in the United States we do not have required wire colors. So always tread carefully.)

Anyway just one possibility. You need to test all the lines to be sure. I know you said the second switch was a different circuit, which would make the wiring a little different, but the same model might apply as far as red in, black out, neutral at the fixture. (Having two different circuits in the same switchbox adds a whole bunch of wiring issues, and you don’t usually see it these days, but people did used to do it so you can run into it occasionally.)

Also, I know you’ve already looked at this but just for completeness while we’re adding other links, we should include the link to the wiring FAQ:

Thanks for all the information. I eventually figured it it after some reading and thinking. The red wire was load, black wire was line. There was a natural bundle in the dual gang box so I used that as well. The 3 way switch in the same box was installed without issue.

Now I’m on to the next fun one. This is a 3-way setup on either end of a hallway. The two switches control a single light fixture.

Switch 1: Two black wires, a red wire and ground. This switch sits in a dual gang box with another 1 way switch. There is a neutral bundle in the box.

Switch 2: This switch has two black wires, a red wire and a ground. It’s the only switch in a single gang box and there is no neutral.

I replaced switch one with a GE12724 Dimmer and it’s working fine.

I planned to replace switch 2 with a GE12723 auxiliary switch but there is no neutral and I believe it’s required. I tried it with just the red traveler and ground with the black wires ties together with a wire nut. That didn’t work. But, like I said the primary dimmer works. 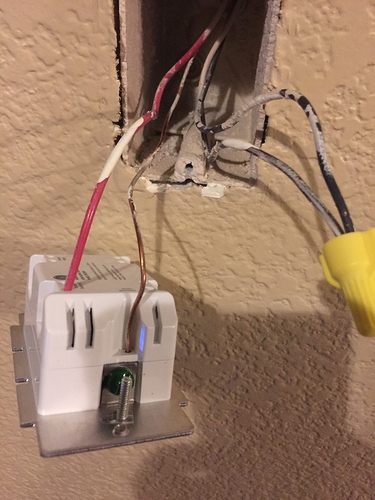 Is there any way to get around running a neutral to the box? Obviously it needs to be a safe option.

Before going on to the next set, though, can you verify whether in fact the two switches in one box from your previous question were two different circuits? Or were they controlling two devices on the same circuit?

Because if they were indeed two different circuits, stop now and call in a licensed electrician to check your wiring. Making those safe can be really tricky.