Need help with a Smart switch for 1500W power heaters

The thread title says Wi-Fi but most of the switches that work with SmartThings are not Wi-Fi, they are either zwave or zigbee.

Do you have a SmartThings hub, and if so, does the switch have to be Wi-Fi? It’s fine if it does, we just need to know in order to make device recommendations.

Sorry, that is my mistake, it can be any communication technology, as long as I can control it through my cell phone and Google home. I don’t have smart hub, I don’t mind buying one.

There are a couple of in wall modules that should work. One of the more popular is the Aeotec heavy duty micro. They make a number of different micro models, so check the specs on whichever one you’re considering.

You do need a zwave certified hub like SmartThings to control it, it won’t do anything on its own.

There are some other brands that will work too, but I’m tired tonight so hopefully other people will chime in.

I forgot to mention you can also use the quick browse lists in the community – created wiki, and look under project reports for the HVAC list, there are some similar project threads there that might be helpful.

Need some help with finding a way to control turning my 2x 240v 1500W wall heaters (dimplex TWH1531CW) on/off from my phone and Google home. Currently they are connected to a line voltage single pole thermostat (stelpro swt1) and a programmable 120v wall switch (not sure why the electrician used a few 120v switch). I would like to be able to change that switch or/and something behind it so that the hearers could be turned on/off with my phone and Google home - don’t really need to control temperature. A lot of the switches I looked at don’t do such high power, was wondering if there was something out there oraybe I could use something in between to handle the power.

Any help would be appreciated, thanks in advance.

The Sonoff TH 16A switch can certainly handle the load (IF it is single phase) and the voltage in your case. If you get model number of your thermostat I could tell you if it’s single or two phase. If you don’t mind a slight rework of the wall box you might look into changing out the thermostat wall box into a triple gang box. This way you could mount the Sonoff TH in the wall box, put the temp sensor on the wall plate. It comes with it’s on WiFi mobile app but it isn’t too hard to do some temp monitoring/control via SmartThings with some custom code by @erocm1231

We all have our own lenses.

Mine is fire safety, since I’m a wheelchair user. Unless things have changed, the sonoff devices are not UL listed. Some people won’t care, some will, but it’s good to know which decision you’re making.

Unless things have changed, the sonoff devices are not UL listed.

Good point. I don’t know if they are UL but they show IECEE certificate of compliance with the relevant IECEE standards which our UL is a member of and that is what UL assess products against is the IEC standards. UL issues IECEE certificates. Based on the worldwide map in the brochure it looks like in China they use a similar laboratory to test for meeting the same IECEE standard All that to say I really don’t know…

programmable 120v wall switch (not sure why the electrician used a few 120v switch). I would like to be able to change that switch or/and something behind it so that the hearers could be turned on/off with my phone and Google home - don’t really need to control temperature. A lot of the switches I looked at don’t do such high power, was wondering if there was something out there oraybe I could use something in between to handle the power.

You should have a look at this switch again and see what it’s use for. I don’t think it’s carrying the loads and more likely controlling the low voltage side of your thermostat.

Thanks for all the suggestions. Meant to reply sooner but been a bit busy past few days.

@JDRoberts - I might try the Aeotec heavy duty micro. Going to look around to see if there is a cheaper option before I do. Here in Canada those are pretty expensive.

@dalec - Those seem pretty interesting. I did read through the info at the link you posted. Is it really just as easy as flashing the firmware to get it to work with Smartthings or does it require more effort? Also is it capable of handling the 3000W and 240V? The thermometer model is stelpro swt1.

@Navat604 - How would I be able to tell if the switch is carrying load or just controlling the low voltage side of the thermostat? I guess if I opened the back of the switch and I saw that the wires connected to it weren’t the line voltage wires but some other ones that connect to the thermostat then that would tell me it’s just controlling low voltage? If that were the case then I could probably use other low power switches.

Also is it capable of handling the 3000W and 240V? The thermometer model is stelpro swt1.

So far so good! That Stelpro SWT1 model is a single pole. According to the National Electric Code heating circuits are considered a continuous load and therefore must be derated by 20%. (For example: a 20 Amp heating circuit cannot have more than 16 Amps of load connected.) In your case your heater is 3000W at 240V so that is 12.5 amps which bumps it up to a 20amp circuit breaker. The circuit at your house must be #12awg on a 20amp circuit breaker, correct? (FYI: Goodness, I just reread your original post and I totally missed you gave the part number of the thermostat

The Sonoff is rated at 16amp so I think you are good to go from that perspective. You still need to be able to mount it in an enclosure though because it won’t fit in a single gang box. You will need to change out the wall switch box to at least a double gang to put it in I would think.

[quote=“Bmank53, post:13, topic:79235”]
Is it really just as easy as flashing the firmware to get it to work with Smartthings or does it require more effort?
[/quote] Yes, it REALLY is that easy. Watch my video here which is a very similar procedure. The Sonoff is powered by the same powerful ESP8266 wifi controller chip. It seems a lot harder than it is when you read it the process.

Have a look behind the switch and see the wire gauge and where it’s going to. Possible it’s a 20Amp programmable switch as well.

Thanks, will check it out.

Hey @dalec, will the FTDI below work? What kind of jumper cable are you using to connect the FTDI to the Sonoff? 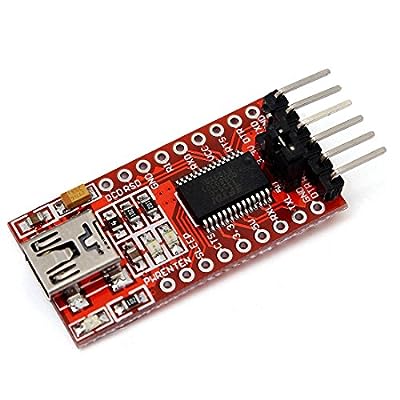 The Sonoff will come from the manufacturer ready to work with its own iOS software app for you to control your heater with. But if you want to connect to SmartThings then

will the FTDI below work? What kind of jumper cable are you using to connect the FTDI to the Sonoff?

Yes that FTDI will work (so you are in Canada?)

FYI: On this thread on post #360 I posted on How to flash the H801. In there you get links to the other things you will need like the flashing software as well as the jumper cables

Finally got all three H801 flashed and up and running! A HUGE thanks to @michaelahess for helping me get the flash process going. It really isn’t hard if you could see how all the cable connects are done. I ended up making a video to help out those like myself that have never worked with ESP firmware updates. I really needed something to hold my hand through the process so maybe this video will do that for someone else the way Michael did with me. (Firmware updating transfer starts around 7:00 in tutorial. ) Unbelievable awesome job @erocm1231 on the device handler and smartapps. So very impressive my friend!

The first video I posted before the tutorial above. It doesn’t show all the details of setup but was intended to show what the flashing looks like on your computer when you …

Thanks a bunch, that sounds like it is pretty easy to implement. I’ll go through that thread.

The only downside of this component is that getting my hands on the sonoff will take a month or so on ebay or dhgate. Amazon.ca has them for over double the price. Might be worth grabbing them from the US.

I’ll let you know how it goes when I put it together.

@dalec - One thing I was just thinking about was whether or not I would be able to still use the physical switch to control the heaters manually. Would this still be possible with the Sonoff? I’m not sure how that would work…

One thing I was just thinking about was whether or not I would be able to still use the physical switch to control the heaters manually. Would this still be possible with the Sonoff?

I don’t see a problem unless the switch is cutting the 120V power to the Sonoff. Where is the switch physically now in relationship to the existing Stelpro SWT1? Basically the Sonoff will be replacing the NO contact of the Stelpro and isn’t going to be messing around with anything else. If you have a picture post it of the setup you currently have.

Are you planning to install a temp sensor to the Sonoff for doing SmartThings temperature control or is there one already on ST for you to control from?