Hi everyone! I have a device in my SmartThings network called “Mystery Device”(I named it this) but it says that it’s On, yet I have no idea where or what it is. Does anyone have any tactics or techniques to figure out what devices are? I can see it in the API and the only halfway discerning information is: " * networkSecurityLevel: ZWAVE_LEGACY_NON_SECURE" but still doesn’t tell me much about it.

I’m not sure what it is or how to diagnose if I even need it.

Login with your Samsung Account that you use in SmartThings. Then go to My Devices, and from there, click on your ‘mystery device’ and see what the IDE tells you about it.

There may be some info under states or Data that might help identify what it is.

Yes, I just listed in my original post what was under the Data section.
Under the states it lists:
switch:
level:

If it says “Level” in there, does that mean the device has some sort of switching feature based on the device being level?

It seems the device is or was Z-Wave based, and at some stage has crossed paths with a device handler for a dimmer switch, though seemingly not with much success. Apart from that there isn’t much to go on, and if it is real there really ought to be a bit more

If it says “Level” in there, does that mean the device has some sort of switching feature based on the device being level?

A switch level device in zwave is a dimmer. Also called a multilevel device. The level is the brightness level.

A regular switch which just does on/off is called a binary switch.

Here is the rest of the page. I am wondering if it’s somehow been used with a Custom Handler while I was trying to add something else? This has been in my system for a while, never had a clue what it was. 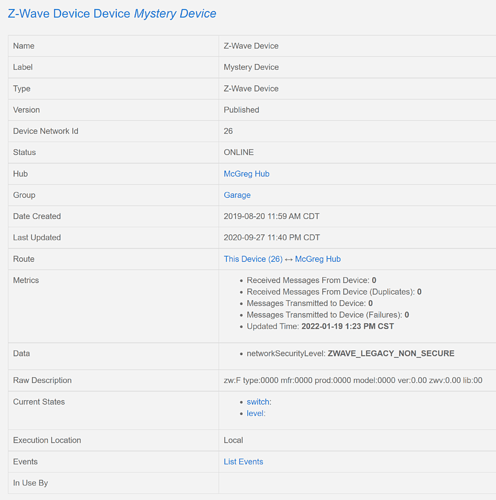 It’s not a real device, there are no messages in either direction. Not even any failed transmissions. It’s just left over from a failed pairing. Or a botched manual add. I would just delete it.

Agreed. The fingerprint is completely hosed. Whatever it is wouldnt work anyway.

Although - delete ot from the mobile app not the IDE. To prevent unintentionally causing a ZWave Ghost.

Trying to delete from the app, then letting it time out, then trying to Force Delete it did not work. It’s just spinning on the “Deleting Device” after clicking Force Delete and nothing is happening

Disregard, it FINALLY deleted after 5 minutes or so. I thought I’ve done this in the past and it re-appeared but if so, I will post back and advise. Thank you