My solution for Reliable SmartThings 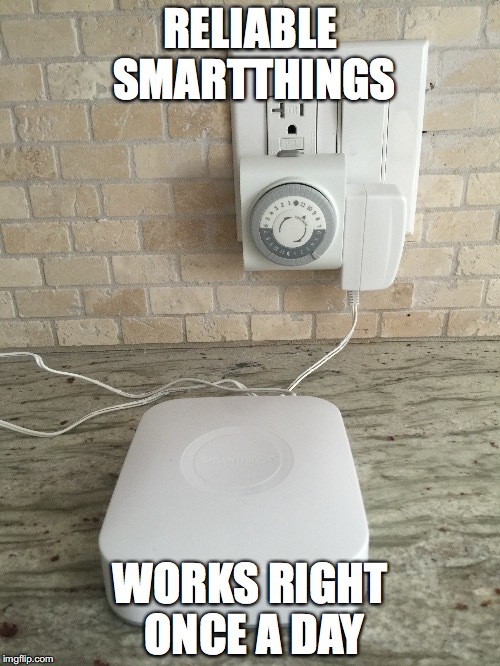 Pulls power once a day, batteries are already removed.

I’m not used to this dismal level of reliability. It works in the morning, but by the end of the day, it has stopped working and transmitting to Z-Wave devices!

Pulls power once a day

If only one could do the same with the cloud.

I don’t seem to ever have to reboot my hub. I wonder, I have it plugged into a filtered/stable power source instead of just the wall outlet. I wonder if that could make a difference?

I’ve other devices that stay on perfectly well at the same time and don’t need filtered/stable power source. Electric supply is stable here. This morning, I took a look at Amazon reviews for Smart things, 25% of them give it 1 star. The forums here are littered with unhappy users with all kinds of reliability issues.

Seems like most of the issues in the community here are related to scheduling or periodic types of things and integrations which also rely upon periodic types of activities. There haven’t been a lot of threads about loosing z-wave connectivity - that’s a hub to device level activity. Much different than a cloud level activity. If you are seeing local level loss of communication from z-wave devices that should be talking directly to each other and it isn’t interference-level, range, or environment-types of things, maybe it is due to something different. Assuming that there isn’t a periodic change in interference - you are saying that it starts failing later in the day and a reboot of the hub prevents it then PERHAPS a guess as to electrical stability MAY be a possibility. It is a guess. May very well be incorrect, but there isn’t a lot of data provided.

I don’t have any integrated devices - other than a Nest - but I don’t think a reboot of the hub would help with my Nest integration and would quite likely be ineffective with a lot of the other integration scenarios. Again, no real data on my end on this just an uneducated guess/opinion.

If the hunch helps, great, if not, sorry, gave it a shot.

If the problem was radio interference, then I would expect a reboot of the hub to have no effect. It should not work after a reboot when it failed to work before. The instability has got worse since I bought the device. Initially it could work for 2 weeks, then it got progressively worse.

My issues may be cloud related (or hub 2 cloud connectivity). The triggers that aren’t working are presence based (Phone Home/Away) or controlled through iPhone App. Looking at the current SmartThings website Status, I’m seeing system wide problems.

This, along with a hub update seems to indicate that there are a lot of issues (being closed?) currently!

Though, I agree with your thought about radio interference issues, and wonder if their code to recover from lost connectivity isn’t FUBAR. This would explain the inconsistent nature of the failures. Ensuring your Embedded System recovers gracefully from failure is a tough challenge.

I believe ST are going through a phase transition on the back end since they have been acquired by Samsung.

After moving the ST Hub closer (no repeaters?) to the devices I want to control, I’m no longer having to reboot the hub on a daily basis. The Z-Wave transmit failures might have been related to RF interference and recovery - the ST hub doesn’t seem to recover if there is a repeater in the mix.