I really like the schlage products, but before I purchase one for $200 I wanted to ask if there any recommendations for more affordable options.

I think it is good product.

depending on how close you are to northern NJ, that schlage lock may be as low as $140 (use lowes price checker to find). i have two and they’ve worked really well.

monoprice has a z-wave lock for less than $120 http://www.monoprice.com/product?p_id=10798 but i cannot speak to its reliability, functionality, etc.

Yale locks are highly recommended as well. After reading several reviews and opinions, I went with a Yale lock and I love it.

Regardless of which lock you choose rboy makes some good apps for controlling it.
Rboy has a free one that you can use for basic setting of pins, or you can pay for more advanced apps. (which I have not tried yet)

I would agree, Schlage and Yale are the best locks (most stable and good battery life) out there. I would tend to lean towards Yale a little more, appears to have better battery life and fewer bugs. The FE599 has a firmware bug that hits a few users. The BE469 is a VERY competent lock if you want an integrated alarm. If not the YRD240 is an excellent choice. I like that Yale allows for flexible user code lengths for each user and with the 240 you can connect an external battery to temporarily power the lock if the internal battery dies (so you aren’t locked out but you don’t need to keep a key either)

Wow this lock looks great and affordable. Are you able to have the lock trigger auto Lock/Unlock? For example When you are at work?

I’ll have to look into rboy apps. I had thought about trying to write my own, but if there are some out there I’ll use them.

Are you able to have the lock trigger auto Lock/Unlock? For example When you are at work?

Yes, you could, not to say whether you should or not.

The BE469 is a VERY competent lock if you want an integrated alarm. If not the YRD240 is an excellent choice.

What happens if the internet at your home is down? Assuming you have batteries in your ST hub, will the lock work?

When the internet is down, Smarthings is having cloud issues, or power is out (unless you internet and hub are still up)

The codes are stored in the lock. So, manually entered codes to unlock the door will still work (along with the key).

But, any remote programming of the lock won’t work. This includes any “schedules” Which is why I’m hesitant to utilize a very cool sounding feature (have a code for the cleaner that will work between times X and Y)

Yep that’s true so here’s a very simple and relatively cheap fix. If you have the v2 hub it has a battery backup. I’m still on v1 for stability reasons.
At my house, I bought a cheap UPS for about 50 bucks, hooked up the modem, router and v1 hub to it. I get about 4-5 hours of backup time on it, more than enough for any power outage. Works like a charm!

Any lock with a touchscreen will typically cost about $50 more then a Lock with just pushbuttons. Regardless of brand. So you can save some money that way.

Both Schlage and Yale are good locks. Yale is a little bit quieter, but also a little bit slower. (I don’t know if that’s a coincidence or not.) Schlage comes in more colors.

If you get one with a touchscreen, the Yale has a true capacitive screen (like a smart phone) and the Schlage has the older kind of touch screen technology where you actually have to press down on the screen. Most people won’t care, but it does make a difference to some people.

Yale gives you more options in the length of the lock code, and also has more choices for the autolock feature. Some people will care about that, some won’t.

The Schlage turnbolt on the interior of the door is a little bit easier to turn physically.

The Yale is a bit more finicky about jams, so many people find they have to hollow out the pocket in the door frame a little bit to make sure that the yale doesn’t touch the sides as it moves in and out. The Schlage just doesn’t care as much. So you get more reports from the yale that the lock is jammed when in fact it isn’t – – Yale support just recommends hollowing out the pocket a little more.

So pros and cons for both.

The least expensive zwave lock that I know of that works with SmartThings is the Monoprice “no label” lock. But it’s cheaply made, and personally, I’d spend the extra money and get a Schlage instead. 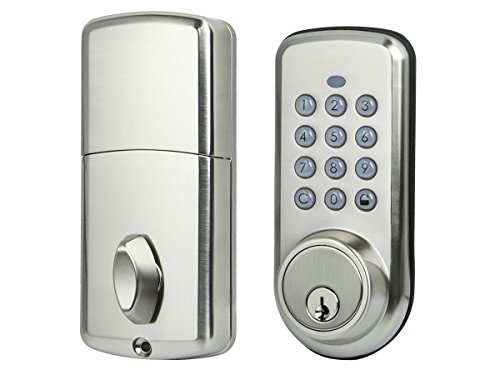 I have had 2 of the Schlage ZW touchscreen locks for going on 3 years and can not complain about them at all. Well I did a lot of complaining when I had them on Wink hub and Almond+. Batteries on the one we use 50 times a day still last about a year. With the app above I can add/delete , turn on/off codes from anywhere.
Before I spent $200 on one I agree with others to check around. They can be found regularly in the $150 and lower range. It might just be me, but I am not going to use a generic lock. If it doesn’t say Schlage/Kwikset etc I am not going to rely on it .

So if I understand correctly, these features are possible with the Yale device you shared, but you’re not recommending them due to service issues with ST or wifi reliability. I can understand that. I essentially want to ability to be able to lock/unlock remotely if I’ve got someone coming over and I’m not home. Or, for example, give the “key” to each member of the household (3 of us) so the lock can be unlocked/locked via smartphone. The scheduling is enticing, but I may hold off on that until the service gets a bit more solid.

You would have to be really unfortunate to have a ST or internet issue at the exact moment you are trying to open the door. In that case the locks still have the physical keypad to get in. Every member of the house can have their own 4-6 digit ( all need to be the same length) code that they type into the lock. I use the other community enhanced lock manager and get a push notification and text alert telling me who just opened the door. If I need to allow a contractor or somebody in it is a matter of 5 seconds to add & activate a temporary code for them to use.

( all need to be the same length)

As Rboy mentioned, they don’t have to be with Yale locks.

So if I understand correctly, these features are possible with the Yale device you shared, but you’re not recommending them due to service issues with ST or wifi reliability.

It really just depends on what feature you are referring to, and your personally preference. I don’t personally recommend the “presence activated” lock states just because of “What ifs”. IE if you forget your phone at home, the door unlocks.

Locking while you are at work seems like a good enough backup to locking your door when you leave, if you are the only one that lives at your house. For me, this could cause problems because the door may lock while other family members are entering or exiting the house.

I originally wanted to set a schedule for the house keeper where the code would only work between 8-5. But the risk of smartthings going down and her being locked out is too much. I’ll revisit it when smarthings has been proven more stable, but for now I settle for a notification when that code is used. I may just be overly cautious on this, take a look at the history of status.smarthings.com and you can decide if the risk is worth it for you.

That said, I think the lock is one of the most useful things to be “smart”. Even my wife who generally thinks of Home Automation as a toy, thinks the lock is useful.

Once I get some smart switches I may have some of the lights turn on when the door is unlocked.

The kids love it because they can unlock the door without our help.

Took my 5 yr old granddaughter seeing me open the door 2 times before we got home and she ran up to the house and entered my code, had the door open before I got there. She was soooooo proud of herself

We use the autolock feature at our house where the lock automatically locks itself after having been unlocked. So if someone left their phone at home it wouldn’t be a problem, the door will still lock itself after they’ve gone through it. This means that our house the door is always locked except when someone has just transited.

We did this because of the particular “what if’s” at our house, which are admittedly different than at most people’s.

I am quadriparetic (use a wheelchair and have limited hand function). Normally my service dog opens doors for me. But I didn’t want him to be able to let himself out of the front door! So we have a smart lock on the door which requires a human to trigger the deadbolt to Unlock. The dog can then work the handle to physically open the door.

I have two housemates and there are a number of people coming and going. So I didn’t want to have to worry about people remembering to lock the deadbolt every time they went through. That’s why we got a lock with an autolock feature. This way the door locks itself every time and I don’t have to worry about reminding people.

So some of the “what if’s” can be handled with various features on the lock So long as you’ve bought the right model.

Most geopresence is based on arrival/departure events rather than actually knowing that you are “there.” So the lock doesn’t keep unlocking itself all day long if you left your phone at home. There’s just the one event as you cross the border of the region. And as I said, at our house the autolock takes care of what comes after that.

Thank you all for the suggestions and advice. I think I’m going to go with the Yale lock @John_Luikart shared. It’s affordability and function the primary deciders (aesthetics aren’t #1 for me at this point, but it won’t look bad at all).

Thank you for the precautions about scheduling and such. It definitely made me re-think some of my plans. I think I’ll start with just providing each housemate with a code and showing them how to lock/unlock remotely from the ST app and having it auto-lock when I leave house. It will also be nice to have if I’ve got friends/family coming to visit and I can quickly unlock the door for them and ensure it’s locked again quickly.

If you have housemates, you should definitely look into SmartTiles. It’s a third-party dashboard that will run in any browser. It has the advantage that you can customize it so that it shows only the devices you want to show. And it means you’re not giving admin level access to your SmartThings account to someone that you just want to have the ability to control a few devices. Very popular in the community.