Has anyone had issues with this device reporting motion has stopped far too often?

I use one in my office, it is mounted on the wall, about 7’ high, right behind my desk. Maybe 10’ away from my desk. It will detect motion when I walk into my office as expected, and then will typically report no motion about 10 minutes later (which is what I have set for the Inactive Timeout, I’m using the RBoy Device Handler for this device). I have a sit/stand desk, and am usually standing. I don’t really stand still ever, and even when I’m sitting, I tend to fidget quite a bit. I have the sensitivity cranked all the way up on the device. It’s rather irritating, I’ve had to disable my automations that were using the motion sensor because I got sick of lights and things turning off all the time. Does anyone have tips for getting better results out of this? Should I just throw the damn thing away? Is there a better sensor that does motion and temperature (at a minimum)?

I wonder if you happen to be standing in a dead spot.

I’d change the angle of the sensor 10-20 degrees and see. If it was frequent enough then I’d use another sensor in a different location. Why not stick it on the desk where it cannot miss?

This manual seems excellent and it shows the coverage in about 120degree arc but it is not 100% within that area, depending on your distance. 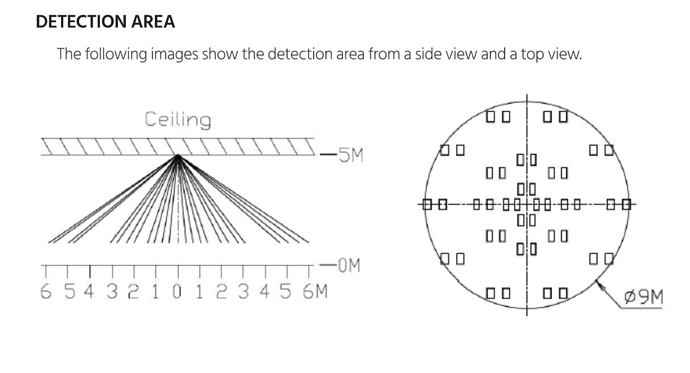 I wonder if you happen to be standing in a dead spot.

Anything is possible, I guess, but I doubt it. I stand just a bit off dead center from the sensor.

I’d change the angle of the sensor 10-20 degrees and see. If it was frequent enough then I’d use another sensor in a different location.

I’ll try moving the sensor and see, but I’d be very surprised if that fixed it. Guess it’s a good thing I bought a pack of command strips.

Why not stick it on the desk where it cannot miss?

The biggest reason would be because I bought a desk that isn’t big enough for my work use, so it’s already too cluttered as it is

At one point, I had it on the wall right above my desk, but it would pick up motion in the hallway outside my office if I forgot to shut the door and the dog would come wandering through the area. Plus I found that if I stood off to the side of my desk, it would stop picking me up. So I moved it to the opposite wall, next to the door instead.

Thanks for the detection area chart. It’s definitely food for thought but it suggests the sensor should be ideally positioned relative to my desk.

Moving the sensor didn’t make any real difference. It still seems to ping-pong between motion and no motion very frequently. I worked around it somewhat by moving my lighting rule into webCoRE and adding a timeout before shutting the lights off since the Smart Lighting app doesn’t have that ability (well, it sort of does but it shows up as “Beta” and doesn’t seem to work reliably when I try to use it).