It’s a zigbee 3.0 device which works with the hue bridge and is set up through the Hue app.

Amazon has it listed at $40 for pre-order, shipping next month. Nice video on that page as well. 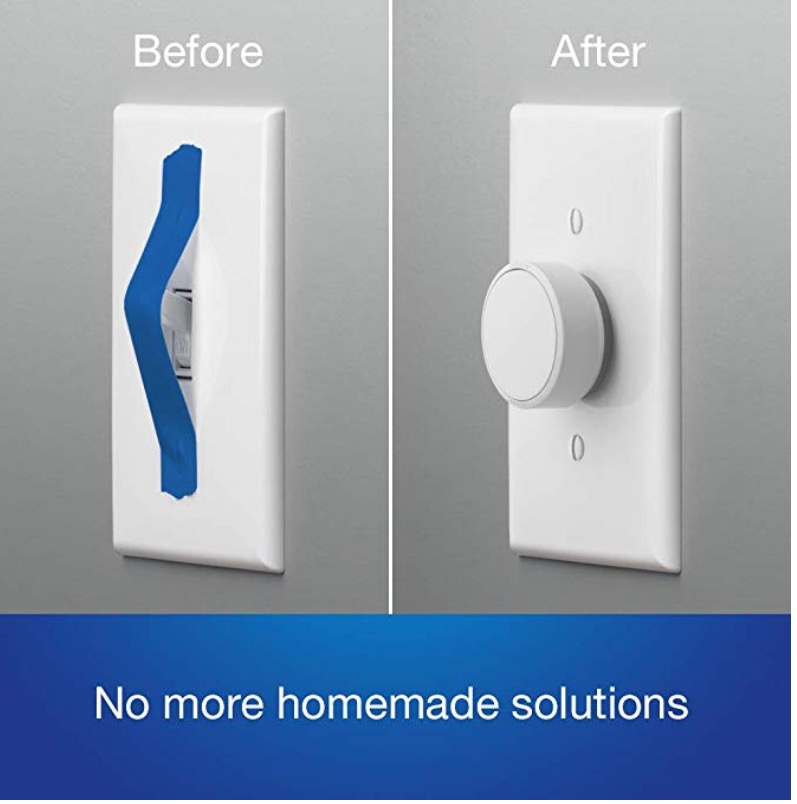 Not sure if this will be visible to HomeKit or not.

It’s possible that like the Illumra “Friends of hue“ switches it will work with smartthings if you are on the right zigbee channel and you have a hub that supports is zigbee 3.0. But no telling yet.

I guess this is what Lutron’s zigbee engineers have been working on since they discontinued the Lutron connected bulb remote (LCBR).

Note that this will only work with a toggle switch underneath, so you might have to replace an existing dumb rocker with a new dumb toggle switch, but those only cost a couple of bucks.

Wonder if this will work with SmartThings’ default zigbee remote dimmer handler?

And can I say once again that Lutron knocks it out of the park in terms of UI when it comes to the competition for lighting controls.

This is how Sylvania solved the same use case: 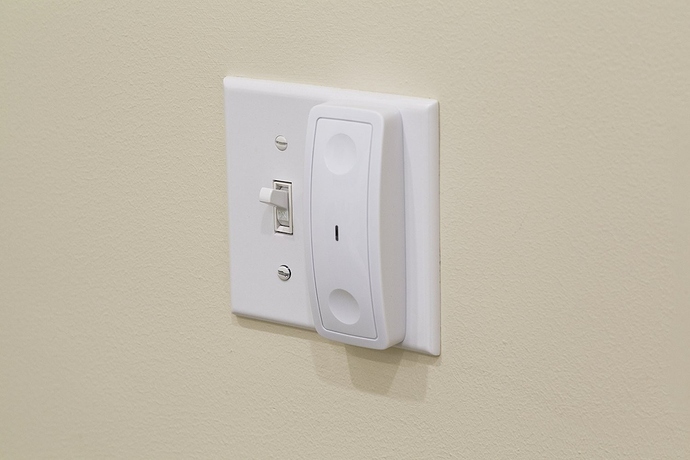 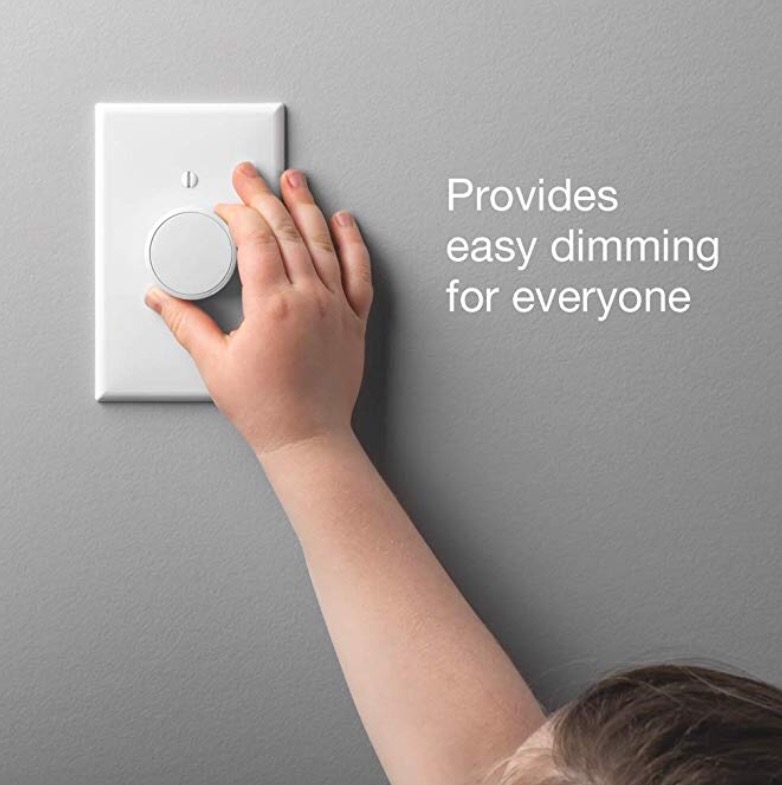 I believe it uses a coin battery. I can’t find an authoritative source for this but all the tech blogs reporting on this say so

It uses a coin battery. From the Amazon product description:

Lutron says the battery will typically last three years. There’s a small red LED which will light up when the battery is low, intended to give you about a week to change it. And you can change the battery just by popping the knob on and off, you don’t need a screwdriver for that part.

Now announced with a release/shipping date of July 1. A few places are taking pre-orders, although some, like Amazon, are listing a ship date of July 15 .

Also the price has come down from the first announcement, it looks like everybody has it at $39.99 now instead of $50.

We’ve ordered one because it should solve one of the last issues we have which is that one of our housemates still turns off the switch for the vanity lights in the second bathroom, which is really annoying because that hallway is not wheelchair accessible. That’s even though there’s a child lock on that switch and a hue dimmer on the wall next to it.

But this will solve that problem permanently.

Just got my pre-order in the mail today! I don’t use SmartThings for Zigbee or Z-Wave anymore, but I did manage to get it paired to Hubitat. I imagine it would also pair to SmartThings. On Hubitat, no existing driver (DTH in the SmartThings world) will work with it, but the fact that it pairs is at least promising. I imagine it could pair and work on either ST or Hubitat with the right driver/handler. More to come as I experiment.

I would try contacting Lutron support, they are usually very good. They have live chat and phone support.

Look at the bottom of the following page and choose the “customer assistance“ tab.“

Also, just to be sure, you do have a V2 hue bridge, right? Not V1? That is, square, not round. It doesn’t work with the first generation bridge.

My experience says “no.”

(And not sure if you saw this, but despite the fact that DTH mentinons “Aurora,” that is the name of a company who makes a different product that this DTH was apparently written to include.)

With the stock DTHs, it joins as a Thing (so no fingerprint matches). I haven’t tried on ST, but on Hubitat it’s similar, and I’m able to get it to work with a custom driver (DTH in ST land) that I threw together. Unfortunately, the device doesn’t seem to work like I’d want, which ideally would be something like a button/scene device that sends different events for left and right turns or perhaps and event when a turn starts and a turn stops or different events for different turn speeds. Instead, it seems to remember a built-in level from 0-254, then turning the knob continually sends that level back to the hub. Pressing the button also sends an event. That’s the most usable part of the device; the other seems like it might be workable if you “bind” it to a real dimmer, though maybe it’s possible to send a command to the device to set its level should you adjust the device instead of the dimmer (I don’t know enough about Zigbee to know if this works). As-is, I think it’s a little odd. A Zigbee expert will undoubtedly create a better driver/DTH, however, so I’m sure the device is capable of working a little better with someone who knows what they’re doing.

They can also be paired directly to bulbs. The manual, unsurprisingly, only mentions pairing directly to a bulb or pairing to a Hue network that contains a Hue Bridge. Since ZLL is supposed to fall back to ZHA, I’m assuming that’s why this still pairs to ST and Hubitat, so hopefully it can be made to work in some capacity.

It’s most similar to the IKEA Tradfri puck, Which does have an official integration, so you might start by looking at that DTH. But the mechanics are different because the Lutron device has a press which the IKEA does not, so there would definitely be customization required.

@Automated_House , as @BertABCD1234 indicated the “Aurora“ in the zigbee dimmer DTH is referring to a UK company and their “Aurora AOne” dimmer switch. Not the US-based Lutron “Aurora Always Ready Dimmer,” which is, as noted, not actually a dimmer at all as far a zigbee is concerned, but rather a controller.

yeah, i’m aware of the Aurora brand vs Aurora model by Lutron. As you pointed out, I thought it would be similar to the Ikea dimmer puck. That DTH (zigbee battery accessory dimmer) uses a lot of device-specific code for the Centralite and Ikea remote that it supports, but it may be good as a starting point. It supports the same capabilities as a dimmer switch, so something like Smart Lights mirroring would need to be used to control a bulb through SmartThings.

It supports the same capabilities as a dimmer switch, so something like Smart Lights mirroring would need to be used to control a bulb through SmartThings.

Yep, this is the weirdest part to me. It would be so much more flexible on ST/Hubitat if it were a regular button controller device, but instead it insists on behaving like a dimmer and “remembering” its level (0-254) and sending that to the hub based on turns, so “mirroring” with Smart Lights would be the best way to keep that in sync with the “real” device and make it usable. (In this regard, the device itself does act like a dimmer, despite the fact that it is not really one in that it does not directly control a load.)

I guess this (on a ZLL network, at least) is more or less how it was intended to be used, so it’s not too surprising, but it would definitely be more flexible if it acted like a regular button device (e.g., like the Hue Dimmer).

There are two different device classes for devices which cover an existing switch.

One group physically moves the dumb switch underneath. So those are good for making a dumb switch smart. But not good for using with smart bulbs. These include the zigbee 3rd reality and the zwave Ecolink models. ( and the switchmate, but that one doesn’t have a SmartThings integration)

The other group leaves the dumb switch underneath fixed in place, typically on power, and then itself sends messages to the hub or to smart bulbs. These are great for use with smart bulbs. This includes both the Lutron Aurora which this thread is about, the very popular Sylvania dimmer, and the now inexpensive go link zwave device.

So depends on what you were looking for.

I’m just using mine with the hue bridge, and I’m very happy with it. I’ve ordered another one for a different room. But I’m using it as a parallel means of control for some other devices on the same hue bridge, I don’t need smartthings in the picture.

Pure sengled, unfortunately. The GoControls are working but these lutrons are much easier on the eyes.