Local and not local

Any idea why an Ikea motion sensor routine to turn on lights based on motion is run locally, but a routine using the same sensor and lights to turn them off based on no motion is not local?
Both routines are only triggered by the motion sensor and have no other conditions

try editing the one routine that is not local, add a space after the routine name and Save. see if it changes to Local

We would need to see the complete routine, but my guess would be that there is a timer/duration of some kind in the turn off routine. Some of those will not run local even if the device is eligible to run local.

The solution that @jkp is definitely the first thing to try. However vif that doesn’t work the what @JDRoberts said will be the next thing to investigate. You will need to provide a full screen shot of the automation to determine if something else is causing the automation from running locally.

Ok, I tried adding the space, made no difference.
Here are the two routines.
The one marked local has the home symbol beside it, the other one does not.
@JDRoberts @jkp 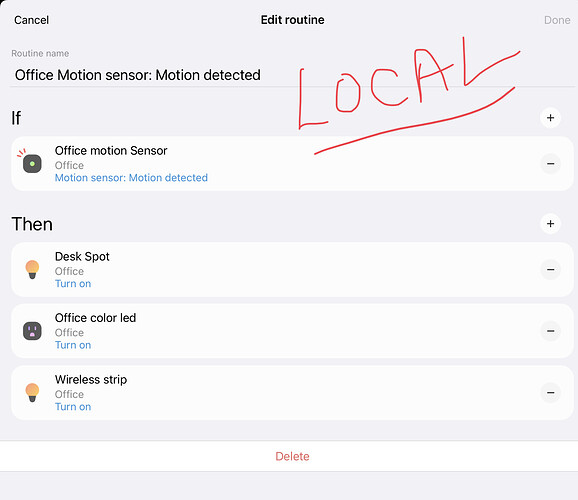 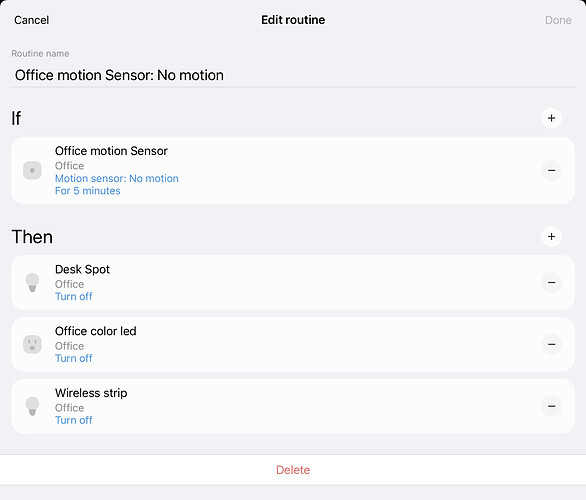 you put it there for 5 minutes. When she has this condition she is not local

The official explanation is that they haven’t finished moving all features from the cloud to local yet, but they aren’t promising exactly which features will be in the finished product. But right now, it’s not timers.

It doesn’t. It does, however, need the code to handle ‘remains’ to have been implemented in the hub firmware. Or alternatively if the routine was written using the older ‘remainsEqual’ and that is to be superceded (all I know is that ‘remains’ has been documented and ‘remainsEqual’ hasn’t) it may need the Routines to be tweaked to generate different code. Or both.

I’ve noticed that often when I edit routines now, they often end up being local when I’m done. So I went through many of my local devices that are triggered only by time and it appears that simply making and undoing an edit prompts a save, which then appears to make it local execution. Sounds like your approach is doing the same thing. I’m curious what other actions can be “moved” to local?

Oddly enough, in my motion detected rule I have it set to turn off the light(s) after 5 minutes.
That rule is listed as having local execution.