Need some help - I have a Linear WT00Z-1 accessory switch that was working fine as a 3-way switch to turn my basement lights on and off using the Smart Lights App. I then added a ZWN-SC7 button controller to create and control scenes with my basement lights (works fine). Now, however, the accessory switch only occasionally works to turn the lights on and off. I’ve deleted and re-installed the devices and apps a couple of times.

I am setting up a new house with all Linear switches and was wondering how you paired the Accessory switch in the SmartThings app.

Also, is there a way to have the Accessory Switch trigger a Routine?

Also, is there a way to have the Accessory Switch trigger a Routine?

Sure, it’s just a switch to SmartThings. There’s a smartapp in the marketplace section of the mobile app which is designed to tie switch to a routine. It’s very popular. It’s been around for a long time, so long that uses the original terminology of “home phrase” instead of “routine” but they mean the same thing. It’s under lights and switches in the smart apps section of the marketplace. 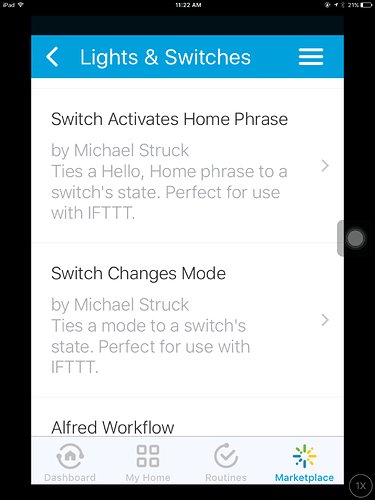 Well, it looks like I am a little dense. I found the SmartApp and added it, however it never shows up in the ST app so I can’t select it.

Since it’s officially published smartapp, you can ask support for help.

Meanwhile, are you sure your mobile app and the IDE were looking at the same location?

Also you may need to be logged in as your primary user/device. I have two devices with two different emails. The managed or invited user account does not seem to show the “My Apps” category in the market place. I have to log on with my primary account. Once added the apps show up for all accounts.