So, I received the ST kit for xmass and I would like to add the GE zwave light switch to my master bedroom. After reviewing some videos, I believe I know how to do it. I turned off the breaker in that bedroom and opened the switch to verify if I have a neutral. I do… but now the mystery. I have a 3 bedroom home. Each bedroom has a duplex light switch by the door entrance. One of those light switches turns the overhead light in the room on and off. The second switch as far as I can tell does nothing. In each of the rooms, I’ve plugged a light into each electrical outlet in the room to see if it controls the power but it does not. I have lived in this house for almost 10 years and I have never figured out what that second light switch does in the bedrooms. Today when I opened the faceplate to look inside to check for a neutral wire, I noticed that the second switch is wired and also there is a wire from the master light switch to the second light switch that does nothing for me. In the picture you can see this. The switch on the left turns the overhead light on and off (no dimming) and the second light switch does nothing. 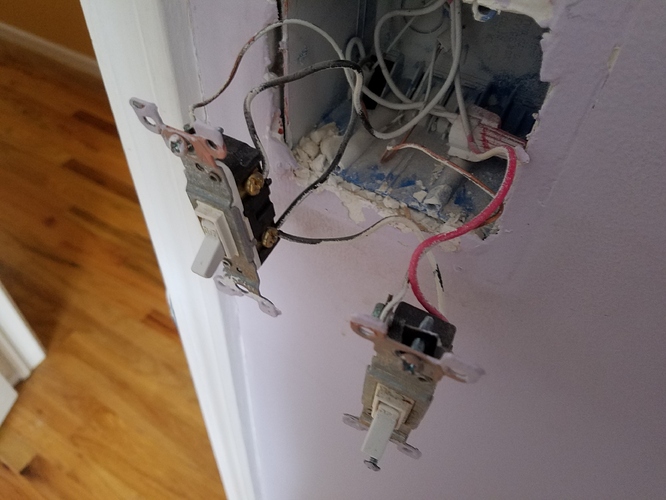 I suspect you have pre-wiring for a ceiling fan. In other words, the switch that currently does nothing is there if you add a ceiling fan so you can control the light on the fan and fan separately from the wall.

That’s probably a fan/light combo wiring as mentioned by @Nezmo. You can see a single romex with red, black and neutral going to to your light fixture.

I have a similar wiring setup. Only the master bedroom was prewired for a fan, the other rooms, the “mystery switch” controlled one half of an outlet somewhere in the room, presumably for a floor lamp. I would try plugging lights into all off your outlets in the room, and flipping the switch. If everything stays on, it is fan wiring!

I have EXACTLY the same setup in all my bedrooms. I did EXACTLY the same “light test” that you did when we finally moved in. I suspected what @Nezmo did, it’s more than likely a ceiling fan pre-wire.

Only one of my bedrooms was properly wired with separate fan and light switches. The others either don’t have ceiling fans or they are both wired to one switch.

As far as I know, addon switches won’t work in this scenario. It doesn’t make sense that it would be a 3-way setup in the same box. You will probably need 2 stand-alone (single pole) switches.

I’m far away from an electrician but the wire coming from the first switch to the second is the “hot” wire and shouldn’t have an impact on how they work individually. You could connect the hot with two other wires and run those two new ones to the switches instead of jumping from one to the other, if I’m not mistaken.

wow… it never occurred to me that the second switch could a pre-wire for a fan. That makes a lot of sense now.

Thanks guys for the quick response!