King on the hill: Who makes the most accurate temp sensor

As winter is apon us, I fiquired January would be the perfect time to test various temp sensors to see who is the most accurate as compared to a mercury based thermometer.

If you have a sensor that you would like to be apart of the test and are willing to ship it to me in Austin,TX feel free to PM me to discuss details.

I’d like to have the testing complete, devices returned to their respective owners and winners/results announced by mid February.

May the best sensor win!

Do you have any of the new Iris contact sensors with Temp?

I have 4, but none I can send down to you right now.

3 Iris sensors have been added… I know from the from the forum posts that more than just 2 people consider this to be important. Anyone else want to get their sensor in for consideration for the price of shipping?

I’d be interested to see the Everspring ST814 and Monoprice motion/temp sensors. I don’t have a spare ST814 to send but could probably spare one of the Monoprice devices since I bought a few in the recent sale and don’t necessarily need them all right now. I’m curious though - do the components and manufacturing processes for these types of devices allow for the testing of one to be valid for all or most others?

This will be interesting to watch! Temp Sensors were important to me as I researched over 15 from the same and different manufacturers. I bought laboratory quality Thermometers to use as the base line tempertures. I found that no matter who manufactured them they could vary by as much as 15 degrees from the same manufacturer. I also found that even though most could be adjusted to calibrate them to an accurate temperature that they could be very inaccurate as the temps changed. I also found that some of them would function way out of their published operating range. One that I use for reference only is the Aeotec Gen 5 Multisensor which is supposed to operate down to 14°F. This morning it showed my OAT (Outside Air Temperature) outside my garage side door at 0°F. I installed 7 other sensors in and around my Water Filter Alcove and others elsewhere in my house in case my furnace fails that I use to turn on my Aux Oil Filled Radiator Heaters. If you only want a reference temp then even though they might be 10 or more degrees away from the actual temp most people would be happy with them. One thing that most are not aware of is that the maximum expansion of water happens at 39.2°F, not 32°F. This 39.2°F is what destroys plumbing. Why did I spend over 2 years investigating temperature sensors? Every year the OAT at my primary house up at 8,000’ up in the San Juan Range of the Rocky Mountains gets down to minus 25°F. I had hoped to control my house inside air temperatures but that dream was shattered by the failure of my SmartThings last week and even though I managed to remotely reboot my V2 Hub and spent from the 22nd through the 26th of this month no knowing what was happening while I was in my other home in the SF East Bay Area I decided that next year I’ll just drain my Water System and shut off the heat when I take my yearly end of the year trip to see my extended families in CA. Good luck with your research!

do the components and manufacturing processes for these types of devices allow for the testing of one to be valid for all or most others?

Yes, each model is built with the same parts. So each device model should preform the same even though in each production run there will be some anomalies. I’ll be watching for anomalous readings too, I really want this test to be an accurate representation of the individual devices performance.

So the results are in, and I was kinda impressed with all of the devices. My baseline device is the Extech 445715-NIST Hygro-Thermometer with Nist. Certified accuracy. In short, I highly recommend calibrating all temp sensors for accurate results. 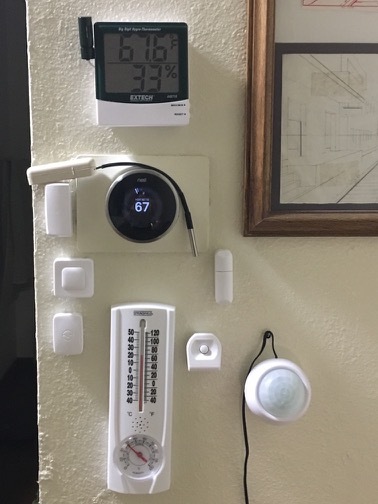 Temp changes were collected and compared via googlesheets thanks to @Charles_Schwer smart app Google Sheets Logging.
Polls were forced every 15min thanks to @geko smartapp Pollster

Note: All logged temps before line 250 are pre calibration

Accurate with in 1degF w/o calibration:

This is great news! This is something the community has needed. Thank you immensely.

I am particularly interested in the Iris contact sensors, since that’s what I have and will continue to get more of.

Will you please post a detail of what your test methods were and how exactly you calibrated the devices? 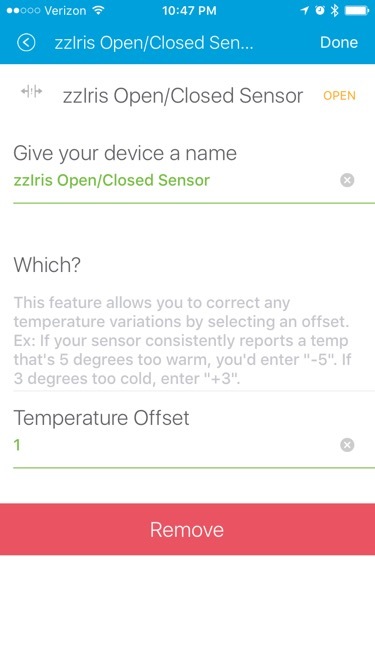 Calibration for each device was done by inputing the difference of a known good temp sensor (Extech Thermometer) to the actual device to the temp offset field of the device. In the example the difference is +1 deg. The devicetype I’m using is the SmartSense Open/Closed Sensor for the Iris 3320-L. If you have a Nest or I assume an Ecobee they should work just as well. I’ll have a better write up and pics later on this week.

Thank you. I’m using the Honeywell 8320 Zwave Thermostats.
I plan to put the Iris sensors in the rooms I want to put Keen Vents in.

I’m pretty sure your Honeywell is pretty accurate too. I’d place it next to your thermostat and see they they report differently than your Honeywell. Calculate the difference and put that number in the temp offset before final placement and you should be good to go.

Hey, what I did with mine, I lined up the sensors I was going to use in Keen controlled rooms, on my desk and monitored their temperature reading for two days against an Accurite sensor. I adjusted/calibrated the sensors up/down, the same way @sidjohn1 shows in the picture above, so they all showed the same temperatures. Accurite sensor may not be as accurate as the tool @sidjohn1 used, but the sensors you’re using are not created equal. Some may be off by +1 and some by -1. So to make them measure correctly you cannot assume that all Iris sensors need to be +1…

It looks like the Fibaro and the Aeon are significantly faster to reflect changes than any of the others?

The DS18B20 datasheet shows a +/- 0.5°C = 1°F accuracy over a wide range of temperatures (-10°C to +85°C = 14°F to 185°F).
To get a better consistency between all 13 of them, I did “calibrate” them, setting them all at the same place, forcing them to report at the same time, and using the 13-average value as reference.
After calibration, the “consistency” between all of them was better than +/- 0.3°C.
Talking about “accuracy” is tougher, since you have to be sure your reference thermometer is actually more accurate (like +/- 0.1 °C or better) than the one you want to calibrate, which unfortunately cannot be achieved by a hobbyist, unless he has access to laboratory equipment.

Since by the time I started to use the Fibaro FGK-101 it was not supported by SmartThings, I developed my own FGK-101 Custom Device Handler, which teached me lots of things along the way…

In addition to its accuracy, the Fibaro FGK-101 is small, and its battery (using my own custom Device Handler) runs for more than 1 year.

As a final note, I should warn people wanting to use the SmartThings cloud for their home temperature control : the ST cloud is VERY unreliable, missing plenty of messages, and sometimes needing re-initialization of hubs. If your rooms heating depends on that, you want to be sure the heating does not stop or goes crazy whenever a temperature update does not arrive, or arrives garbled (it happened too