They report temperature in fractions of a degree, and send the data to the hub when the temperature changes by .25F The sensors are quicker to respond to changes than others, and are reported to be more accurate than other brands. Net is that temperature can be controlled very well with these.

I am using custom SmartSense Motion sensors that are accurate, fast and report at .1.

Given that these are generally attached to exterior doors/windows, isn’t that a problem?

No, you just stick it up it anywhere you like, use it as a temp-sensor, and toss the door-sense magnet.

You can offset the temp on the sensor. I have a thermometer I take from room to room and calibrate the desire to it. It is place at the point I want so the sensor calibrates to the thermometer location

Temperature is just a number, in the end is the room too hot or too cold?

Yup, just need to pick a consistent placement and I think initial calibration is important if you monitor multiple rooms. If you have two sensors off by +/- 2, then it could be a game changer.

Why do they need to be “in the middle of interior walls at eye level?”

I understand Mike’s point about temp being just a number, and that you can find offsets that will work. Clearly the HSM200s work. In my house they’d mostly be behind furniture or too close to vents, though. I’ll probably opt for multisensors that I can mount in discrete places and suffer the limitations of running on batteries.

No, you just stick it up it anywhere you like, use it as a temp-sensor, and toss the door-sense magnet.

Seems an awful lot of money and fuss just to get temperature. Wouldn’t it be cheaper and more effective to use a multisensor in this case?

The lowes iris motions aren’t much more than a contact, and they are pretty dang small, and they fit nicely in corners, and they are available right down the street, and you can use them, well, for motion too…

A) The Fibero is a multisensor.
B) In my casual testing, the Fibero responded to temperature changes (up and down) much more rapidly than the ST Multisensor, and measures to .01F.
C) Unlike the ST, the Fibero is a physical temp-sensor chip, not a passive infrared sensor. Thus it measures air temperature rather than the temperature of IR-emitting objects in the room - one more reason why it is more accurate in re. how humans perceive room temperature.
D) Personally, I place temp sensors down near waist level, because I’m not much interested in the temperature near the ceiling, rather down where my feet and most of my body is most of the time.
E) The Fibero sensor is much smaller and less obtrusive than the ST Multi, and comes in decor colors.

A) The Fibero is a multisensor.

Really? I thought it was a reed switch with an optional temp sensor or contact sensor.

Regardless, I was thinking of the latest generation Iris Motion Sensor, which has a true temp sensor in it along with motion. They are tiny, though they only come in white. And, as @Mike_Maxwell observes, I can pick them up at the Lowes down the street for $30.

A) The Fibero is a multisensor.

Really? I thought it was a reed switch with an optional temp sensor or contact sensor.

Regardless, I was thinking of the latest generation Iris Motion Sensor, which has a true temp sensor in it along with motion. They are tiny, though they only come in white. And, as @Mike_Maxwell observes, I can pick them up at the Lowes down the street for $30.

The color of your choice, is only a rattle can away…

I bought Iris Contact Sensors online because they were only $13.98 each including free shipping from the store below and they too have temp sensors in them

I did the same thing. Now I am going to use them just as temperature sensors. Looking to modify the device handler so they just display temperature and not the status of open/close.

I believe there are some people who modified the handlers for their Iris sensors. If I am not mistaken, @MSpivey was working on his…

Just thought I would jump in as a new member of the SmartThings community. Great posts and work being done here across the board, thank you all !

Currently have switched every vent in the house to the Keen. Also have 3 HA platforms running for testing, Iris, ST and HomeKit. Integration/porting through HomeBridge for those devices without native HomeKit support. Have noticed a number of interesting things with the vents so far and am channeling this info back to Keen. Loving some of the device handlers and apps I’m seeing here as we’re all looking for full integration with just the right amount of granularity

Looking forward to trying out some of the apps here in testing.

Have noticed a number of interesting things with the vents so far and am channeling this info back to Keen.

Thanks for the reply. In short, a list of items to take a look at from things like vent calibration, smart bridge repeater mode setup and comms, scheduling, disconnect handling, SW to HW polling, vent registration to server backend, performance info regarding current comms between vent-bridge-cloud-app, temp sensor actions, platform to platform variances and expansion across those, ideas on deeper integration using the sensors and extrapolation of currently collected data etc to name a few

As mentioned earlier, currently testing across multiple HA platforms (Iris, ST, ported HomeKit via HomeBridge) and also across the Keen Bridge/App as well so am able to go at the vents from multiple angles which is good.

I will say that In real-world testing of this large number of vents and working closely with Keen, the entire team are dedicated to squashing any bugs as they are identified, listening to feedback and ultimately delivering a rock solid solution. They are actively engaged and working to knock down any problems that surface, quickly.

Hi @ashutosh1982. This inspired me to fit a 4x12 into a 4x14 opening. Instead of creating a wooden frame, I used a 1/4"x16"x20" clear plastic cutting board as a prototype. I cut it down to the size of the original vent size, and then cut out the opening for the Keen vent to fit in. Now that I like the look and overall fit, I’ll get a solid while board, cut straight lines, and finish it up by rounding over edges and corners. Here’s the prototype: 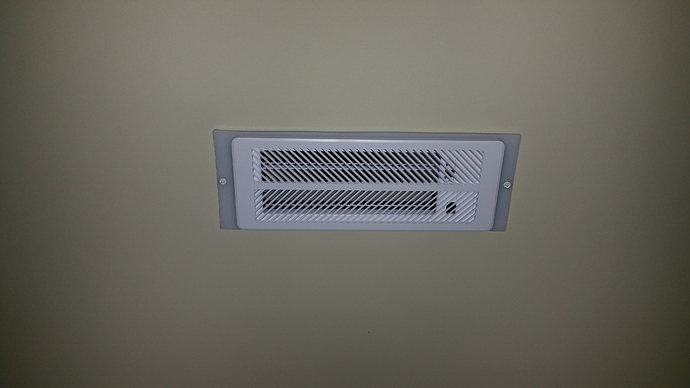 Bugs in what?, no one’s using their software or hub to any degree around here, the Keen ST device hasn’t been updated since it was released, unless there’s a usb port on the vent someplace (and there isn’t), there’s no firmware updates going to the vent via ST or anyone here.
And they haven’t posted to this forum in months…
So what are they committed to in relation to this platform?
Are they engineering a V2 vent with a freaking pressure sensor that is actually usable?
Deeper integration with what sensors?
The pressure sensor is absolute, making it worthless for its intended purpose, I don’t care how much big data you throw at it.
Some one prove me wrong in this regard, deliver an algorithm that is capable of determining a 300 pascal change in pressure from some baseline across all operating temperatures using the sensors in these vents.
And the only thing the temp sensor is going to tell you is that your HVAC is running…

Don’t take this the wrong way, I’m not picking on you here, but dude, they are feeding you a pile of hyperbole…

I’m using the iris contact sensor for temp. I calibrated these by setting them on tip of my thermostat and adjusting the offset over a couple of days. They are pretty darn accurate and icre for them reporting often. 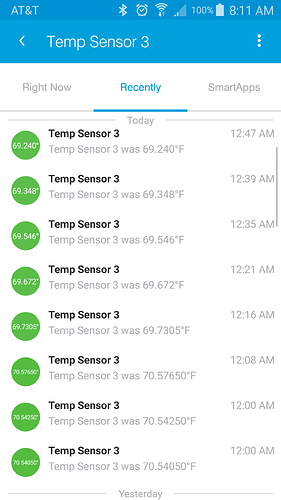