I am looking to do some automation in my home. I am leaning towards using Leviton Decora Smart Z-Wave Plus switches (DZ15S-1BZ), dimmers (DZ6HD-1BZ or DZ1KD-1BZ) and plug-ins (DZPA1-2BW or DZPD3-2BW) in conjunction with a Smart Things Hub and some sensors. I know that all of that is doable but I am concerned about the total number of devices that the hub can handle. I have been told anywhere from 232 to 1000 and I am ultimately not looking for more than 125-150 TOTAL devices; however, other people have warned me about potential lag or slowing with that many. Should I be concerned?

My other issues has to do with the way that my house is wired. I built it 18 years ago with the intention of using X10 for lighting control and integration. As a result, I have NO wiring for 3 (or 4)-way switching control. This is a huge hassle and something that I want to remedy with this upgrade since my X10 stuff is garbage. The bigger question that I have and that I have been getting all sorts of mixed signals and answers on is what can I use to install in place of my existing X10 transmitters (only wired with hot and neutral) to provide 3 (or 4) way control of switches either across the room or up/down the stairs? Can I simply install an additional DZ15S-1BZ (as a “controller” switch) that is connected only to power (hot and neutral) and NOT to the lighting load and have it communicate through the ST hub to control the switch attached to the lighting load? If so, would I only use the switch DZ15S-1BZ even if I wanted to turn a dimmer on/off? Can I have that “controller” switch turn on or off multiple lights through programming…using them as ALL off for rooms, floors, the entire house? Would the on and off be programmed as separate functions…there are places where I prefer NOT to have the on work but rather just the off?

Does anyone have any idea if the VRCZ4-M0Z can be used with the ST Hub as a multi-button controller? That looks like it wold be a great device but one of my suppliers makes a specific note in their catalog that it is NOT compatible with ST; however, I have seen mention of it here?

Are there any other in-wall controllers that work well?

I appreciate any help that anyone can offer. I am not a super techie but I have some basic knowledge. I have a skilled electrician doing my install and a 14 year old who has helped me start "playing with just a couple of sensors and plug-in modules with my ST hub.

That said, smartthings is a multiprotocol platform and you can also have zigbee devices, Some specific LAN devices including a Logitech Harmony home and a Phillips hue bridge, some cloud to cloud devices, etc. So there are members of the community who have 300 or more total devices, but they aren’t all zwave.

@johnconstantelo has one of the larger installations and may be able to say more about his experiences.

More commonly in the community people will buy one of the auxiliary switches that has its own Z wave radio, such as the Linear/go control WT00Z, which is designed not to control a load and use that. So you press on the switch, it communicates to the hub, and then the hub does whatever you have set it up to do through your automation rules. Which could indeed be controlling lights on other circuits or changing the mode or running a routine or whatever.

And as long as it is not wired to the load you can certainly have pressing the top do one thing and pressing the bottom do something else.

There are also several dozen other devices you might consider, some of which are battery operated. The remotec 90 is particularly popular because it has eight separate buttons, each of which supports tap, double tap, and long hold, giving you 24 total functions. And it can be labeled, which is nice for visitors. All for the cost of about $45. 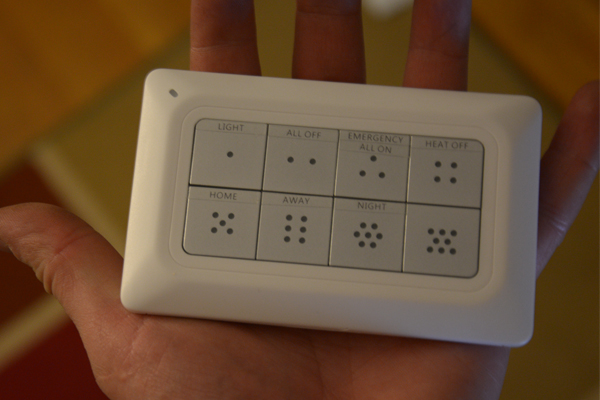 See the following FAQ for discussion of a number of other possibilities as well. You might see something there you like. Some of these are wall mount, some of these are tabletop, some are battery operated, and some are mains powered, so read the descriptions carefully.

The VRCS4 can be made to work quite well with smartthings. The VRCZ4, however, is an older device which relies on zwave command sets which just don’t really work in a multiprotocol environment such as smartthings uses. It’s not impossible that someone got it set up so that pressing a button on the Z4 would cause a Z wave lamp in the same room to go on or off but smartthings wouldn’t know that you had done it (so the app would get out of sync), you couldn’t use it for devices on the other side of the house, you couldn’t use it for any other smartthings function. It’s just not a good match.

But the S4 can communicate its button pushes to The hub, which then opens up a whole different set of possibilities. So there are community members using that one.

Thank you! That GoControl switch might be just what I am looking for. I am even considering their switches since the pricing seems much more favorable than Leviton. I do have concerns about LED lighting control. When I asked their tech support about the maximum wattage for their 500W and 1000W dimmers, they told me that they were intended for incandescent only? Lots of comments on Amazon about using them with LEDs and I can imagine who in the heck is still using incandescents? Any thoughts on their switches?

Thank you! That GoControl switch might be just what I am looking for. I am even considering their switches since the pricing seems much more favorable than Leviton. I do have concerns about LED lighting control. When I asked their tech support about the maximum wattage for their 500W and 1000W dimmers, they told me that they were intended for incandescent only? Lots of comments on Amazon about using them with LEDs and I can imagine who in the heck is still using incandescents? Any thoughts on their switches?

You have to check the specifications for each model. Some, indeed, are rated only for incandescents – – those will be the older ones that do not have a neutral wire. Most of the newer ones will be rated for LEDs as well, however they will be rated at a different level. A much lower level.

It’s very important to understand this to keep from burning out your switch. Although when they are operating LED bulbs use much less current than incandescents, when they start up there is an “inrush current“ which is very very high.

Consequently, it’s quite common to see a switch rated for a load in LEDs that is about 1/3 of the load in incandescents. That’s to allow for the inrush current. But since the typical LEDs only carry a load of about 1/6 that of an incandescent of similar lumens, it all works out.

Just make sure that when you check the specifications you are using the actual wattage load of the LEDs, not their “equivalents.” 9 W LED counts as 9 W – – not as its 60 W equivalent when looking at the load specifications.

I am ultimately not looking for more than 125-150 TOTAL devices; however, other people have warned me about potential lag or slowing with that many. Should I be concerned?

Nope, don’t be. I’m bouncing up at 300 devices and doing fine. Just make sure to plan things well with repeaters, and install your devices starting closest to the hub and work outwards towards the furthest most device.