I need some help with Aqara Single Wall Switch (With Neutral).

I have this switch associated with Smartthings HUB with custom device handler. I also have some IKEA TRADFRI On/Off Button. All of these works fine, but any IKEA Buttons controls the Aqara switch! If I press IKEA “I” button, the Aqara turns on, If I press the “O”, it’s turns off.

Somebody met this problem?
Can I send a raw command to switch to turn a whatever parameter to disable this?
What can I try?

Not to hijack…which DTH did you use for the button? Link? I just bought a couple.

For the IKEA, I use the officially DTH, for the Aqara switch, I haven’t been found on the internet right now, but I committed to github:

I modified the original DTH, because it’s used child devices, but I needed only one, because of thw number of buttons I have.

Late to the thread, but: I’m experiencing the same problem (same hardware as @PAndras, but different software), and came to the same conclusion.

Funnily enough, I have two IKEA Tradfri On/Off buttons, and only one of them interacts with the Aqara Switch!

My setup is using Deconz, and the IKEA Switch that is interacting with the Aqara Switch is the one that happens to mesh/connect via the Aqara (named “TV-plug”). It’s a messy screenshot, but it paints the picture. 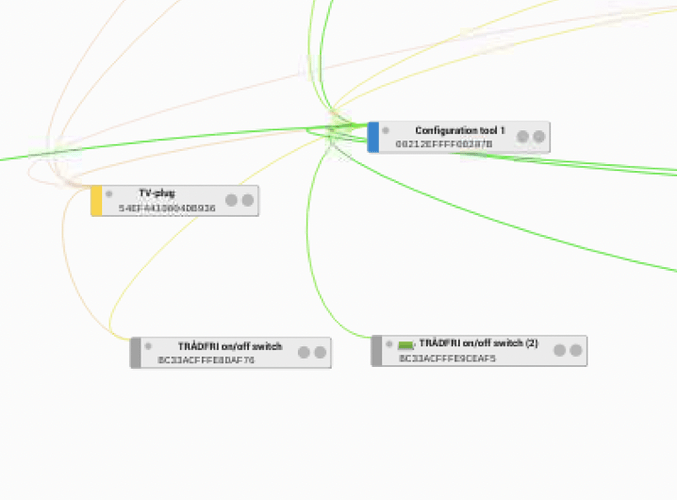 Did anyone figure out what to do to stop the IKEA and Aqara switches from interacting with each other? For now I’ve removed the Aqara Switch from the network, but it would be nice to be able to include it again.

change the zigbee group of the button. See “Zigbee binding” for more info.