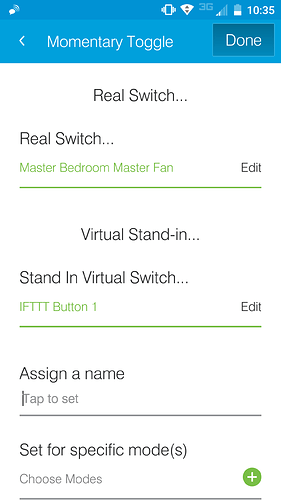 The push button will be the virtual switch and whatever switch (ie bedroom light) you want to toggle off and on will be your real switch.

ahhh, got it. it finally hit me. this works great. especially with the DO button. thanks!

It’s actually @bravenel code that I modified to work with a push button. So I could turn lights on and off with a misfit flash.

Hi Robert, I just picked up a Misfit Flash today on a whim (it was $6, so I couldn’t just leave it there

Is the code posted earlier in this thread all I need to use the Flash as a button to trigger IFTTT?

Through the app for the Flash it connects directly to IFTTT and you use IFTTT to turn on a switch in Smartthings.

With IFTTT you can only turn on or turn off a switch, the code above allows you to turn on and off a switch.

Ability to trigger a routine (routine as action)

Presence as a trigger

Dim level as an action for devices that support it

Ability to detect a failed routine and to remediate it.

SHM intrusion as a trigger.

Clear intrusion as an action

Lars, I’m new to ST and the items echoed above missing as triggers/actions were relatively quickly seen by me as a product shortcoming.

I’d like to build this out but need to keep complexity at a level where other non coding family members are comfortable creating automation. IFTTT provides that.

Bonus: Ability to create a momentary tile or virtual switch from within IFTTT. Dimness ,Effects, and Color changes not affect the current power state of a bulb; LiFX’s channel has this option.

What I’d really would like it if someone at SmartThings would just go through all the other HA IFTTT channels and make sure any supportable feature is added. WeMo, Hue, LiFX, etc. all have slight differences and ST should be able to do emulate most of them even if the device itself can’t.

I would like to trigger a lifx scene with an Ifttt recipe when a virtual momentary button that turns on my appletv harmony activity is pushed.

I can’t. I tried. Maybe if I make it a virtual simulated switch instead of button?

I’d really like to see Hourly as a trigger. For example, Smartthings won’t write to a Google Drive file, whereas I want to log the temperatures in different parts of the house hourly. So I’d like to write a smartapp that polls the temperature every hour and then triggers IFTTT to log that temperature into Google Drive (which IFTTT does really well). I can write the smartapp (it isn’t done yet) but I can’t get IFTTT to accept a trigger from My Smartapp because it only accepts known triggers

[quote=“Hugo_Minney, post:32, topic:10568”]
For example, Smartthings won’t write to a Google Drive file
[/quote]You might want to take a look at this project:

Unfortunately, the author is not developing for ST any longer and pulled the app (I have it running very well, but it’s licensed under Apache 2.0 so I can’t re-distribute it). But it directly accesses a Google Sheets file and logs ST events.

Apache 2.0 so I can’t re-distribute it

If anyone wants it, I’d be happy to post it.

If you look at the original thread, Post #125, @jlv has put a link to the groovy code on github. Log events to Google Sheets [see post 154 for current Github repo and v1.1]

I am new to ST community so excuse me if this topic has already been discussed. I would like to see a “lost/re-gained power / Internet connectivity” trigger so that I could create a reset routine based on the current state of devices.