Im hanging off buying my first Nest & some Protects on the back of seeing v3 launched in the USA. Really wish it would be announced for the UK market already as now is the time of year a Nest would be really bloody useful lol.

I wouldn’t hold my breath waiting for a UK release. From what I’ve read, the firmware is the same it’s just got a larger display & supports 5GHz Wi-Fi. Any firmware updates should generally get sent to V2 devices too.

Its the 5GHz wifi and larger screen im hanging in for… I am working towards killing my 2.4GHz network off at the earliest opportunity, investing into Nest kit now that is unlikely to swapped out for a few years would hamper this

Not a deal breaker (and definitely a first world problem) but would be a real frustration if the V3 did come out in the next month or two. I guess when OAuth is fixed (and i get SmartTiles / SharpTools etc) i may just jump as it would be easier to get value from the V2

And yes i am aware the protect is 2.4

16 posts were split to a new topic: LiFX without OAuth (UK)

alex@smartthings.com - the CEO who was kind enough to give me his email address on Twitter when I hijacked their marketing… He hasn’t acknowledged my email, so may appreciate a few more users dropping him a line

Hi there, I’m also trying to connect and not getting anywhere. Are there any updates on this that anyone knows of?

Guys. Can we keep this thread clean, or ST may think we forgot about the problem. BTW how’s fixin’ going?

Guess you just joined… the latest info , such that it is, is all on this forum if you have a look around. I don’t think SmartThings will think we forgot !!

I regard this thread as pretty much the OAuth topic - and therefore any temporary workarounds seem pretty much on topic. The fact that it’s titled IFTTT was just the first of many things that are broken without OAuth. SmartTiles, LIFX etc. I hope people find the content useful in that context. However separate threads on workarounds could be created and linked from here if the moderators prefer, which might be tidier ?

Discussion of individual device types or other workarounds should be given their own thread with a post placed here linking over to it. Code discussions and troubleshooting can then be referred to that thread.

One of the best things about SmartThings is that it is not limited to a kit of fixed devices. With the exception of the hub, everyone has different set ups. So to keep the forums easy to use for everyone and interesting, anything on a detailed level which is device or model specific needs to go into its own thread. Not only does it keep this thread cleaner, it makes it much easier for people coming in new to the category to find those specific device types and workarounds.

The people working on a workaround for Netatmo for the UK have been doing this very successfully, for example:

Currently, UK users (and I guess Europe) connect to European servers rather than the US ones, and apps like the Netatmo (Connect) seems to be broken at the moment. In the meantime, here’s a temporary workaround for the impatient! WARNING: You have to be comfortable with logging into the SmartThings IDE, setting up a new Netatmo DEV app, creating/modifying smartapps and possibly device types. I would also suggest reading @JDRoberts awesome guide beforehand if you haven’t messed with the IDE yet: Right, let’s get on with sorting out netatmo in ST: Go to this link and login to start creating a Netatmo DEV app: http://dev.netatmo.com/dev/createapp In the “Create an application” page, just fill in what you like for the app name and description e.g. smartthings connect, agree to the …

Thank you for your help in this regard.

We are close. I am sorry that we have been quiet on this but I am going to provide you guys with insight as soon as I have something more to share. It shouldn’t be to much longer.

I am writing the documentation as we speak

Thanks for the update @slagle - sure would be nice to actually get this working soon!

Thanks Tim, it’s appreciated. When we say close, are we talking “oh, I can see the port over there” close, or are we talking “Yep, we’ve just got to get past Greenland on our rowing boat, at least we’re nearer the UK than America now” 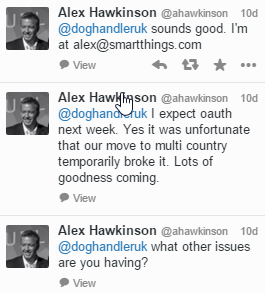 So, it looks like this might be working now, been able to authorise properly but yet to try a routine out! Other apps now have my hub showing correctly where they didn’t before and I no longer have to log in twice…

@mohawk_matt what mobile OS are you running? @Arron_Forde could you try SharpTools again and see if you can authorize now?

I just authorised it using a web browser through the IFTTT website, IFTTT now shows as a smartapp within SmartThings and I could select all the devices I wanted to allow it access to. I’m on iOS9. When you sign into the SmartThings site now (graph.api.smartthings) you no longer have to click on locations and sign in a second time it automatically logs you into the eu site 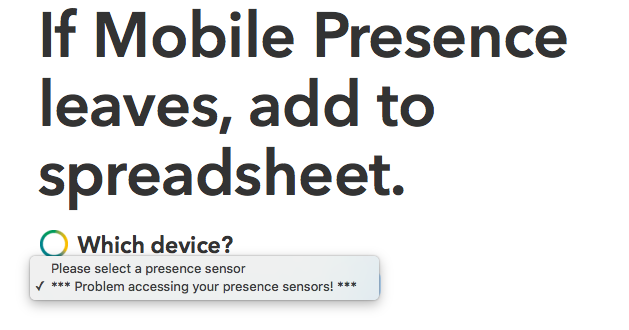 Just tested this! It WORKS!

Have you actually got something working, any recipes I try can’t actually access the required devices

Never mind… Jumped the gun! Hit the same snag you did!

EDIT: I have also noticed that it is now actually authentication against the US server, which must have some kind of federated authentication over to the EU servers.

Getting there ST, I have to give you that!