@HA_fanatic @professordave - I am aware of a few devices that create havoc on the zwave mesh network at times. Typically it happens when there is a short blackout / brown out, or something along those lines. Devices in the general area start having issues, and cycling power at the breaker typically fixes it along with several network repairs. Each network repair seems to decrease the errors until it is supposedly error free.

I excluded a couple Zwave Controllers (Zwave Tool Box and HomeSeer’s Zwave Stick for ZFlash) that kept popping up as those do not need to be included at all times. I am also eliminating all classic Zwave devices and replacing them with Zwave Plus or Zigbee 3.0 devices regardless of current issues.

Other devices that I have suspicion about are Zooz Power Strip v1/v2 (I have both) and Aeon Smart Switch 6. In the past I have had a number of issues always in close proximity to these devices. They are all likely chatty devices but I believe I have toned the reports down as much as possible (I need to check but time is always scarce). However, the large number of failure started 25.22 so I am trying to get a sense of whether it is a system issue or a network/device issue. It sounds like I have a local issue as you do not seem to have any issues.

Not long ago, after a few excruciating days of unresponsive devices (when everyone was reporting issues with Fibaro devices) I had a total blackout for about 2hrs at night. The next day everything slowly started working as normal. Other than the network repair errors, things appear to have been working fine since then.

I have around 110 Zwave Devices, so hunting for the one causing trouble without something clearly not working right is hard. I am also not seeing a clear pattern in the failures so I am not sure what section of the house to focus on.

If I can figure out how to use Sigma Design’s PC Controller software to query the route of the devices that are having issues, maybe I can find what it causing trouble. I have not had a chance to explore that yet. The Zwave Toolbox shows me a route for devices but I need to find out whether that is the route of the device to the main controller or to the secondary controller in the ZWTB. 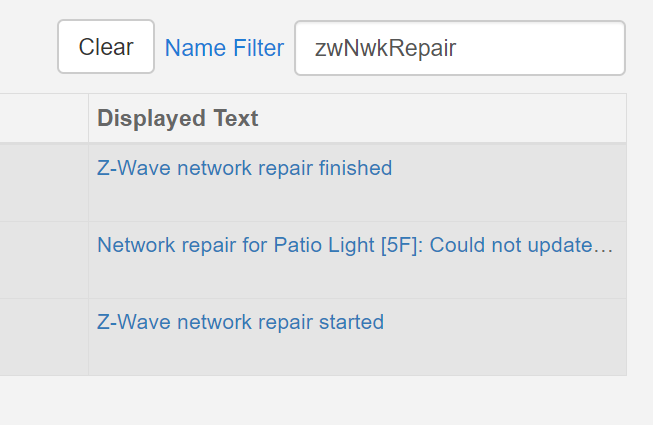 Problem seems to have gone away. Maybe it was indeed one of the two secondary controllers… or just a coincidence.

With the latest update I’ve had several of my device show up as offline. They non responsive in the app and will not update to current status. I’ve attempted a zwave repair, unsuccessfully.

The highlighted items below are the problems. The zigbees are just dead batteries.

Hi @bamarayne, I use to have this happen more often than I’d like. Typically rebooting the hub would do the trick. I never determined root cause, but I’ve not had that problem since I’ve moved the majority of my devices to zigbee.

moved the majority of my devices to zigbee.

@bamarayne rebooting and/or flipping the breaker works for me.

Yup, since the beginning of ST. If I knew then what I now have experienced with zigbee reliability and performance, and my woes with zwave over the last few years, I’ve would have switched a long time ago.

I’ve would have switched a long time ago.

I am right behind you lol I thought I cannot use Zigbee reliably due to overly congested 2.4 band in my neighborhood, but seems like I have managed to find the right channel, as my Zigbees have been going strong lately.

That’s what I did, and it’s been so reliable for so long that I’ve forgotten what my last major incident was about. The GE zigbee switches are super star performers, and I have them everywhere!

If I could just find a zigbee replacement for my home energy monitor, sirens, water meter, garage door opener, and a couple Qubino ZMNHAD3 devices, I’d be zwave free.

Ha! That’s where I am too

Cannot seem to find a suitable HEM to replace the Aeon Labs one, nor a garage door. Been thinking to go with Sense, but that still leaves me with the “ancient” GoControl opener

Are the zigbee GE smart switches/dimmers instant reporting? Or are they like the old GE zwave which do not report state?

My problem is, if I replace my old GE switches I wouldn’t be able to drink my coffee waiting for them to report. And then there is the maintenance, no repairs, no pulling air gaps and flipping breakers. I wouldn’t know what to do with all that free time…