@cbaumler, any plans to make the new iMagic motion sensors (they were the newest Iris device) local vs cloud in any of the 25.x releases?

Not that I know of.

Yup, it is now reporting correctly, thank you!

Not caused by this hub FW update. The Crees got a FW update themselves a while back (once a recent hub FW update allowed OTA updates for them) and it hosed them.

Not sure if anyone else is having this problem. Google didn’t show anything when searching. I’m currently experiencing that the lights (cree bulbs, home depot) are flashing randomly in the house when off… so midnight, 3am, 5am… pick a time and it happens randomly. What I can tell is that it seems to only be Cree bulbs as I have Sylvania ones in the halls, do not flash. So the bulbs will come on and off for a brief moment at full power. Ultimately, it wakes my 2yr old, so I’m at a point of wanting to know if other people are having this problem before I rip and replace 12+ bulbs and costs $ I shouldn’t be spending.

Yes, I reported this too in this thread … Someone posted saying they were seeing a config command being sent by ST to the device at the time of the flash. I am seeing the same and I’m waiting for the next occurrence then I’m sending details off to ST Support. I recommend you do the same.

Bummer was hoping this was the zwave issue that was in this. Ok, then I’m very glad I replaced the Cree bulbs in the bedroom.

was hoping this was the zwave issue that was in this

Note that the Crees are Zigbee.

Ths may have been previously reported, and has nothing to do with the Beta test.

I have a Cree bulb that was updated on ST, but was recently moved over to my Hubitat hub. The bulb occasionally flashes on the Hubitat system.

Ah yes, sorry. I’m sick as a dog with this stupid head cold my brain is fried.

I just noticed that my hub shows as Zigbee insecure rejoin is off (classic app) and Secure mode is on (new app). I don’t remember changing that - I think I would have left it insecure.

Now that you mention it, I think mine flipped itself to the same status. I rarely check it,
So can’t say definitively if the hub firmware did it or not, but insecure was turned on at some point in the past.

Where’s that setting in the new app?

Nope, not there… I checked multiple times. Now I’m getting a little worried about the sync process they did last night. 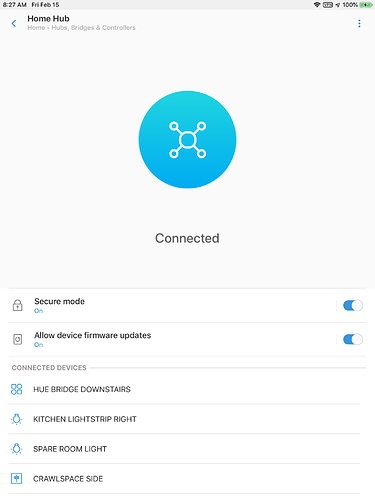 Yeah, I remember seeing that prior to last night’s sync/rebuild process that ST did, but it’s gone this morning. I’ve reached out to the tech working my ticket, but he’s on MST so it may be a bit.

Once my hub downloaded the beta it disabled Zigbee insecure rejoin and Zigbee OTA firmware updates. You can re-enable both in the IDE, but after a hub reboot they will flip back to disabled.

I’m not getting a good feeling about this. Looks like they misspelled my location’s name last night… Classic and Connect have different location names, but all the device’s are sync’d. This is going to be a long day.

Finally! I’m not sure it it was the power cycle, firmware (unlikely), or ST working in the background, but it’s finally there in the new app. Whew.

Since 0.25.18 has now been released please use this thread for future comments: Hub Firmware Beta 0.25.18