“How to use Aeotec Dimmer to send commands to control Zigbee bulbs?

There may be a thread that addresses my question but given “state of consciousness” flow of many of the threads it is often hard to know or find!

Here is what i am trying to achieve. i want to set a z-wave parameter on my Aeotec nano dimmer (may need to use z-wave tweaker not sure) to such that switch 2 (S2) does nothing other than send some message to my smarthings hub that can then be actioned to turn on or off 3 permanently powered Zigbee bulbs. As they are Zigbee bulbs i want to keep the power to them, i want to use a physical switch not smart phone because… well most folks just find a switch easier. I am using the nano dimmer because i want a toggle light switch and not a paddle and finally i cant use a “standard” Z-wave switch because most of the wiring in the old part of my house does not have neutral. So my question i guess is what parameter would be a “good” one to send to the hub how do i use tweaker to set that and is if that wasn’t enough how would i then use a smart lighting automation or webcore piston to turn of the afore mentioned zigbee bulbs. Thanks

It should be doable, because that device does allow you to have the second switch not control the load but only send messages to associated devices. Which could include the hub. That’s how most button controllers work on the SmartThings platform.

I don’t know if anybody has done it, but hopefully if someone has they’ll see the topic title and chime in.

The manual is available at the following site. 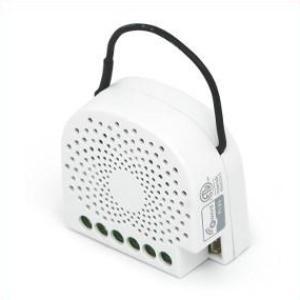 I’m going to tag the smartest house just in case they know for sure one way or the other.

Oh, I forgot to ask if you are in the US or the UK. In most places in the US as long as this isn’t for an attic light, it should be fine. But the UK has some very specific safety laws regarding switches and lights, and this type of virtual connection is not always allowed. So it does make a difference.

This is for the US and i assume you mean isn’t for an attic light?

The manual lists all the parameters in the last three pages, pages 20-22.

I know it’s highly technical, and you will probably need some assistance in figuring it out, but it’s all there. 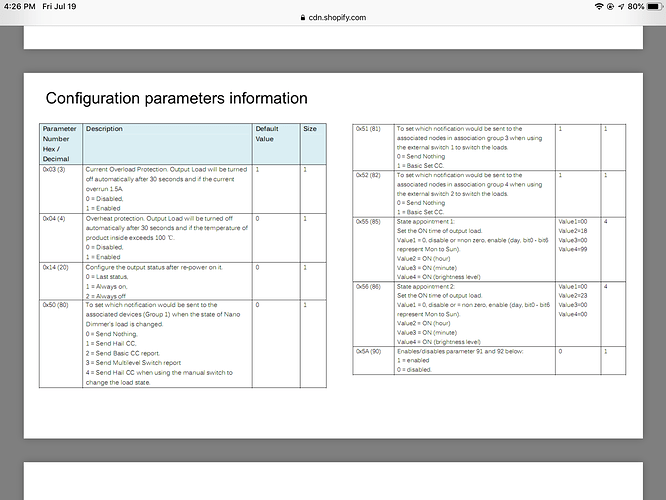 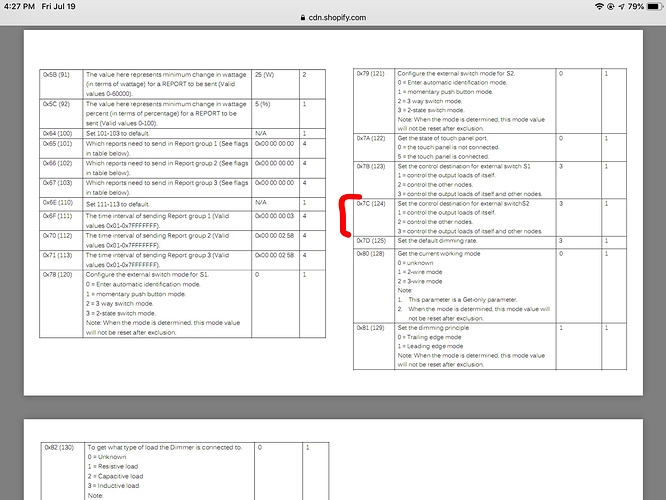 It also lists the association information earlier, which you will also need.

Why use zwave parameters? Why not just have the bulbs mirror the switch?

If it allows for direct association, it could be set up via parameters but ONLY if the other device is Z-Wave as well. Since we’re talking about ZigBee bulbs here, direct association won’t work. You’ll need to program an automation in the Smart Lighting app to mirror behavior between the Nano dimmer and the bulb as @Automated_House suggested. The wiring needs to be modified in a way where there is nothing connected to the load terminal on the nano and the connection to the bulb (load) is always powered (so connected to power line).

Thanks all I am using sw2 on the nano Dimmer sw1 I can mirror but I couldn’t see a way in smarthings using the lighting smart app to expose the status of switch 2. If I use switch 1 in a no load configuration the device does not seem very happy, I am assuming that it needs some kind of a load and well frankly I am using switch 1 to togle the status of the device and the “regular” light connected to it. In essence I am looking to use S2 to simply provide a state change. But thank you for all the suggestions thus far.

Assuming S2 is exposed as its own device in SmartThings, here is a mirror rule using Smart Lights 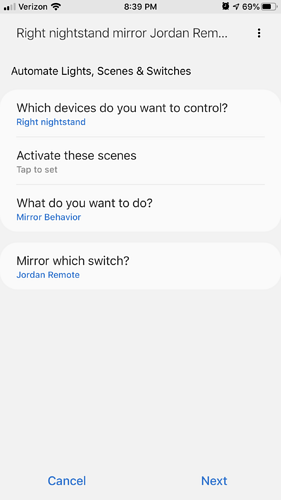 If it allows for direct association, it could be set up via parameters but ONLY if the other device is Z-Wave as well. Since we’re talking about ZigBee bulbs here, direct association won’t work. You’ll need to program an automation in the Smart Lighting app to mirror behavior between the Nano dimmer and the bulb as @prjct92eh2 suggested. The wiring needs to be modified in a way where there is nothing connected to the load terminal on the nano and the connection to the bulb (load) is always powered (so connected to power line).

It can be done with zigbee bulbs and it doesn’t have to be done in the way you’ve described.

Think of how smartthings implemented the minimote. Or how people use some of the other zwave button controllers.

The association is made between the trigger device and the hub, not the zigbee bulb.

Then when the hub receives the association notification, it sends the message via zigbee to the bulb.

Again, the minimote is a good example. Note that this is not zwave local scenes and it is not zwave central scenes.

Essentially you make the S2 switch look like a button to smartthings.

But it depends on the exact requirements of the use case.

The wiring needs to be modified in a way where there is nothing connected to the load terminal on the nano and the connection to the bulb (load) is always powered (so connected to power line).

Look at the parameters again, particularly the one that I have marked in red in the post above.

You let the S1 switch input control the load. You set the parameter for the S2 switch input to “2” so that it sends out the basic command to the association group but does not control the load. So the Switch 2 on the wall essentially becomes a dummy switch. That setup is what should make the Switch 2 Look like a button to smartthings. While switch one remains a regular switch that turns the load on and off.

But this is going to take a custom DTH to expose the S2 input as a button.

Before we get too far down this rabbit hole, this can be done more easily with the Fibaro dimmer 2, because it can use central scene commands instead of association for the second switch input. @anon36505037 has described this method elsewhere in the forum.

So if you could use the nano you have elsewhere and are willing to buy the Fibaro for this purpose, that would be a lot easier.

Great input thank you and of course on hindsight I should likely have bought fibraro but I didn’t and to some degree now rather than just buy one I kind of want to work this out… Curiosity being as it is both a blessing and a curse!

I know this is field tech thinking, but I think it’s worth considering, in part because it’s much less vulnerable to platform changes. Choice is good.

). The way we usually recommend executing remote control of bulbs is by hardwiring the bulbs to power line so they’re always powered and creating the mirror automation in SmartLighting, it seems to be the fastest way.
Not sure about reliability from the platform perspective, it’s possible that the pocketsocket solution may be more bullet-proof. We’ll do some testing around it in the lab to see if it could be a better alternative for our customers going forward. Thanks for the tip!

The use case in this thread is unusual because the OP wants to use the nano for two completely separate purposes.

That’s pretty easy with the Fibaro micro because its S2 function sends a central scene command.

But the nano just uses zwave association in group 2 for the S2. That makes everything more complicated.

You can certainly put the hub in group 2 and catch the wall switch activity that way, but that’s when we have to get into all the button controller stuff. You can’t do that with most hubs, but you can with SmartThings, but because it’s dependent on ST features rather than standard zwave commandsets, you’re vulnerable to ST making some unannounced platform changes (like they once did with the “number of buttons” parameter) and the method breaking.

So the alternative is to let the nano work as intended, by using the S2 input from the dummy switch to control a nearby zwave device through direct association in group 2. In this case, I’m suggesting a plug in pocket socket.

And if, like the zooz zen25, it has two independently controlled plugs, you can use one side as the proxy for the zigbee bulbs and the other as a regular smart zwave Outlet. Just stick a baby proofing filler tab into the side being used as a proxy so people don’t get confused. 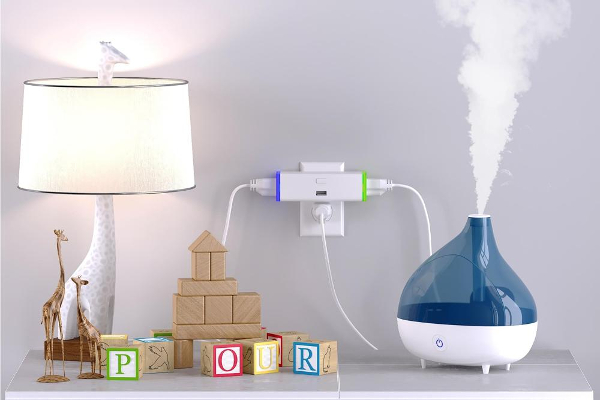 That way you don’t need any of the button controller code.

Dummy wall switch is wired into the nano’s S2 input.

Nano Parameter 0x7C is set so S2 input does not control load.

Use Standard SmartThings features to create automations so zigbee bulbs (wherever they are) mirror the Pocketsocket. This is the same Automation that @Automated_House suggested above except that the trigger device is the pocketsocket, not the nano.

Again, it’s a field tech’s approach, but it should work.

Note for clarity: “S2” in this note refers to the Nano’s second switch input, which is labeled S2 on the device. Nothing to do with the z wave S2 security protocol. 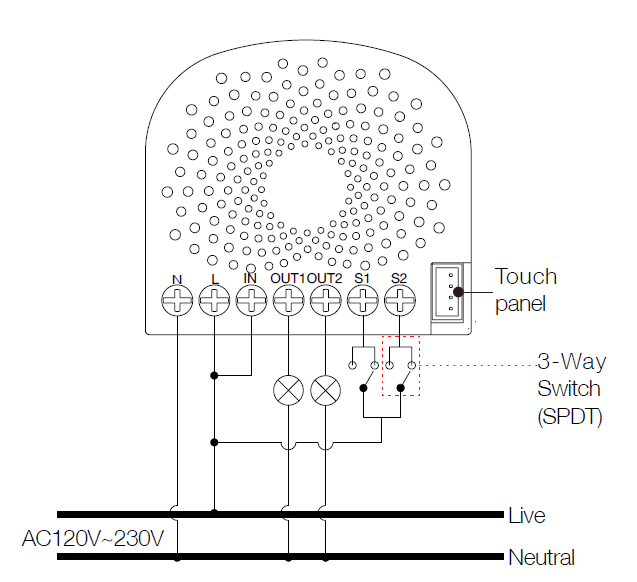 Why use zwave parameters? Why not just have the bulbs mirror the switch?

The nano device has two external switch inputs. While S2 is usually used for the auxiliary in a 3 way setup, there is a parameter which allows you to configure it so that the second external switch does not control the load, but only controls other devices via association.

I had checked this with aeotec and they said its only possible through Z-WAVE association. I ended up changing them for Fibaro dimmer 2s. This scene capability can then be exposed as buttons within the driver.

Thanks everyone for all the input! So i have the z-wave association up and running with a pocket socket and all seems good, i have also picked up a fibaro dimmer to try on a a different “switch and light set up” with similar requirements and also to see which approach i like best. ;- i am guessing the fibaro may be the better approach as i am not using up a pocket socket if i dont need to.