How do you organize and keep track of all the batteries?

I’m finding myself ordering many different types of batteries for the various devices I have (CR2, CR2032, CR2045 for ST / other home automation, various watch batteries for… watches), and am always losing them or reordering ones that I already have.

I’m good on AA and AAA batteries, as they usually come in a somewhat serviceable container to begin with (costco 72 packs, etc.), but I’m wondering if anybody has a good system or organizer for keeping track of all the different sizes of batteries that one may have on hand.

This is what got me wondering:

But it mainly centers around the types of batteries I don’t need help keeping track of. There’s only a tiny holder for a few coin cell batteries at the top.

We need more pluggable devices. Not all of my IOT devices, but many of them I would power off AC if I could.

I am even considering creating adapters for them but always get busy with other things.

Back in the day when I used a lot of batteries for work we always just stored them in the original packaging in a small case with lots of drawers and labeled the drawers on the outside.

As long is the case was at normal room temperature, not too hot not too cold, there was no noticeable degradation, but we went through batteries pretty quickly, so I doubt if any stayed in the drawer for more than two months.

I still make it a practice not to own more batteries then I can use in six months so I don’t have a huge inventory. My batteries are still stored in the original packaging in label drawers, but inside a locked cabinet at home.

As I’ve mentioned before, I replace batteries on a regular calendar maintenance schedule, rather than waiting for them to run out completely. That way I have continuous performance. I may pay a little more in batteries, but it’s worth it to me to never have a good device fail because the battery was dead.

If you do keep coin batteries, make sure you have them secured where kids can’t get to them.

How do you determine the calendar schedule?

How do you determine the calendar schedule?

A combination of manufacturer’s specs and experience. We re-charge all the regular used rechargeables once a week on Mondays, The ones with an expected battery life of less than a month. Then there’s another group that gets recharged on the first Monday of every month.

For the ones with replaceable batteries, we set the first schedule based on manufacturer specs for a replacement at 25% of battery life and then test when we get to that point to see if things are going as expected. The ones with replaceable batteries all get replaced on the first Monday of the month in which they’re due, but some are due every six months, some every twelve months, etc. (And, yes, there’s a spreadsheet and calendar notifications to say which devices are due for replacement that month)

It works pretty well for us. Other people might prefer to get battery notifications from the device itself and review everything once a week, but one of the advantages of using the schedule is that I can order the batteries in on and “as needed” basis based on the next week’s schedule. ( and, yes, calendar notifications for that too.

So on Monday, my helper recharges the rechargeables. On the first Monday of the month, he also changes the batteries on the devices that are due to be changed that month. And I add replacement batteries to the shopping list for the ones coming up for replacement the next month if we’re low on anything. Monday is our “household maintenance” day.

We do a lot of little stuff then.

I use a combination of these:

This durable 4 bin storage container is great for storing nuts, bolts, beads, lures and other small objects. The container features convenient see-through lids for easy viewing of contents and quick selection of the part or tool you need. 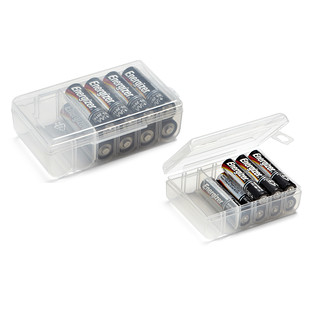 I’m sure you know this, but just to clarify for those who don’t, small bins are great but you should still keep the batteries in their original packages or in some similar non-conductive wrapping to keep them from touching each other ( or any other metal) while they’re in the bin.