How do I change my V3 from a router to a bridge?

I have used three v3 hubs as mesh routers for a year or two now. I recently changed Internet providers, and the new provider has a combination modem/router. I would like to switch my hubs from routers to bridges. How do I do that without doing a full reset and losing all of my paired devices?

Could you check the model number on the bottom of the hub and let us know what that is?

The V3 hubs are not Wi-Fi mesh routers. They are standalone home automation hubs that can connect to the internet via WiFi but are not able to act as a WiFi router themselves.

There are two models of SmartThings hubs that can act as Wi-Fi mesh routers, the original “connect home“ and the current “SmartThings WiFi with Plume.”

The exact model number will depend on the region that you are in.

I must be confused. I am by no means an expert. I have the SmartThings WiFi with Plume. The model number is ET-WV525. I have the 3-pack.

I must be confused. I am by no means an expert. I have the SmartThings WiFi with Plume. The model number is ET-WV525. I have the 3-pack.

Ok, For that one you want to change your ETWV 525 from router mode to “bridge” mode. You will do that through the plume settings on that model. There used to be an official SmartThings support article on how to do that, but they’ve since taken it down. So I think your best bet is to contact Plume support and ask them.

There is one article on the Samsung support site that says you need to use the Plume app for “advanced network settings, “and I’m pretty sure that’s where the choice between router and bridge is, but again, my knowledge is limited to what I’ve read. Hopefully if someone else has a better answer, they’ll post. 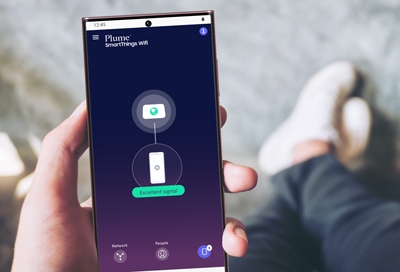 Use the Plume app with SmartThings Wifi

The Plume app lets you check your wireless network, manage guest access, and use extra options like port forwarding. Consider this your map to the Plume app.

So again, I would try Plume support. Just don’t tell them that you have a “V3“ hub: you don’t. Give them the hub model number instead.